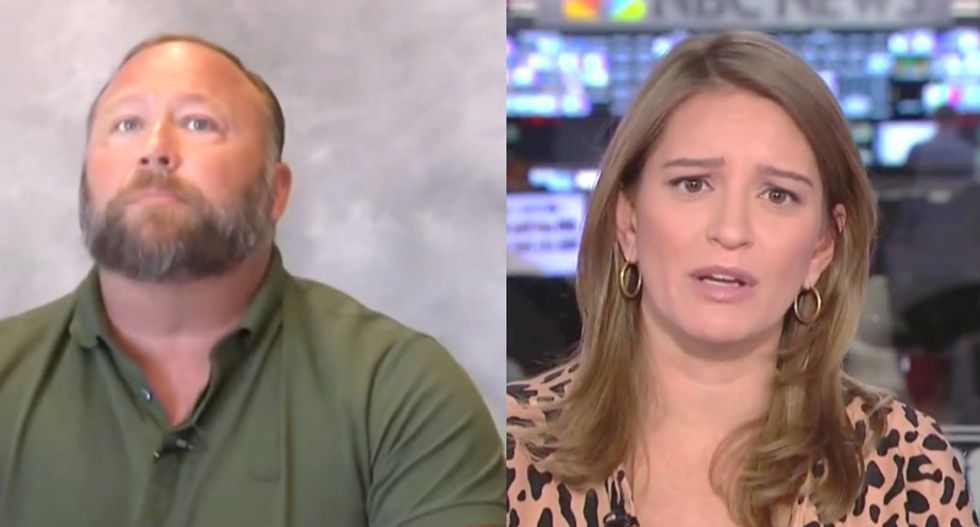 MSNBC's Katy Tur was visibly angry on Wednesday, as she utterly destroyed Alex Jones, "the poster boy for fake news" in an epic rant after the conspiracy theorist claimed in a court deposition that "psychosis" is what caused him to go after the families of the children murdered at Sandy Hook.

"Before we get to that explanation, let's look at what led the three-hour deposition," Tur said, laying out how Jones, who faces multiple lawsuits, "repeatedly called the Sandy Hook shooting a hoax," claimed the victims were "crisis actors," and spread a rumor that one mother was getting "paid to pretend that she was grieving for her 6-year-old son's death."

"In a court-ordered deposition uploaded to YouTube by one of the parents' law firms, he diagnosed himself with a mental illness," Tur went on, cutting to footage of Jones' statement, in which he compared himself to "a child whose parents lie to them over and over again" who no longer knew "what reality is."

"You are not a child, sir. You are a grown man who made money off of all of these lies," Tur erupted immediately thereafter. "I suppose that psychosis also led you to believe that the government was behind the Oklahoma City bombing and 9/11, or that Hillary Clinton was running a child sex ring out of a D.C. pizza shop, or that Glenn Beck was a CIA operative."

"For years Alex Jones has been spreading this kind of misinformation. He is literally the poster boy for fake news," she continued, and said despite being thrown off social media and facing potentially ruinous lawsuits, Jones was "continuing to spread his lies"

"On his show last week --last week-- he floated the theory that the recent suicide of Jeremy Richman, the father of Sandy Hook victim Avielle Richman was faked," Tur said, quoting Jones. "'I mean, what happened to this guy? This whole Sandy Hook thing is like really getting even crazier.'"

"So did psychosis make him say that, too?"