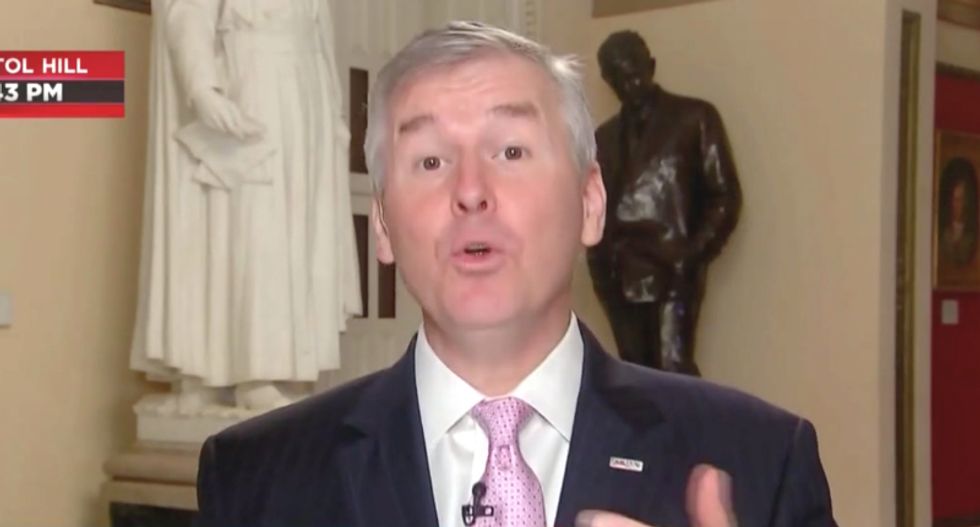 Georgia Republican Congressman got defensive and sarcastic with MSNBC's Katy Tur on Tuesday, when the host responded to his claim that the House Ways and Means Committee was "politicizing" President Donald Trump's tax returns by reading him the relevant section of the tax code.

Woodall said he saw no value in seeing Trump's taxes, and immediately tried to change the subject.

"What most folks don't know is that every single president is audited every single year," he said, waving his hands and blinking quickly. "The tax professionals are poring through every line of his returns, so if you have any worries about anything untoward happening, that's all being sorted out."

"But do tax professionals know about leverage though and potential conflicts of interest?" Tur asked, clearly unsatisfied with Woodall's response.

"We don't have a mandate that folks release tax returns. Traditionally presidents have, this president decided not to," Woodall said, in a second attempt to change the subject. "What we've never seen is a Ways and Means Committee politicize the tax code and target an individual U.S. citizen."

"Let me read the tax code and the law that they're citing," Tur replied and began reading the relevant section that clearly mandates that the Treasury hand over the returns. "That's directly from the code. If the code says it, how can they be politicizing it?"

"Ooooh, you've read the code word for word," replied Woodall in a voice dripping with condescension. "What you didn't point out is while this has been on the books for decades and has been used for legitimate public policy purposes, it has never been used by either party to target a political opponent."

"Hold on, it's not just Democrats who said they would like to see president's tax returns. There were a number of Republicans who said it in 2016 as well," Tur shot back and cut to footage of Lindsey Graham from the previous Thursday saying anyone running for president in 2020 needed to release their returns.

"I assume in the future if there's a Democratic president who you might be concerned about having a conflict of interest, maybe with a foreign power or maybe here at home, you won't really feel the need to see that person's person's tax returns?" she continued.

Woodall responded with what could only be described as "mansplaining", culminating in an agitated demand to see House Speaker Nancy Pelosi's taxes.