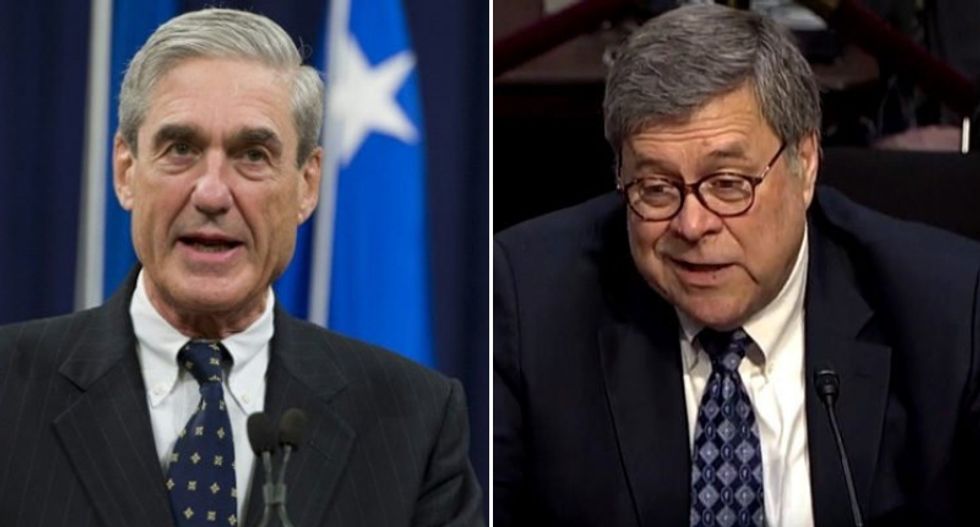 Marcy Wheeler, an independent investigative journalist who specializes in national security, on Sunday revisited the extraordinary statement special counsel Robert Mueller’s office made in the wake of a BuzzFeed report claiming Donald Trump “directed” Michael Cohen to lie to Congress — and explained how it paved the way for Attorney General Bill Barr “to put his thumb on the scale of injustice.”

To recap: in January, BuzzFeed News reporters Jason Leopold and Anthony Cormier, citing “two federal law enforcement officials involved in an investigation of the matter,“ reported that Trump “directed his longtime attorney Michael Cohen to lie to Congress about negotiations to build a Trump Tower in Moscow.”

In an extraordinary move, Mueller’s office disputed the BuzzFeed report, issuing a response less than 24 hours after the BuzzFeed story was published that called into question the outlet’s reporting.

“BuzzFeed’s description of specific statements to the Special Counsel’s Office, and characterization of documents and testimony obtained by this office, regarding Michael Cohen’s Congressional testimony are not accurate,” former special counsel spokesman Peter Carr said in response to the report. Carr had originally declined to comment when BuzzFeed sought an initial response from the special counsel’s office.

Wheeler’s article on Sunday revolved around an eleventh-hour effort by Cohen and his lawyers last week to keep the former Trump fixer out of prison. Thursday, BuzzFeed published materials, provided by Cohen to Congress, which purported to show justification for BuzzFeed’s report. According to the documents, after Cohen provided testimony to Congress claiming discussions about Trump Tower Moscow ceased in January 2016 (despite those discussions having continued until at least July 2016), “Cohen received a call from Trump’s attorney, who congratulated him on the testimony – and said his ‘client’ was happy with Cohen’s testimony.”

Noting that, at the time, Trump and Cohen were in a joint defense agreement, Wheeler explained the claim “is not sufficient evidence to charge someone with suborning perjury.”

“Nevertheless,” she wrote, “this new evidence may explain why BuzzFeed remains confident in its characterization that Trump directed Cohen to lie.”

More importantly, it highlights the absurdity of Carr’s unprecedented denial. Per Wheeler:

“And here we are, not three months later, learning new details of how closely involved Trump’s lawyers were in orchestrating Cohen’s testimony while Attorney General Bill Barr (who had been appointed but not confirmed at the time of the story) withholds Mueller’s own view of those documents, and just weeks after Barr and Rosenstein >usurped the role of Congress to declare that the President’s behavior — including efforts, however inadequately supported by admissible evidence, to suborn perjury — does not amount to criminal obstruction of justice.”

“By ‘correcting’ a statement that seems utterly reasonable now, DOJ preserved the opportunity for Rosenstein and Barr to weigh in, however inappropriately,” Wheeler wrote.

The special counsel’s office obfuscation of BuzzFeed’s report handed Barr “the opportunity to put his thumb on the scale of injustice,” she added. And as Barr continues to withhold the full Mueller report, it remains to be seen whether the move was simply adherence to Department of Justice protocol— or a subversion of justice.

You can read Wheeler’s full analysis at emptywheel.net.