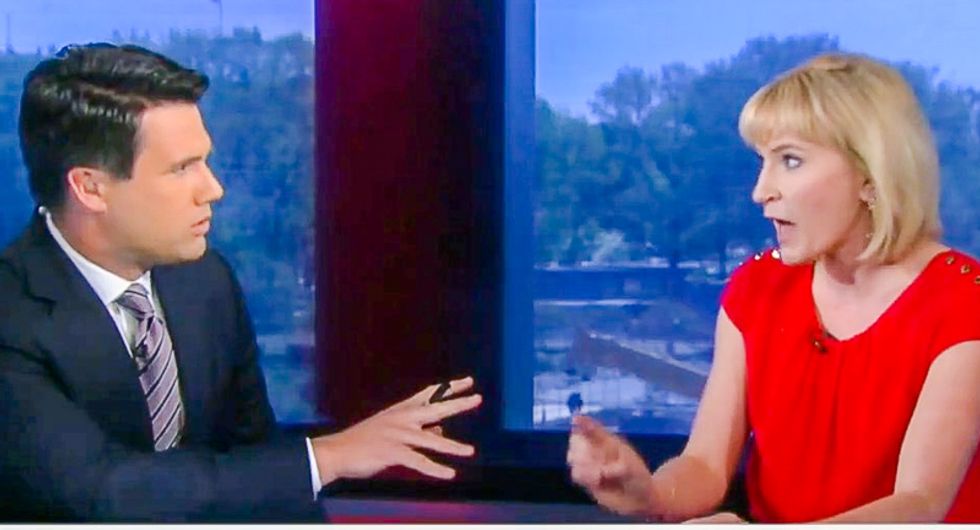 Republican National Committee spokesperson Liz Harrington lashed out at Fox News host Leland Vittert over the weekend after he asked her about evidence that President Donald Trump committed obstruction.

During the Saturday interview on Fox News, Vittert noted that some Democrats are considering impeachment hearings over evidence against Trump in special counsel Robert Mueller's Russia investigation report.

"They are going to overreach because the American people know there's no 'there' there," Harrington insisted.

"[The report] identified numerous links between individuals with ties to the Russian government and individuals associated with Russia... That's not 'didn't find anything,'" Vittert pointed out.

"This is 19 Democrat [sic] lawyers who were picked by Robert Mueller," Harrington said of the investigators. "You read page by page and there's innuendo and suggestions of impropriety."

"Not firing someone isn't obstruction," the RNC spokesperson insisted.

According to Harrington, however, Mueller's team accused Trump of "treason" for "two years."

"No, ma'am!" Vittert shot back. "Robert Mueller never accused him of treason."

"There was a dossier that said he was compromised!" Harrington exclaimed.

"Not one person in Robert Mueller's office ever accused the president of treason," the Fox News host repeated.

"If this report had been written about a Democratic president, I can't imagine you'd have the same feeling about it," Vittert added.

"The vast majority of Republicans are sickened by an out-of-control Obama Justice Department," Harrington remarked. "This is dishonesty from James Clapper, John Brennan, Jim Comey, Adam Schiff. That's the pervasive mess of dishonesty that Republicans are upset about!"

"But none of them are president," Vittert observed. "Isn't the president of the United States held to a higher standard?"

"Of course! He did nothing wrong!" Harrington shouted. "There was no collusion!"

"No!" Harrington cried out. "This is such a misconception. If the president wanted to fire Robert Mueller, he would have done it!"

"That's the real scandal here," she continued, cutting off Vittert. "They knew there was no collusion and yet they started the special counsel report anyway."

"Well, so far I haven't heard anything different than the talking points from the White House," Vittert scoffed.