In politics and gay? So what, say most US voters 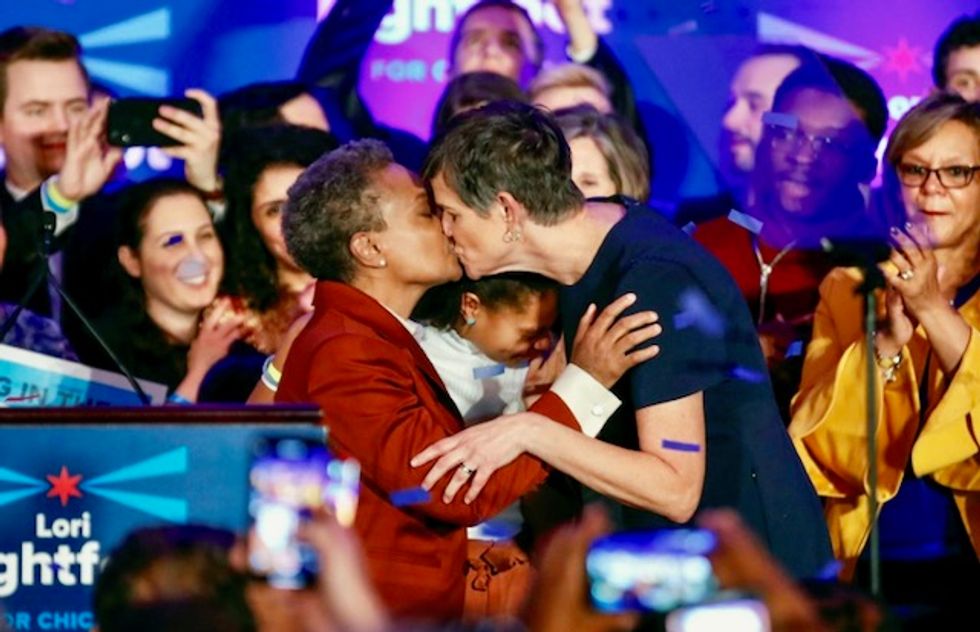 The election of Chicago's first black lesbian mayor and the rise to prominence of a gay presidential candidate have shown beyond a doubt that in US politics -- at least among Democrats -- being LGBTQ is now utterly accepted.

Another lesbian candidate just won the mayoral race in Madison, Wisconsin, while a third earned a spot in a runoff to be mayor of Kansas City, Missouri.

The latest victories come after a steady shift in cultural attitudes fueled a "Rainbow wave" of gay and lesbian candidates across America in 2018, even as Donald Trump's administration has chipped away at protections of the LGBTQ community.

The number of openly gay elected officials nationwide nearly doubled last year, to 682, according to the Victory Fund, which supports the election of LGBTQ candidates.

Young Americans are "watching us, and they're seeing the beginning of something, well, a little bit different," Lightfoot said in her victory speech.

"It doesn't matter who you love, just as long as you love."

That acceptance is taking hold nationwide, empowering a community that has been traditionally under-represented in US politics, where sexual orientation and family values have often stirred debate.

As recently as 2006, polls showed a majority of Americans were uncomfortable or had reservations about a gay presidential candidate.

Today a combined 68 percent are either enthusiastic or comfortable with such a candidate, according to an NBC News survey this week.

In politics and gay? So what, say most US voters

Pete Buttigieg, the mayor of South Bend, Indiana, is aiming to become the first openly gay American ever elected to the presidency

Congress now has a historic number of openly lesbian, gay or bisexual members, all Democrats: eight in the 435-seat House of Representatives and two in the 100-member Senate.

"As the nation becomes more accepting of LGBTQ people, voters are focusing less on a candidate's sexual orientation and gender identity and more on their issue positions and their vision for the future -- and they tend to like what they see," the Victory Fund's Elliot Imse told AFP Wednesday.

But while LGBTQ Americans make up 4.5 percent of the population, they only hold 0.1 percent of elected offices nationwide, he said.

"So it's incredible progress being made, but the numbers that we have to make up are quite extraordinary as well."

The shift in American attitudes is particularly good news for Pete Buttigieg, the 37-year-old mayor of South Bend, Indiana and a rising star presidential hopeful.

Buttigieg, a Harvard graduate who put his mayoral duties on hold to serve in Afghanistan as a Navy intelligence officer, is openly gay, and has spoken warmly about his marriage to Chasten Glezman.

With voters knowing he will be rock solid on equality issues, Buttigieg is freed up to address concerns more germane to presidential contests, such as the economy, climate change and foreign policy.

Several LGBTQ Democrats embraced that approach, and it worked.

Gay lawmakers have been in the Republican Party in the past, but its lack of an openly LGBTQ lawmaker in Congress is glaring given that Trump became his party's first nominee to mention gay rights in his nomination acceptance speech.

But Imse said Trump has surrounded himself with officials whose anti-LGBT bias has driven his agenda, including moving to bar transgender people from the military, rolling back Barack Obama's protections for LGBTQ workers, and supporting the right of businesses not to serve gay couples in the name of religion.

Trump's vice president, conservative Mike Pence, has aggressively opposed both abortion and LGBTQ rights as a lawmaker, becoming a hero of the religious right.

Pence served as Indiana governor during Buttigieg's first years as mayor, and they clashed on social issues.

Buttigieg said he looks forward to the day being gay is seen as the least interesting thing about a politician.

"Shouldn't it just be that I, like, show up at some event, my date's a dude, and everybody puts it together and nobody cares?" he posited on a podcast last month.

"I think that's the destination. But I know that we're not there yet."