From Reagan to Zelensky, stars who went into politics 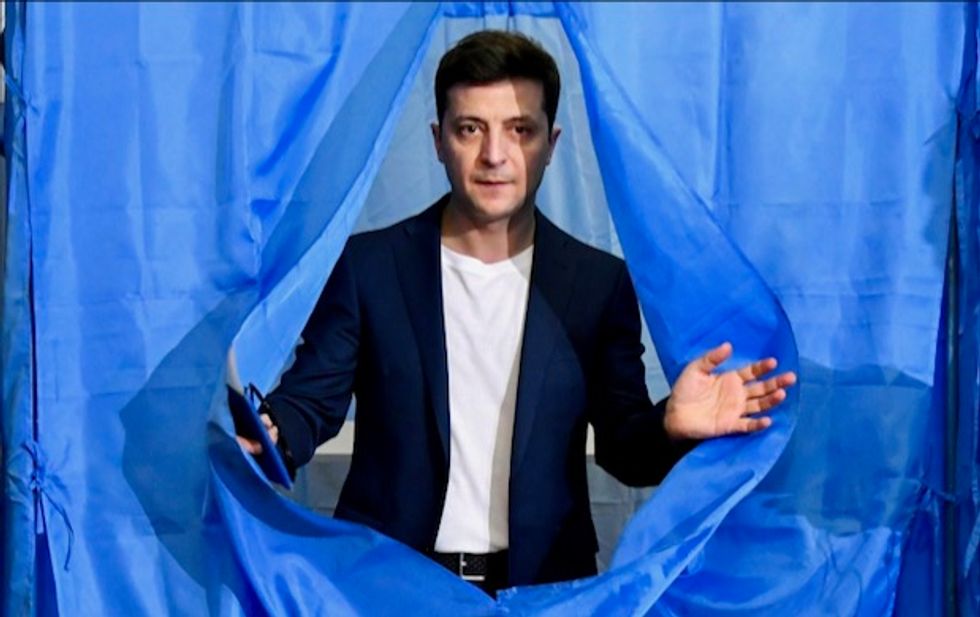 Reagan, a Hollywood actor for more than two decades, was the first cinema star to become head of state.

He was elected governor of California in 1966 before starting the first of two terms as the 40th US president in 1981.

Hollywood star Arnold Schwarzenegger later also made the leap from cinema to politics.

The bodybuilder and action hero was Republican governor of California, the richest and most populous US state, from 2003 to 2011.

He was elected president in 1998 but driven out of office in 2001 by a popular revolt after corruption accusations.

In Guatemala, Jimmy Morales -- a former TV comic with no previous political experience who campaigned on anti-corruption promises -- was elected president in October 2015.

Also a cinema producer and TV personality, Morales is famous for his 2007 film "A President in a Sombrero" in which he plays a country bumpkin cowboy named Neto who nearly gets elected president by accident.

AFP/File / Andreas SOLARO Former Italian prime minister Silvio Berlusconi started out as a singer on cruise ships before going into construction, then building a TV empire -- then getting into politics and becoming Italy's leader three times

Despite his regular brushes with the law, the man known as "the immortal" for his longevity in politics led the Italian right for more than two decades.

In January 2017 US real estate mogul and reality TV star Donald Trump, whose surprise election shocked the world, entered the White House without any political, diplomatic or military experience.

The 45th president of the United States hosted the TV show "The Apprentice" between 2004 and 2015.

In Lithuania, musician Vytautas Landsbergis led his country to independence from the Soviet Union and was in 1990 elected as president.

In Haiti, popular carnival singer Michel Martelly -- known to the country's youth as "Sweet Micky" -- won the April 2011 presidential election with more than 67 percent of votes, ruling until 2016.

- From sport to politics -

He was forced to resign two years later after being accused of plagiarism in his doctoral thesis.

AFP/File / JACK GUEZ Liberian President George Weah, elected in December 2017, had a career as a star footballer in the 1990s

George Weah emerged from Liberia's slums to become a superstar footballer in the 1990s and was elected president of the west African nation in December 2017.

The only African player to have won the Ballon d'Or, he entered politics at the end of the country's 1989-2003 civil war, winning his first political job as a senator in 2014.

In August 2018 former cricket champion Imran Khan, idolised by millions of Pakistanis for having led the national cricket team to its only World Cup victory in 1992, became prime minister.

AFP/File /Idi Amin Dada was a heavyweight -- originally in the boxing ring, then later in politics when he became dictator of Uganda after a 1971 coup

Well away from the electoral process, Ugandan dictator Idi Amin Dada, who seized power in 1971 in a coup, was a former heavyweight boxing champion.

Others have combined jobs in literature and politics, like Senegal's poet and author Leopold Sedar Senghor, who became the republic's first president upon independence in 1960, and Vaclav Havel who in 1989 won post-communist Czechoslovakia's first presidential election.