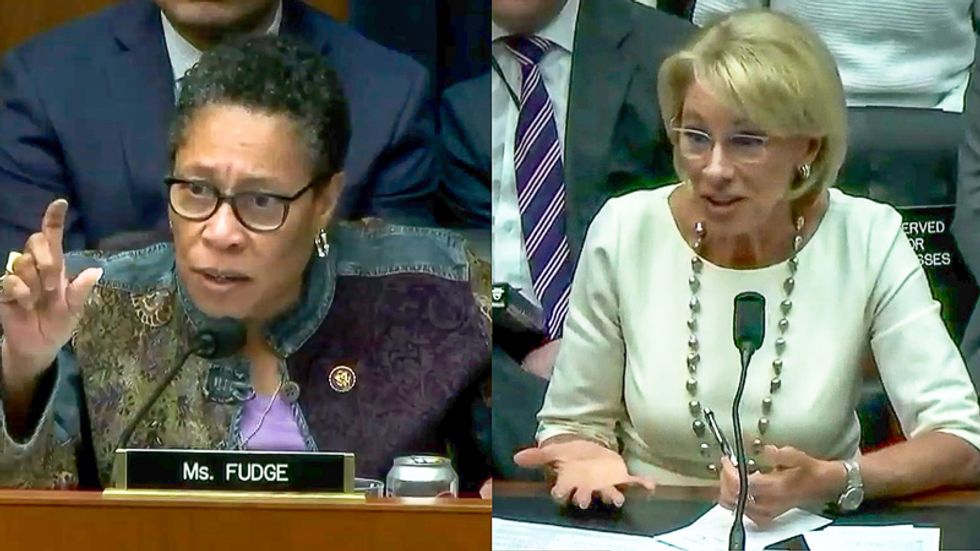 In a hearing for the House Committee on Education and Labor, Fudge pressed DeVos on whether she understood her role as education secretary.

"Do you realize that it is you responsibility to educate every child in the United States?" Fudge asked.

"It's my responsibility to be the secretary of education," DeVos replied.

After DeVos refused to answer, the Ohio congresswoman accused her of "evading."

"My concern is that you spend so much of your time focused on vouchers, how do we fund religious and private schools," Fudge explained. "And then you come up with something called the Education Freedom Scholarship, which by any other name is a voucher."

"If you give a one-to-one tax credit for [private school exemptions], it's going to create a $5 billion hole in the Federal Treasury," Fudge explained. "That's $5 billion that could be spent on education and other things."

Fudge argued that DeVos' "Freedom Scholarship" is not "free."

"This freedom is going to cost us $5 billion a year, $50 billion over 10 years," she noted. "There is a cost to everything we do. Yours just happens to be $50 billion to the Treasury."

"I just wish at some point we would be honest with what we are doing," Fudge lectured the secretary. "And we would just tell the American people is that what we're doing with this is we're creating a shell game to fund private and religious schools and their providers using taxpayers as the middle man."

"It is nothing more than another attempt to invest in public education," Fudge concluded. "And that is why I asked you the first question, which you couldn't even answer: Do you represent all of the children of the United States? Is it not your job to educate all of the children? It wasn't a trick question."

Watch the video below from the U.S. House of Representatives.