Revealed: The beginnings of Gotham arch-villain the Joker 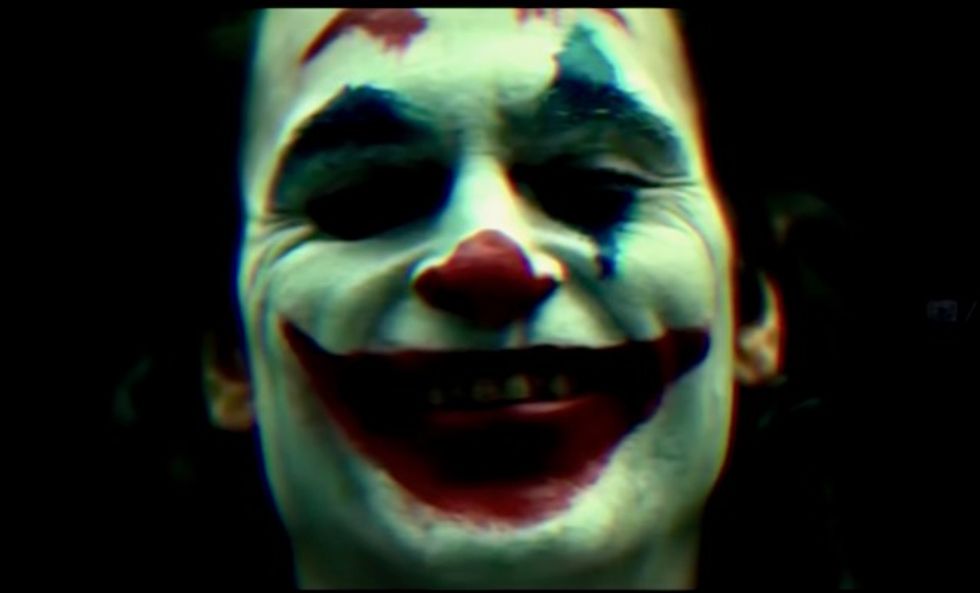 Warner Bros. gave fans their first glimpse Wednesday of the hotly-anticipated origin story for DC Comics' criminal crown prince the Joker -- with Joaquin Phoenix as the diabolical figure behind the creepy face paint.

The trailer for "Joker" dropped a day after the upcoming movie was previewed at the CinemaCon industry convention in Las Vegas, where Warner wowed delegates -- mainly movie theater operators -- with an upcoming slate that includes "It: Chapter Two," led by Jessica Chastain.

Phoenix's "Joker" is at least the sixth live-action interpretation of a character made famous by Cesar Romero and Jack Nicholson -- and taken up a level by Heath Ledger, who won a posthumous Oscar for the role in 2009.

Director Todd Phillips explores the roots of Gotham's villain, a man beaten down by the world, in what entertainment blog JoBlo called "a really dark and twisted character study."

"Joaquin Phoenix is living in the role and this will no doubt be another inspired and manic performance from him. If you're missing the 'dark' DC, then here's your medicine," it tweeted.

The trailer shows Phoenix as Arthur Fleck before he became an evil-doer: dancing with his mother, working as a street clown and being a victim himself, harassed and assaulted on a subway train.

"My mother always tells me to smile and put on a happy face," he muses. "She told me I had a purpose to bring laughter and joy to the world."

After a group of youths steal the store sign he is holding and smash it in his clown face, he asks: "Is it me or things are getting crazier?"

Only the trademark maniacal cackle presages the darkness that lies ahead.

"I don't have a lot to say about the film as it's still taking shape," said Phillips, a New Yorker known for frat house comedies including the "Hangover" trilogy and "Road Trip."

He told the annual gathering of producers, distributors and theater operators that much of the "chatter" about the movie had been inaccurate.

"But I suppose that's to be expected when you set out to make an origin story about a beloved character that basically has no definitive origin," he said.

"Joker," described by Phillips as a "tragedy," opens in October in the United States.

From the DC universe, Warner previewed the sequel to "Wonder Woman" and "Birds of Prey," for 2020, in addition to "Shazam!" which opens on Friday.

The Amazonian warrior Diana "is now at her full powers," "Wonder Woman 1984" director Patty Jenkins said in a video.

Other highlights of the Warner Bros. presentation included announcements and footage from "Shaft," "Space Jam" with LeBron James, "Godzilla" and "Detective Pikachu," who appeared on stage as a hologram voiced by Ryan Reynolds.

The horror segment left more than one delegate with goosebumps as the audience was shown a scene in "It: Chapter 2" where Beverly Marsh returns to her father's house and is surprised that an old woman lives there.

The sequel follows Beverly's "Losers' Club" decades later, with adult versions of the youngsters in the 2017 film played by Bill Hader, James McAvoy and Isaiah Mustafa, as well as Chastain.

The studio also plans to premiere "The Goldfinch," based on the acclaimed book about a child in mourning for his mother; an adaptation of the detective novel "Motherless Brooklyn," Edward Norton's sophomore release as director; and the drama "The Good Liar" with Helen Mirren.

August will see the release of "The Kitchen" with Elisabeth Moss, Melissa McCarthy and Tiffany Haddish, about the wives of imprisoned mobsters who end up learning the business of their husbands -- and become very dangerous.

AFP / VALERIE MACON Tiffany Haddish (L), who appears with Melissa McCarthy in "The Kitchen," says the film shows "so many layers to women"

"Everyone knows very strong women in challenging positions but you don't often get to see that in film," McCarthy said, adding that what she loves about the movie is that it shows "so many layers to women."

Haddish grew up in southeast Los Angeles and said she had tried to join gangs.

"But they wouldn't let me. I was too goofy."