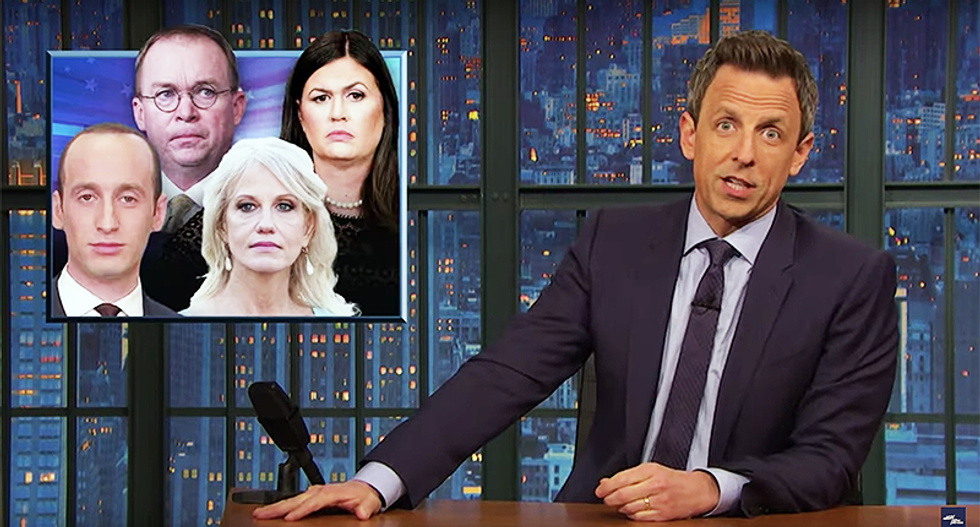 In a Wednesday "Closer Look" segment, NBC late-night host Seth Meyers knocked the president for essentially outsourcing his job to a staff of "weirdos."

In a series of tweets, President Donald Trump announced that it was useless to turn over any information to Democrats because they'd simply keep asking for more information. Because they'd never be satisfied, Trump said that he might as well not share anything about the Robert Mueller report. This was after weeks of pledging to make the report public. Over 80 percent of Americans believe it should be released for the public to view, recent polls show.

"Just say NO! We've got a country to run," Trump tweeted.

It's the latter that Meyers took issue with.

"OK, you don't have a country to run because you don't run it," he said. "You outsource it to your collection of weirdos while you go play golf with Kid Rock."

Meyers showed a photo of the musician with Trump on the golf course. Trump was clad in his typical golf shirt and pants, while Kid Rock was wearing a pair of pants made of an American flag.

"By the way, I'm glad to see Kid Rock respecting the flag by turning it as a fart-catcher," he said.

The host cited a senior White House official cited in a recent New Yorker piece that admitted there will likely be damning things in the report. Meyers called it obvious.

"Yeah, we know there will be damning things in the report because what we know publicly is damning," said Meyers. "Mueller's report could literally be a bunch of news articles about Trump stapled together with a cover-sheet that says, 'Remember This Stuff???'"

Meyers then moved on to try and figure out why Trump couldn't understand the difference between oranges and origins.

Amusingly enough, Meyers spotted the official transcript that the White House released of the remarks. Not even the person typing up the transcript seemed to know what to do.