'Someone is lying': CBS host broadsides Lindsey Graham after he says Trump didn't do 'one thing' to obstruct Mueller 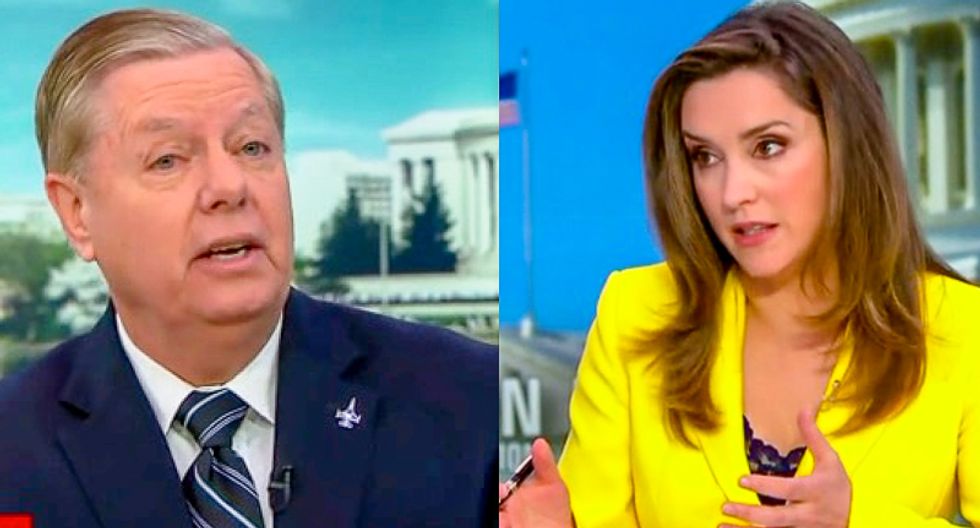 "Well, [Attorney General William Barr] gave a four-page summary, does the report indicate there was no collusion between the Trump campaign and the Russians?" Graham asked. "I think the idea that this president obstructed justice is absurd. He turned over a million documents to the special counsel, almost everybody around him testified. I can’t think of one thing the President Trump did to stop Mueller from doing his job. He never claimed executive privilege. My point of view, I have heard all I need to really know and I want to look and find out all of this happened."

"But on that point of attempting to obstruct justice or not," CBS host Margaret Brennan told Graham. "The president seems to want to continue to litigate this, because he came out this week and said and denied he had ever thought or told anyone to fire Don McGahn, the White House counsel, but that directly contradicts sworn testimony that was in the Mueller report, where Don McGahn said he almost quit he was so pressured to fire the special counsel."

"I think it is all just theatrics" Graham replied, dismissing obstruction concerns. "It doesn’t matter what he said to Don McGahn, it is what he did. The president never obstructed."

"It doesn’t matter that he is changing a version or someone is lying?" the CBS host wondered.

"If you're going to look at every president who pops off at a staff and, you know, asks him to do something that is maybe crazy then we won’t have any presidents," Graham snapped.

"But in terms of the firing this was Don McGahn White House counsel being pressured to fire the special counsel," Brennan pressed.

"I don’t care, I don’t care what they talked about!" Graham fired back. "He didn’t do anything. The point is, the president did not impede Mueller from doing his investigation."

"And it doesn’t trouble you that president is changing his version of events?" the CBS host asked.

"Name one thing that they did to stop Mueller from doing his job. If you can’t, then there is no obstruction," Graham opined.

"I am not going relitigate it," Graham added. "I don’t know how clear I can be, it is over for me. He didn’t collude with the Russians. Obstruction of justice in this situation is absurd. I fought hard as hell to make sure that Mueller could do his job and introduced legislation to make sure he couldn’t be fired. It is over."

GOP silence on Charlottesville was a 'dress rehearsal' for blowing off Trump's Jan 6th insurrection: conservative

In a column for MSNBC, conservative commentator and Bulwark founder Charlie Sykes claims that Republicans used the lessons they learned after the deadly Charlottesville protest -- when Donald Trump praised the white nationalists -- to duck responsibility to condemn the Jan 6th Capitol rioters.

Coming just days after organizers of the "Unite the Right" rally lost a multi-million dollar civil suit for the damage they fomented in Virginia, Sykes claimed that -- looking back at the GOP response -- it should be evident that Republicans' silence on Charlottesville was a "dress rehearsal" for dealing with the fall-out of the insurrection that threatened to topple the 2020 presidential election results and throw the country into chaos.