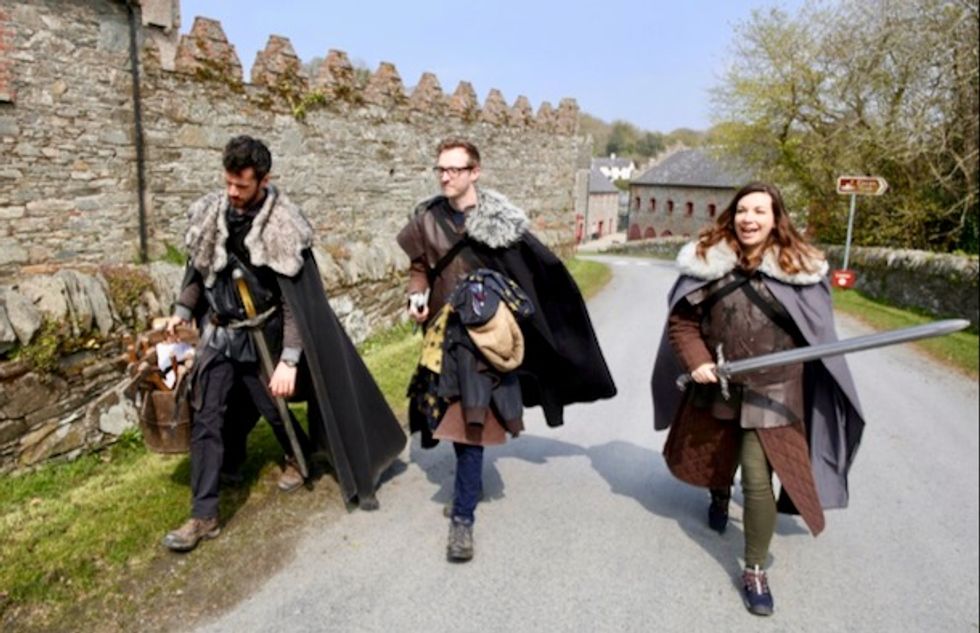 "Game of Thrones" fans take part in the tourist experience at the Castle Ward Estate in Strangford, Northern Ireland, the location of Winterfell in the hit TV series that has triggered a tourism boom in the British province AFP / PAUL FAITH

Since the blood and guts series began its rise to prominence in 2011, fans have started to flock to the coastal caves and ruined castles of the British province where much of the HBO television production was shot.

AFP/File / PAUL FAITH In this file picture, people walk along the Dark Hedges tree tunnel, which was featured in Game of Thrones, near Ballymoney in County Antrim, Northern Ireland

"Every new step is like something new, it's more than my expectations," 23-year-old student Mannur marvelled.

"It's a beautiful country -- Northern Ireland is just amazing."

One in six visitors now comes to Northern Ireland to visit shooting locations, according to their estimates.

Along the largely coastal trail, a short drive outside the capital of Belfast, that popularity is clear to see.

AFP / PAUL FAITH US 'Game of Thrones' fans take part in archery with Master of Arms Will van der Kells (L) at the Castle Ward Estate in Strangford, northern Ireland. Tourists come from around world to the visit the locations of the fantasy TV series

A steady hum of buses and coaches are marshalled in and out of parking lots on strict schedules, and sleepy village shops throng with tourists.

"The last week, I think on Saturday past, we had a bus with 24 nationalities on it," said tour guide Patrick Rogan at the mouth of the Cushendun Caves, the site of a pivotal plot point in the series.

"We had people from Patagonia, from New Zealand, from Japan, from Russia, from South Korea and Europe, so I think that tells its own story."

Since 2012 his employer -- the "Stones and Thrones" tour -- has offered daily outings out of Belfast, manned mainly by guides who have acted as extras on the show.

Today they run at least two full buses a day, he said, competing with at least four other companies offering a similar service.

Other more bespoke tour services offer immersive experiences -- axe-throwing, archery, and photo opportunities with a pair of wolves that starred in the epic series.

A popular comparison holds that "Game of Thrones" is to Northern Ireland tourism what "Lord of the Rings" has been to New Zealand.

AFP / PAUL FAITH A popular comparison holds that "Game of Thrones" is to Northern Ireland tourism what "Lord of the Rings" has been to New Zealand.

But Northern Ireland's very recent bloody past during the so-called 'Troubles' -- when 3,500 were killed in 30 years of sectarian strife -- makes the boom particularly welcome.

"The dark history that was here is coming out," said Irish actor Liam Cunningham, a stalwart character in the series now feted as the most expensive to ever be filmed for the small screen.

"The place is blooming, and for us to have this show here and be part of that transition is joyful."

- 'This still has longevity' -

Cunningham was speaking at the opening of a touring exhibition of costume and scenery pieces in Belfast, the same week as the new season of the series premiered.

A caption on one image reads "Views to die horribly for", whilst another reads "Sun, sea and savagery", referring to the show's reputation for bloodily killing off major characters.

They are testament to the canny local tourist board, making efforts to cement the link between their territory and the series.

"I think our association with such a global success helps to transform the image of Northern Ireland across the globe," said John McGrillen, chief executive of Tourism Northern Ireland.

AFP / PAUL FAITH French 'Game of Thrones' fans get dressed in costume for the experience at the Castle Ward Estate in Strangford, Northern Ireland

"In many ways that gives you PR that you just simply couldn't buy."

With the final season of "Game of Thrones" under way, the fever pitch devotion to the series may be about to end.

But with spin-off projects in the pipeline and a studio tour development due to open in Northern Ireland next year, the province still hopes for tourism revenues.

"We think this still has longevity," said McGrillen.