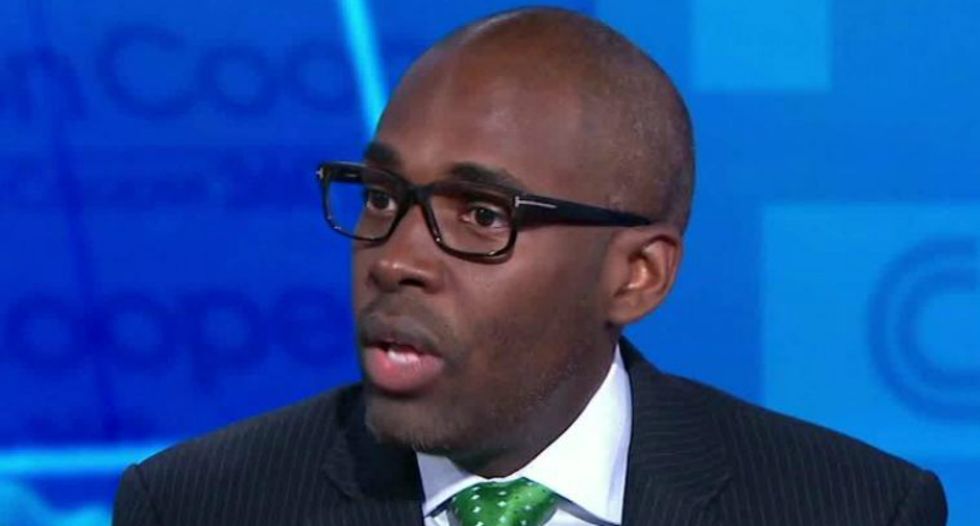 A Trump supporter fired from CNN after allegations of sexual misconduct were leveled against him wants nearly $10 million from his former employer for leaking the report that so damaged his reputation.

The Arizona Republic reported Tuesday that conservative pundit Paris Dennard has filed the precursor to a lawsuit against Arizona State University after findings from a 2014 internal investigation into sexual harassment claims were released by an insider to the Washington Post in August 2018.

Dennard argued in his notice of a claim filing that ASU did not find that he violated harassment policies when he worked at the McCain Institute for International Leadership but did show a "lack of professionalism" and violated employee conduct rules, the report noted. He was then "involuntarily separated" from the university.

The Post reported in August that the pro-Trump pundit once "pretended to unzip his pants in [a female employee's] presence, tried to get her to sit on his lap, and made masturbatory gestures," licked an employee's neck and whispered in an employee's ear that he wanted to "f**k her."

In his pre-lawsuit filing, Dennard and his lawyers argued that an anonymous ASU official "intentionally disclosed the report (and commented on it) in order publicly to smear and harm" the pundit, the Arizona Republic noted. In doing so, the school violated his privacy

The report added that Dennard was dropped by CNN, NPR and The Hill as a commentator after the allegations were published.

In the filing, Dennard's attorneys noted that while the pundit's career was on the rise prior to the Post report about the sexual misconduct investigation, "the first nine pages of Google results for Dennard's name now bring up the allegations."

Professional opportunities for the pundit have since "dried up," his attorney Timothy La Sota argued in the filing.

"This caused tremendous embarrassment to Mr. Dennard and his family," La Sota wrote.

"The claim arrived at $9.9 million in damages, including $7.7 million in lost future wages, $1 million for emotional distress, and costs incurred for 10 years of reputation management, attorneys and publicists of $10,000 per month," the Republic reported.

(Reuters) - The United States reported a 12% decline in new cases of COVID-19 last week, while vaccinations accelerated to a record 2.2 million shots per day, according to a Reuters analysis of state, county and CDC data. New infections have dropped for eight weeks in a row, averaging 60,000 new cases per day for the week ended March 7. Deaths linked to COVID-19 fell 18% last week to 11,800, the lowest since late November and averaging 1,686 per day. (Open https://tmsnrt.rs/2WTOZDR in an external browser to see state-by-state details.) Despite the positive trends, health officials have warned ...

One of the people arrested for the fatal January 6th insurrection at the United States Capitol recently trained at a "Be a Guardsman" event in Montana.

Isaac Sturgeon of Dillon, Montana was arrested at JFK Airport on Saturday after being deported from Kenya. Among the allegations against him, according to the criminal complaint, is that he "and a group of others picked up a metal police barricade and shoved the barricade into" Metropolitan Police Department officers.