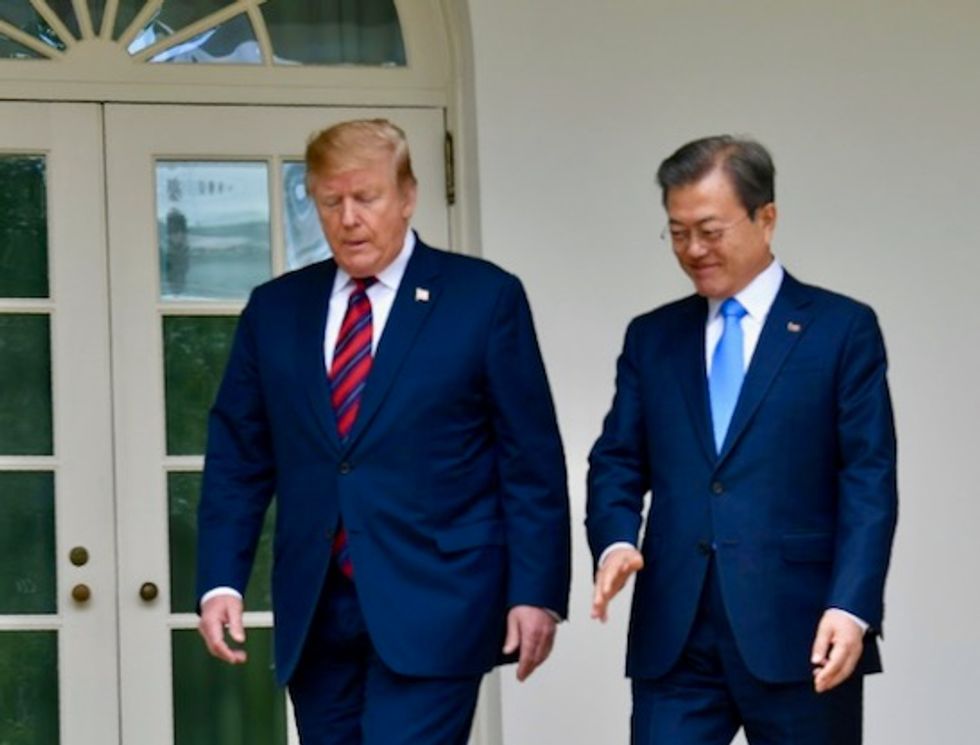 "We will be discussing that and potential meetings, further meetings with North Korea and Kim Jong Un," Trump said in the Oval Office at the start of talks with South Korean President Moon Jae-in.

A third summit would follow on Trump's historic breakthrough last year, when he met Kim in Singapore, and a follow-up this February in Hanoi that ended without progress in getting North Korea to give up nuclear weapons.

Both Trump and Moon are heavily invested in bringing North Korea out of the cold. But the unsuccessful summit in Vietnam was a setback for the two allies that has yet to be resolved.

At the White House, Trump insisted that a peaceful resolution of the North Korea standoff remains within reach, and that he continues to place considerable hope in his personal brand of diplomacy.

"I enjoy the summits, I enjoy being with the chairman," he said.

Kim is "a person I've gotten to know very well, and respect and hopefully, and I really believe over a period of time, a lot of tremendous things will happen. I think North Korea has a tremendous potential," Trump said.

The Vietnam summit ended without Trump being able to extract major concessions from Kim on the country's nuclear arsenal or Kim getting the reduction he wanted in heavy economic sanctions brought to pressure him into cooperating.

"We are discussing certain humanitarian things right now. I'm OK with that, to be honest," he said.

Although the broader sanctions should "remain in place," he said he opposes any further tightening and noted that he had stopped planned new measures.

There was "the option of significantly increasing them..., but I didn't want to do that," he said.

Trump has emerged as an unlikely peacemaker in the Korean peninsula, reversing his initially bellicose approach with a determined effort to put Washington and Pyongyang on a historic path to reconciliation.

But the Hanoi meeting was a letdown. The two leaders cut their talks short, skipping a scheduled final lunch and the expected issuing of a joint statement.

In Washington, that outcome brought Trump praise from Republican legislators who'd worried he would give too much away in pursuit of big headlines.

Trump continues to face criticism that he is out of his depth in talks with Kim, and that sitting down with the dictator has yet to bring much benefit.

But he insists that while he retains an unusually good personal relationship with Kim, he will maintain a tough negotiating line.

"Sometimes, you have to walk," Trump said, slipping into his real estate dealer's lingo, after the Hanoi meeting.

For Moon, the aftermath has been even more complicated.

In his talks with Trump, he insisted that the summits have produced important results, especially "the dramatic, significant reduction of military tension on the Korean peninsula."

"In this sense, I believe that the Hanoi summit is not actually -- was not a source of disappointment, but it is actually the part of a bigger process that will lead us to a bigger agreement."

But Moon has staked his presidency on concrete engagement with isolated North Korea, pushing for a resumption of South Korean tourism to the North's Mount Kumgang and operations at the Kaesong Industrial Complex, where companies from the South used to be staffed by workers from the North.

Plans to unveil details of such projects on March 1, right after the Hanoi summit, had to be shelved and he is under pressure from opponents on the right. One lawmaker branded him the North Korean's "top spokesman."

Kim himself has used the impasse to speak out against international sanctions and warn in colorful, defiant terms that his country will not bow to pressure.

The state-led economy will "deal a telling blow to the hostile forces who go with bloodshot eyes miscalculating that sanctions can bring the DPRK to its knees," a state media report quoted him as saying on Thursday, using the acronym for the North's official name.

Shortly after the Hanoi summit, a series of satellite images emerged suggesting increased activity at the North's Sohae rocket site, triggering international alarm that the nuclear-armed state might be preparing a long-range or space launch.