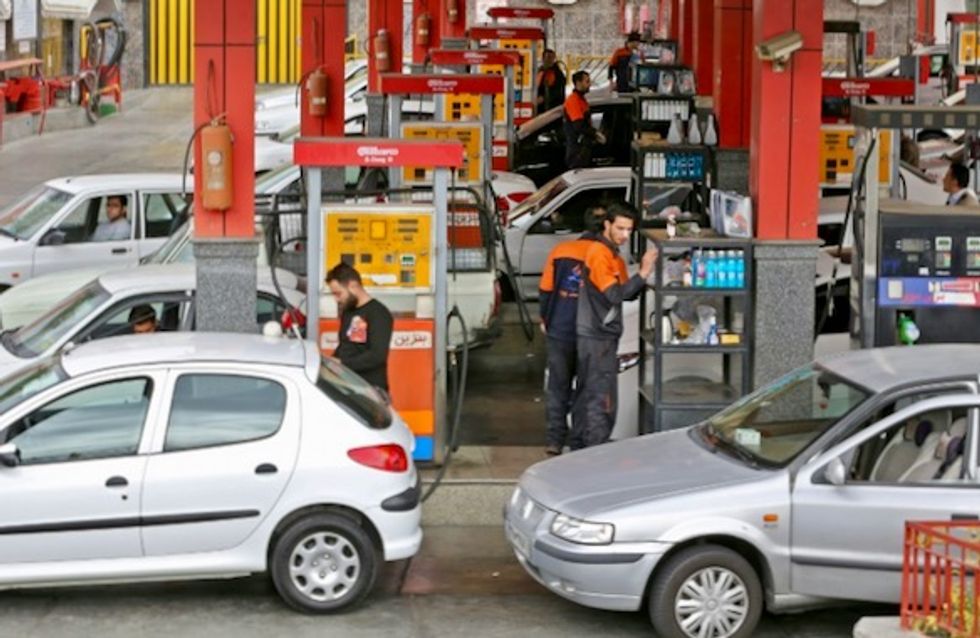 The United States said Monday it would start imposing sanctions on friends such as India that buy Iranian oil, in its latest aggressive step to counter Tehran that could jeopardize US relationships.

The announcement sent global crude prices spiraling higher, although President Donald Trump tweeted that Saudi Arabia and other US allies would "more than make up" for decreases in Iranian oil.

In seeking to reduce Iran's oil exports to zero, the Trump administration is targeting the country's top revenue maker in its latest no-holds-barred move to scale back the clerical regime's influence.

"The Trump administration and our allies are determined to sustain and expand the maximum economic pressure campaign against Iran to end the regime's destabilizing activity threatening the United States, our partners and allies and security in the Middle East," the White House said in announcing its move.

Eight governments were initially given six-month reprieves from the unilateral sanctions imposed last year by the United States on Iran.

They include India, which has warm ties with Washington but disagrees on the US insistence that Iran is a threat.

Other countries that will be affected include China and Turkey, opening up new friction in contentious relationships if the United States goes ahead with sanctions over buying Iranian oil.

Secretary of State Mike Pompeo insisted that the United States would punish countries that buy Iranian oil after May 2, without spelling out the scope of the sanctions.

"We've made clear -- if you don't abide by this, there will be sanctions," Pompeo told reporters. "We intend to enforce the sanctions."

The others -- Greece, Italy, Japan, South Korea and Taiwan -- have already heavily reduced their purchases from Iran.

Trump last year withdrew the United States from an accord negotiated by his predecessor, Barack Obama, under which Iran drastically reduced its nuclear program in return for promises of sanctions relief.

Pompeo said the United States would keep raising pressure until Iranian leaders come back to the table, although he appeared little concerned with wooing them, saying he was making his demands to "the ayatollah and his cronies."

Trump's tough Iran policy has already alienated close allies, with the Europeans supporting the 2015 accord -- with which UN inspectors say Iran is complying -- and setting up a way for their businesses to evade US sanctions.

A key backer of Trump's push is Israeli Prime Minister Benjamin Netanyahu, who hailed the latest move as "of great importance."

Just two weeks ago, Trump took another key step by designating Iran's elite Revolutionary Guards -- who are in charge of preserving the regime and have amassed vast commercial interests -- as a terrorist group, the first time such action has been taken against part of another government.

Iran earned $52.7 billion from petroleum exports in 2017, according to the oil cartel OPEC, before the reimposition of US sanctions.

Experts say it is unlikely that Iranian exports will ever be reduced completely to zero, with a black market likely to exist.

AFP/File / SAM PANTHAKY A cyclist passes a refinery of Essar Oil in Vadinar in western India, which is looking for ways to meet growing energy needs

Oil prices jumped overnight on reports of the action by the United States.

US benchmark West Texas Intermediate for May delivery went up another 2.2 percent shortly after opening to $65.39 a barrel.

Energy-hungry India stands to be among the most affected by the decision and is also facing US pressure not to buy from Venezuela, where Trump is seeking to topple leftist President Nicolas Maduro.

According to Indian commerce ministry data, oil imports from Iran in the 10 months to January rose 16.3 percent to 21.3 million tonnes -- although they have declined since the initial US sanctions announcement.

Trump's move has also been good for US business, with India's oil purchases from the United States skyrocketing 350 percent from 2017 to 2018.

In the case of Turkey, Ibrahim Kalin, the spokesman for President Recep Tayyip Erdogan, recently told reporters in Washington that "we are expecting" a waiver extension as the country had reduced imports from Iran, despite disagreeing with US policy.

The United States still has an exemption in place for Iraq, which relies on electricity from its neighbor to cope with chronic blackouts that have triggered unrest.