Turning Point USA’s national Twitter account shared an image of its members last night posing for a photo with TPUSA signage, captioned “Patriots In Action!” One person in the image is holding a yellow beach ball with the words “Google ‘Kalergi Plan’” written on its surface in permanent marker. So, we did a little dig to explore just what might the beach-ball holder be saying.

Searching the phrase into Google pulls up a trove of anti-Semitic and white nationalist conspiracy theories published by ideologically aligned outlets like Red Ice, Occidental Dissent, and blogs with names like “The Goy Knows.” 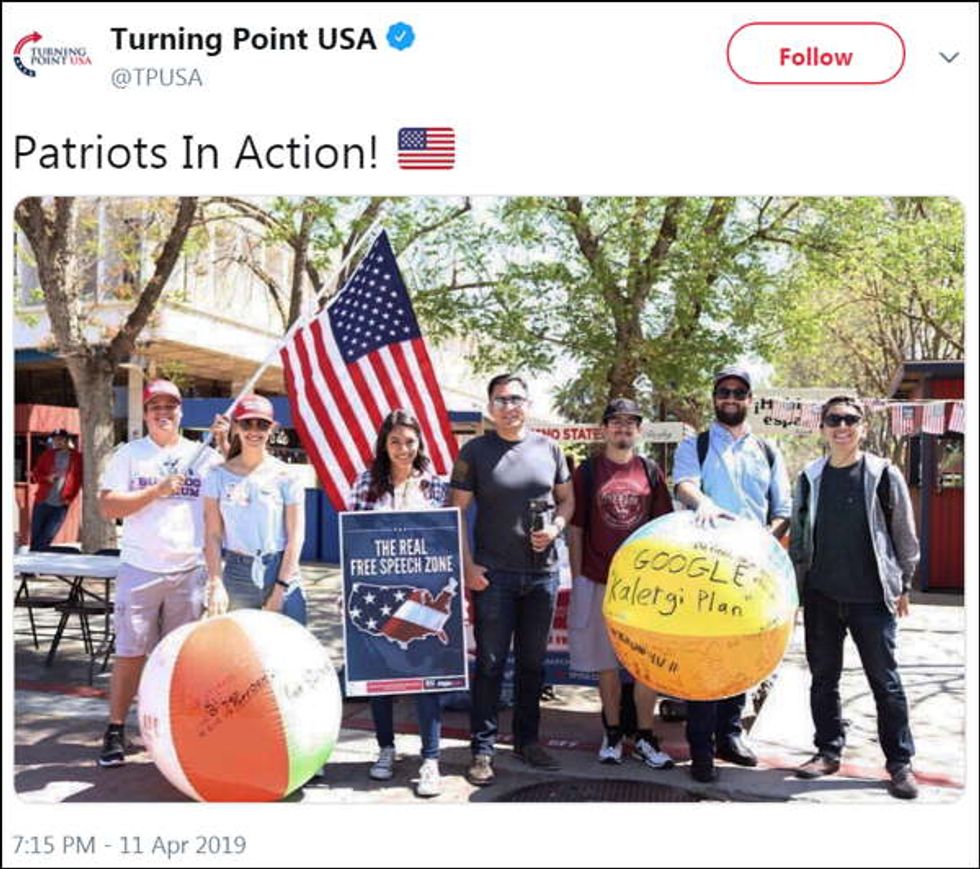 The Kalergi Plan is an anti-Semitic and white nationalist conspiracy theory revolving around the philosophy and political organizing of Richard von Coudenhove-Kalergi, an early 1900s Austrian politician who founded and presided over the Paneuropean Union. Some credit Kalergi for inspiring the later formation of the European Union. Kalergi favored European political integration and was supportive of racial integration in society, viewing it as inevitable, which made him a ripe target for white nationalist ire.

“The man of the future will be of mixed race. Today’s races and classes will gradually disappear owing to the vanishing of space, time, and prejudice,” Kalergi wrote in his 1925 book “Practical Idealism.”

Racist and anti-Semitic conspiracy theorists to this day believe that this outlook made Kalergi a political architect responsible for a plan to systematically destroy the white race in Europe through mass immigration. They also allege that Kalergi wanted his envisioned society to be ruled by Jewish elites. Kalergi’s purported vision, according to extremists, was the destruction of Europe and they say his plan is being implemented today.

These conspiracy theories have their roots in the “white genocide” and “great replacement” conspiracy rhetoric in far-right circles, which allege that a secret ruling class of Jewish elites is using immigration policy to remove European white people from the population. In an article about Kalergi on Red Ice, an author writes, “in the present, demographic engineering characterized by unfettered immigration is used as a weapon by state and non-state liberals, leftists, Jewish groups, Islamists, and Third Worldists to displace ethnic European populations.” Many far-right media operations and extremists echo these claims to this day and use them to urge their audience to engage in politics and violent acts in hopes of “saving” the white race.

This is hardly TPUSA’s first brush with right-wing extremism. The Southern Poverty Law Center reported in 2018 that Turning Point USA has been plagued with exposure of its members’ expression of racist sentiments and connection to figures who promote such views. The Anti-Defamation League reports that right-wing extremists’ attitudes toward TPUSA have “been varied, but generally positive.” Jane Mayer at The New Yorker wrote in 2017 that TPUSA had been “alleged to have fostered an atmosphere that is hostile to minorities.”