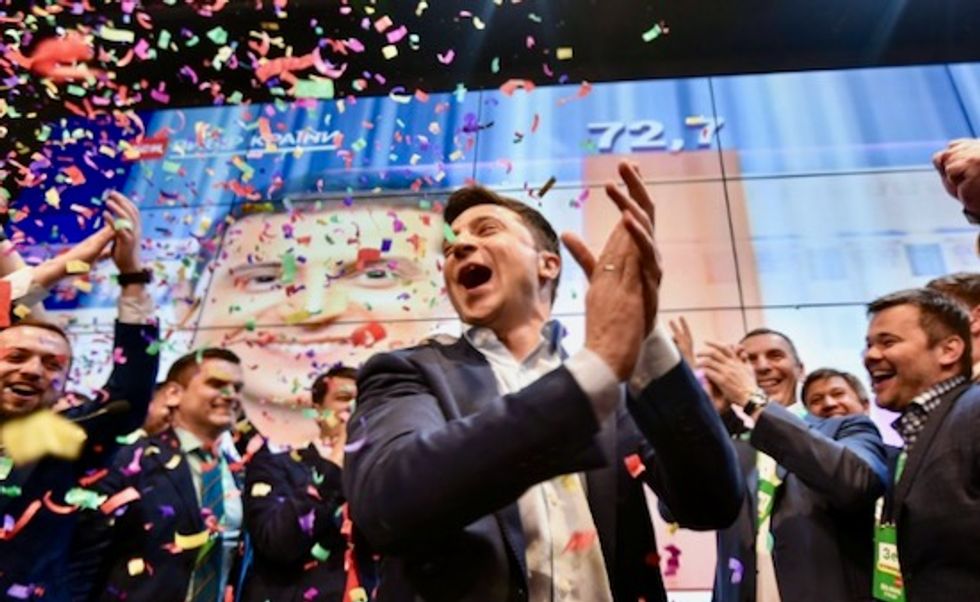 Ukraine leapt into the unknown Monday after comedian Volodymyr Zelensky was elected president on promises of change but with just a vague blueprint of what he might do as leader.

Zelensky, whose previous political experience was playing the president on a TV show, crushed incumbent Petro Poroshenko in a stinging rebuke to the establishment fuelled by voters' anger over war with separatists and social injustice.

Ukrainians looked to the future with hope and anxiety after the performer took 73 percent of the vote on Sunday, according to nearly complete official results.

Zelensky at 41 will become Ukraine's youngest ever president when he is sworn into office by early June. It remained unclear Monday who would fill top positions in his governement, including prime minister.

The star of "Servant of the People", a sitcom now in its third season, has vowed to press ahead with the pro-European course set out by Poroshenko.

But he has also said he wants to improve ties with arch-enemy Russia.

On election night, however, he appeared to taunt the Kremlin when he told people in fellow post-Soviet countries that "everything is possible."

Kremlin spokesman Dmitry Peskov said Monday it was "too early to talk about President Putin congratulating Mr Zelensky, or about the possibility of working together."

Ties between Ukraine and Russia were shredded after a bloody uprising ousted a Kremlin-backed regime in 2014, prompting Moscow to annex Crimea and support insurgents in eastern Ukraine in a conflict that has claimed around 13,000 lives.

Poroshenko, 53, quickly conceded defeat and said he was ready to coach the successor.

But on Monday evening he told a rally he planned to take back the country's top job during the next presidential polls set for 2024.

Several thousand supporters, who gathered outside the presidential offices, chanted they wanted him back "in a year".

"We will unite to secure our common victory in the near future.".

Poroshenko's faction has the most seats in the legislature and new parliamentary polls are due to be held in October.

The Ukrainian president has strong powers over defence, security and foreign policy but will need parliament backing to push through reforms.

On the streets of Kiev earlier Monday, many praised the elections as a fair and peaceful transfer of power after popular uprisings of 2004 and 2014.

"We had the most honest polls in the history of Ukraine," she added.

Zelensky shunned traditional campaign rallies, instead performing comedy gigs, and implied he would use the same unorthodox style to run the country of 45 million that depends on international aid.

G7 ambassadors said they looked forward to working closely with the new leader but also recognized the progress the country had made under Poroshenko since 2014.

OSCE observers praised Ukraine's election as "competitive and held with respect for fundamental freedoms", while regretting that the campaigns were thin on substance.

The Kremlin said it respected the choice of the people but questioned the legitimacy of the polls, noting that "three million" Ukrainian citizens living in Russia could not vote there.

Kiev refused to open polling stations at its diplomatic missions in Russia.

Zelensky has said that among his top priorities are securing the release of Ukrainians being held prisoner by Russia and rebooting moribund Western-brokered peace talks.

But many doubt the political neophyte will be able to stand up to Putin and revive the struggling economy.

Questions have also been raised over his close ties to Israel-based tycoon Igor Kolomoysky.

AFP / Sergei SUPINSKY Zelensky's campaign started as a joke but struck a chord with voters frustrated by social injustice, corruption and a war with Russian-backed separatists in eastern Ukraine

Victoriya, a 74-year-old pensioner, said she liked the new president-elect but expressed concern that he may not last long.

"He has not met this pack of wolves yet," she said.

Ukrainians want to see a quick end to the war in the east and pay less for utility bills, Fesenko told AFP.

"It will be extremely difficult to meet these expectations," he said.