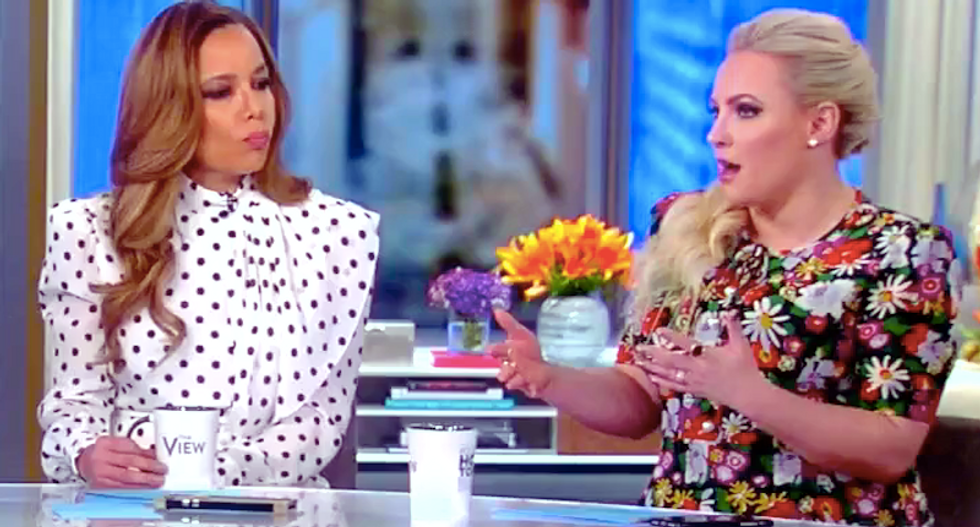 The California Democrat clashed Tuesday with Treasury Secretary Steve Mnuchin, who moped and griped through a House Financial Services Committee meeting and threatened not to return and face the Democratic majority again.

"I'm not a fan of Mnuchin," Huntsman insisted. "(But) she said recently if you see anybody from the Trump Cabinet out you get out and create a crowd, you push back and say they're not welcome anymore anywhere. How does that bring us together? If you see (Gen. James) Mattis at a table and say you get out? A man who served our country."

Co-host Meghan McCain agreed with Huntsman that Waters set a poor example by reacting angrily to Mnuchin challenging her congressional authority, and she said the clash would only widen the political divide.

"It's a horrible place where we are in society," McCain said. "We try to hold ourselves to a different standard than President Trump. I understand your anger, I share your anger about the way President Trump conducts himself. I don't agree with, if you see someone in a restaurant you should surround them -- it seems dangerous."

"There was a time that Ronald Reagan was shot and Tip O'Neill went to his bedside and prayed with him," she added. "I yearn for that time. I hope we can move past this, and this isn't the threshold that we've hit that there's no way to come back from."

Hostin said they both were missing the point -- and giving Mnuchin a pass for his rude behavior in the congressional hearing.

"We're talking about things that perhaps Maxine Waters said outside the meeting," Hostin said. "Let's talk about what happened in the hearing, which is Mnuchin being disrespectful in the meeting."