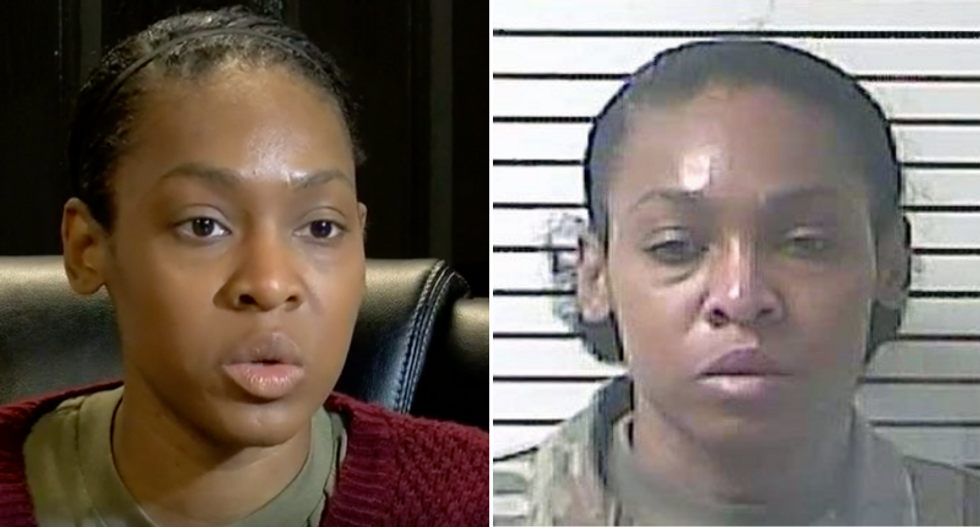 Fort Knox Army sergeant Kai Williams speaks to local news (left) after being arrested for a stabbing she said she did in self-defense (mugshot via HCDC).

A black Army sergeant said she stabbed a racist woman in self-defense — and that her ensuing felony assault arrest should be retracted because of it.

Louisville, Kentucky's WAVE 3 News reported that Kai Waters, a sergeant at Fort Knox, said she saw a woman driving erratically on the night of February 22, 2019 before the driver pulled up beside her and began honking.

The woman bumped the sergeant's car, prompting her to call 911 and pull into a busy gas station rather than driving home so there would be other people around for protection.

In surveillance video from the gas station, it's clear that the other driver came up to Waters' car before she'd even opened her door — and as the sergeant claimed, the woman began punching her as soon as she got out of the car and while she was still on the phone with the police.

"Waters said she grabbed a knife given to her as a military honor and jabbed the woman in the leg in self-defense," WAVE 3 reported. "After the woman was stabbed, she’s seen in the video continuing to go after Waters as the two appear to be going back and forth."

The sergeant said that once Elizabethtown Police arrived, however, the other woman began crying. Officers then detained Waters and would not, according to the sergeant, listen to her story.

“I thought hopefully, someone is going to listen to me, they’re going to get my story,” she said. “But that never happened.”

Waters' attorney Jeremy Aldridge said that he hopes once a grand jury sees the gas station surveillance video, they will have a "very difficult time indicting her based on the conduct that is provable by the video."

The sergeant told WAVE 3 that she filed a complaint against the other woman — but that Elizabethtown Police did not act on it.

Waters, meanwhile, is temporarily off the job at Fort Knox that she relocated to Tennessee for from New York in 2018. The base is nonetheless supporting her version of events.

"SFC Waters is a professional and was chosen from our entire field to come to Fort Knox and represent our Corps after an intense vetting process," Alicia Masson, a Fort Knox spokesperson, told WAVE 3. "She is a trusted leader and this turn of events is in total contradiction to her performance and character. I understand the police department has a job to do but now that the truth is seen by video that our Soldier was attacked, I hope there will be swift correction to this situation and her rights returned. I stand behind her and am anxious for justice."

You can watch the surveillance video below: