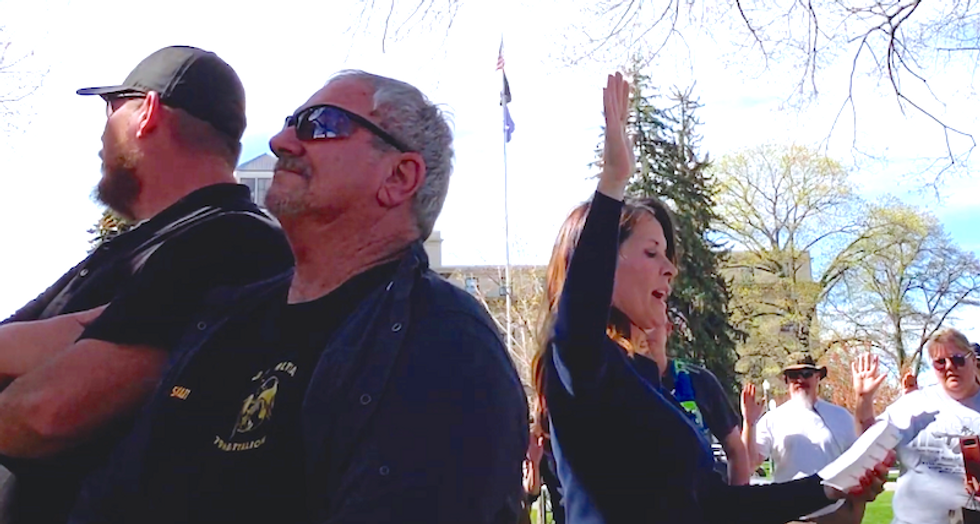 Idaho's Republican lieutenant governor was filmed leading a crowd in reciting a strange oath during a rally hosted by a pro-gun militia.

Idaho Falls' Post-Register newspaper reported that Lt. Gov. Janice McGeachin, who was for a few hours on Friday the state's acting governor while Gov. Brad Little was out of town, administered the oath to the crowd at a rally commemorating a Revolutionary War battle hosted by the Real III Percent of Idaho.

Lt. Gov. McGeachin asked the crowd to hold their right hands straight up and "solemnly swear that I will support and defend the Constitution of the United States against all enemies foreign and domestic."

In an editorial decrying McGeachin's "dangerous embrace of the militia movement," the editorial board of the Post-Register noted that the lieutenant governor gave the assembled crowd "an abridged form of the oath outlined in Idaho Code 46-202 — the oath given to members of the state militia, that is, to members of the Idaho National Guard."

"This time, she administered the oath to a group of armed men who argue the government has become tyrannical, an ideology that has sparked terrorism and violence," the editors wrote.

In a statement given to the newspaper, McGeachin staffer Jordan Watters explained that the lieutenant governor gave the National Guard oath to "attendees at the Patriots' Day celebration" who wanted to "express their support for and dedication to the U.S. Constitution."

“It was not delivered in a legal context and therefore holds no legal significance," the spokesperson added.

This wasn't the first time Idaho's lieutenant governor was filmed posing with members of the Three Percenters militia group that was infamously among the armed protesters at the deadly Unite the Right rally in Charlottesville, Virginia in 2017.

In February 2019, McGeachin posed with two members of the Three Percenters in front of her Idaho Statehouse office. The two men were wearing shirts in support of Todd C. Engel, an Idahoan serving a federal prison sentence for his role in Cliven Bundy's anti-government standoff.

Though she swiftly deleted the post, the lieutenant governor doubled down on her support of Engel and referred to the Three Percenters as "Second Amendment supporters."

"I took a photo with two Second Amendment supporters who were here to support Todd Engel, an Idahoan who was treated unjustly by the court system for standing up for our fundamental rights as Americans," McGeachin said. "They were part of a larger group who had come to the Capitol to protest Engel’s imprisonment."

Watch the lieutenant governor give the Three Percenters and fellow audience members the militia oath below: