WATCH: Pete Buttigieg says he’d like to see Pence ‘evolve’ on LGBT Rights – and not use religion ‘to harm people’ 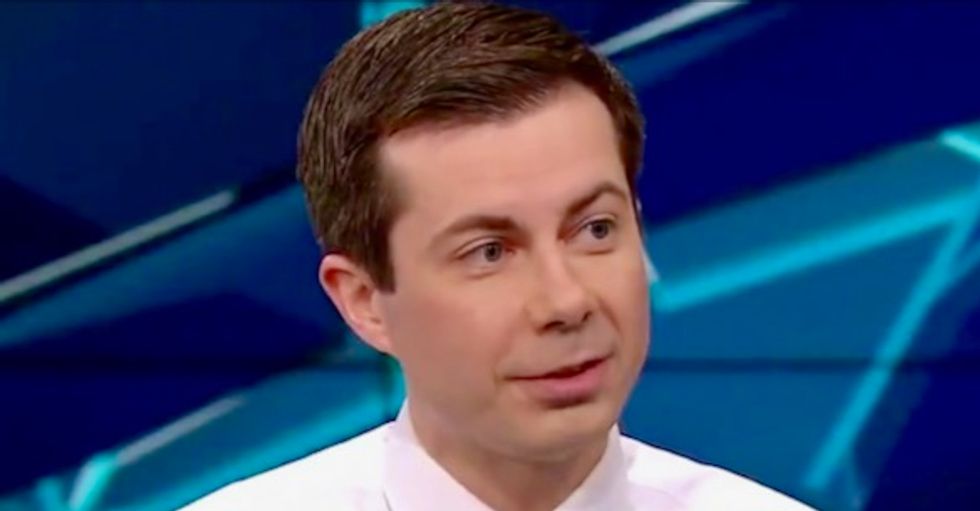 "My problem is when those religious beliefs are used as an excuse to harm other people,” Buttigieg charges.

The Vice President is "entitled to his religious beliefs," says Buttigieg, who has been mayor since 2012, which includes Pence's tenure as Governor of Indiana. "My problem is when those religious beliefs are used as an excuse to harm other people,” Buttigieg explained on CNN Tuesday (video below).

Buttigieg reminded viewers that Pence "advanced a discriminatory bill in 2015, under the guise of religious freedom, that said it was lawful to discriminate, provided you invoked religion as your excuse."

"This isn't about him as a human being," Buttigieg added, apparently pushing back against Pence's false claim that Buttigieg has attacked him personally.

Buttigieg charges that "to this day" the Vice President "hasn't brought himself to say that it shouldn't be legal to discriminate against people in this country because they're LGBT."

He notes that Pence "seems to be OK" with allowing LGBT people to be denied housing and services, and to be fired because they are LGBT.

"I would love to see him evolve on that issue," Buttigieg said, noting that it's "part of faith, that all of us can evolve and can grow better."

Buttigieg, who served in the U.S. Navy as a Lieutenant in Afghanistan, also accused Pence of being against "Don't Ask, Don't Tell" because "he felt it was too pro-gay. He wanted to make sure that even closeted members couldn't serve."

He also called on Vice President Pence to "clear up" his positions against LGBT equality and civil rights.