WATCH: Rachel Maddow and Pete Buttigieg have a powerful conversation about the struggle of being in the closet 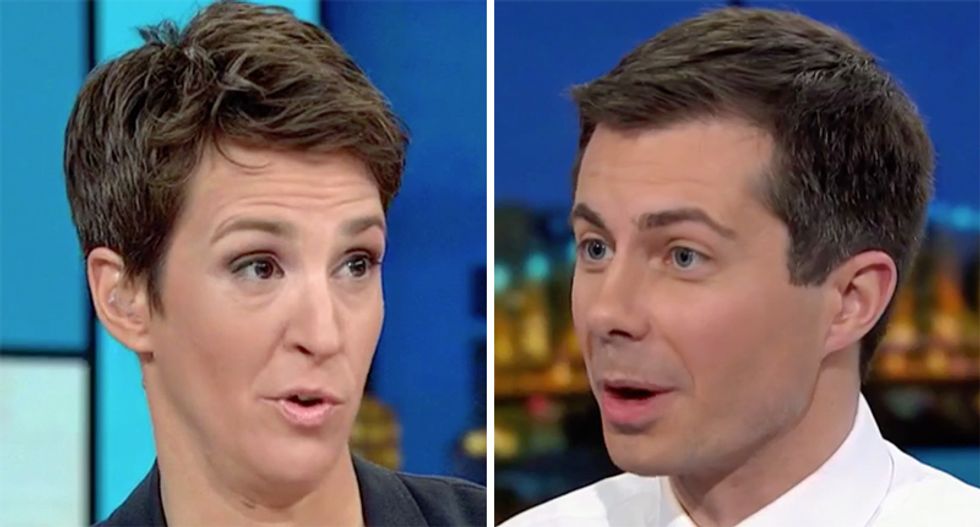 In an unprecedented moment for a presidential campaign, Mayor Pete Buttigieg and MSNBC host Rachel Maddow had a powerful personal discussion Monday night about the struggles and costs of living in the closet as a gay person.

Maddow prefaced the discussion noting that she had an “awkward question” to ask. But she noted that, like him, she had been a Rhodes scholar — in fact, she was the first openly gay Rhodes scholar ever. She pointed out, though, that he had become a Rhodes scholar, got a job in the private sector, worked on political campaigns, joined the military, and became mayor of South Bend, Indiana all before he ever came out as gay.

“I acknowledge that this is a difficult question, not because it’s bad you didn’t come out until you were 33, but I think it would have killed me to be closeted for that long,” she said. “I just wonder, if that was hurtful to you? If it hurt you to do it.”

“Yeah,” said Buttigieg. “It was hard, it was really hard.”

“Coming out is hard,” said Maddow. “But being in the closet is harder.”

“Yeah, no, that’s what I mean,” he replied. “I mean, it was and it wasn’t. First of all, it took me plenty of time to come out to myself. So I did not, the way you did or the way my husband did, figure out at such an early age — I probably should have! I mean, there were certainly plenty of indications by the time I was 15 or so that I could point back to and be like, ‘Yeah, yeah, this kid’s gay.’ But I guess I just really needed to not be.”

He continued: “And there’s this war that breaks out, I think, inside a lot of people, when they realize they might be something they’re afraid of. And it took me a very long time to resolve that.”

Jonathan Lemire, a reporter for the Associated Press, noted how novel the conversation was.

“The televised conversation between Rachel Maddow – one of the nation’s top cable hosts – and Pete Buttigieg – a top tier presidential candidate – about their experiences coming out as gay would have been unimaginable just a few years ago,” he said on Twitter.