Winter is over: HBO brings down curtain on TV phenom 'Game of Thrones' 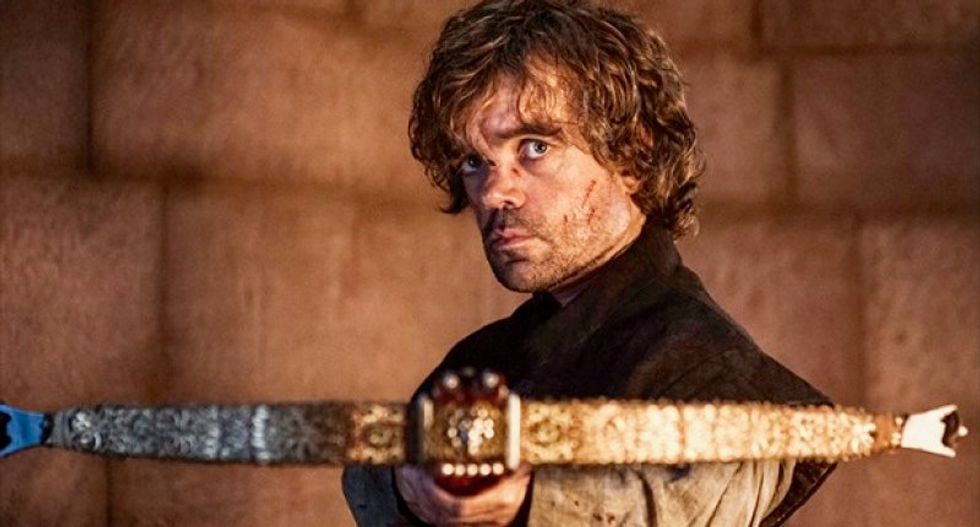 Who will win the battle for the Iron Throne? Millions will be perched on the edge of their own seats to find out as "Game of Thrones," set in a turbulent medieval fantasy world of dragons and sword fights, reveals its final political twists and action-packed turns.

Bets on the ultimate ruler of the fictional continent of Westeros are well underway, according to British bookmaker William Hill, with wilful, powerful Bran Stark (Isaac Hempstead-Wright) the current favorite.

Ten days ahead of the season eight premiere, more glamorous candidates such as King in the North Jon Snow (Kit Harington) and Mother of Dragons Daenerys Targaryen (Emilia Clarke) are also very much in the conversation.

AFP/File / STR George R.R. Martin, seen in 2016, is the author of "Game of Thrones" and the other books in the "A Song of Fire and Ice" series

In the 20 months since the last season aired, fans have debated non-stop the eventual ending of the unusually expansive, ambitious show, filmed at a cost of $15 million an episode.

The first of the new season's six episodes will air on US cable channel HBO on April 14, as well as on the network's streaming platforms.

Lauren Christison, a supply manager in her 30s who lives and works in New Jersey, said she was "beyond eager" to see what unfolds, and plans to watch with her sister, who turned her on to the program.

"I am so excited that I went out and purchased the limited edition white Johnnie Walker scotch whisky -- and I don't even drink whisky," she told AFP.

"Game of Thrones," which has aired 67 episodes, premiered in 2011 based on George R.R. Martin's expansive "A Song of Fire and Ice" book series. The first installment, "A Game of Thrones," was published in 1996.

Well known for its record-breaking audiences across the world, the show has also proven a critical darling and an awards juggernaut, its first seven seasons garnering a staggering 47 Emmys.

"I think there may have been other shows in the past that hooked people, but never like this," Christison said.

The website Archive of Our Own counts more than 22,000 "fan fiction" entries in which devotees have produced DIY stories based on the series's universe.

The 2018 "Con of Thrones" fan convention attracted around 5,000 people to celebrate the show in Nashville, according to organizer Melissa Anelli of Mischief Management, which plans to repeat the event in July.

"The level of engagement is enormous," Anelli said.

Dark, complex, violent, medieval -- "Game of Thrones" doesn't fit the typical profile of a cultural phenomenon, but its sweeping storylines and epic themes have pulling power beyond the geek clique.

The show builds on the witty, wry and sometimes adult approach to nerd culture popularized by Disney's Marvel Cinematic Universe, which treats its audience like grown-ups and has been rewarded with $18.5 billion in ticket sales.

"The Marvel movie franchise really made nerd mainstream," said "GoT" buff Senia Hardwick, who revealed that she met her wife at a fan gathering.

For Christison, the universality of its appeal is obvious.

"In the end, I think 'GoT' resonates with people because the themes of power, love, family, and conviction are woven into each of the characters as they vie for the Throne," she said.

"The story arc is so vast that it can appeal to a variety of viewers at once," added Lisa Woolfork, a literature professor at the University of Virginia who teaches a "Game of Thrones" class.

"Those interested in political intrigue, family drama, historical fiction, sword and sorcery, costume drama -- all of these representational styles are present in 'Game of Thrones.'"

AFP/File / Bill Wechter A "Game of Thrones" fan dressed as the Night King, leader of the White Walker frozen zombie army in the show, attends the 2017 Comic Con in California

Despite being fantasy, the series does an incredible job of commenting on the modern world, according to Valerie Garver, a medieval studies associate professor at Northern Illinois University.

She cited the show's iconic tagline -- "Winter is coming" -- an ominous warning about the harsh weather ahead, but perhaps also a portent of the end of the world -- and an allegorical nod to the real-life climate change emergency, Martin has acknowledged.

The motif returns in the upcoming season, with characters facing threats from the sinister Night King and his army of frozen zombies -- the frankly terrifying White Walkers.

"What do people do when there seems to be an unsolvable problem that could mean the destruction of humankind?" Garver asked. "Will they try to solve that or will they pay attention more to the things that seem more immediate?"

Though some fans are pulling for another season or two, most seem to have accepted the impending conclusion and, like Christison, are "ready for the shock of who will live and ultimately who will die."

AFP / Angela Weiss A giant Iron Throne is on display ahead of the "Game of Thrones" eighth and final season at Radio City Music Hall on April 3, 2019 in New York

For Anelli, the passion of "GoT" will live on past its final episode, airing on May 19.

The publication of Martin's much-anticipated sixth "A Song of Fire and Ice" book ought to ignite fans' devotion all over again, as has the teased possibility of a prequel series, set before Martin's first book.

Anelli says a 2020 "Con of Thrones" gathering isn't yet planned, but added that "much like Harry Potter, 'Game of Thrones' fandom will continue to exist past the core content expiration."