'A con and a fraud': CNN's Don Lemon reads from 'Art of the Deal' to explain Trump's tax grift 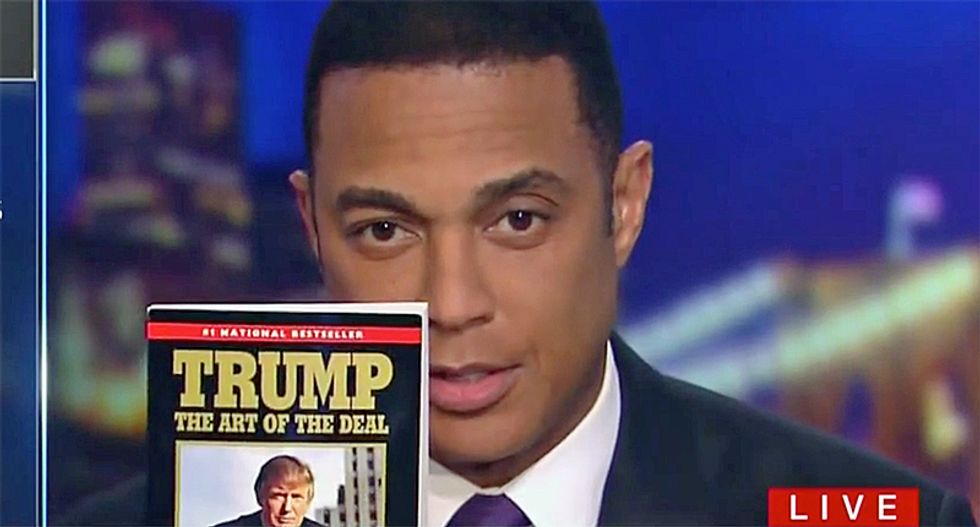 Anchor Don Lemon holding up a copy of 'Trump: The Art of the Deal' on CNN (screengrab)

CNN's Don Lemon read from the bestselling 1987 book Trump: The Art of the Deal to bolster his contention that President Donald Trump is "the conman-in-chief."

"So, everyone, have a seat," Lemon instructed. "Are you listening? The president of the United States is a fraud and a conman."

"And the fraud and the con is on us, the American people," he explained.

"Now we know why the president wants to keep his tax returns hidden and it’s not because he’s under audit," he noted. "The man who ran for president on his reputation as a billionaire business genius was a really, really, really lousy businessman. Literally the worst businessman in the country. I’m speaking the truth here. Read The New York Times report."

Lemon noted that Trump was documented to be a lousy businessman in the years leading up to the publishing of the book Trump: The Art of the Deal.

"The book that Donald Trump claimed to have written even though we know he actually didn’t actually write this, journalist Tony Schwartz did, he's told us that before," Lemon noted. "The book that was supposed to reveal all the secrets to his business success."

Lemon then read from the book, beginning on page fifty-eight. He told viewers to read along if they had a copy.

"The final key to the way I promote is bravado. I play to people’s fantasies. People may not think big themselves but they can get very excited by those who do. That’s why a little hyperbole never hurts. People want to believe that something is the biggest and the greatest and the most spectacular," he quoted.

"He may call it truthful hyperbole, I call it a con and a fraud, with the evidence to back it up," Lemon said.

He then read from page sixty.

"You can’t con people, at least not for long. You can create excitement, you can do wonderful promotion and get all kinds of press, and you can throw in a little hyperbole. But if you don’t deliver the goods, people will eventually catch on," he quoted.

Lemon then paused, before asking, "is that a self-fulfilling prophecy?"

Lemon noted The Times reported they received the documents from somebody who had legal access.

“So that means somebody out there knows a whole lot about the president’s taxes -- and now they’re talking," Lemon noted.

"Just imagine what else is out there. Imagine what is in the returns he’s still fighting to keep under wraps," he suggested. "Imagine what the conman-in-chief is thinking right now."