'A long ride': 50 years ago, a dress rehearsal for the Moon landing 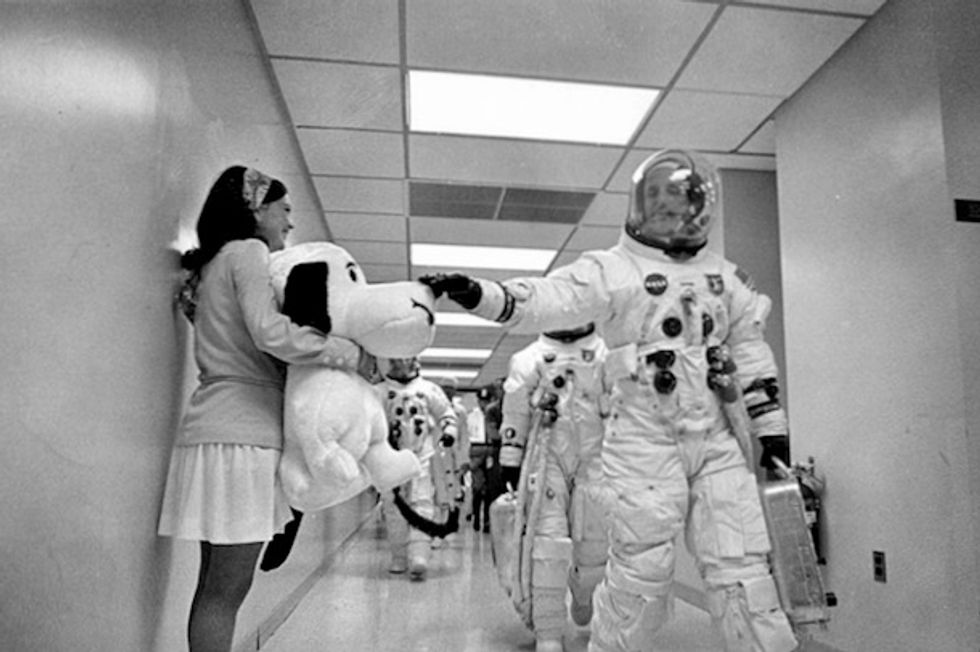 The Apollo 10 mission became synonymous with Snoopy and Charlie Brown in the minds of the public, because the three-man crew named their lunar module and command module after the iconic cartoon characters NASA/AFP / Handout

As Earth grew ever smaller below his spacecraft, Apollo 10 commander Tom Stafford made an unusual request to mission control.

The year was 1969, and his vessel was the first to be equipped with a color camera, which was beaming live images to an awestruck global audience.

"I was feeling real high," recalled Stafford, who is now 88 and the last surviving member of the crew.

"I said: 'Think you could call over to London and tell the president of the Flat Earth Society that he's wrong?'"

It was a light moment during a mission of paramount importance: 50 years ago this week, Apollo 10 set off to finalize the preparations for Apollo 11's lunar landing.

AFP/File / JIM WATSON On the return journey from the Moon, Tom Stafford and the Apollo 10 crew achieved a speed of Mach 37 (about 25,000 mph)  as they entered Earth's atmosphere -- a record which still stands

The mission's objectives included an eight-hour orbit in a lunar module that Stafford flew down to within nine miles (14 kilometers) of the Moon's surface.

Apollo 10 paved the way for Neil Armstrong's "giant leap for mankind" two months later -- a historic milestone and a colossal geopolitical win for the United States at the height of the Cold War.

But Stafford, a US Air Force test pilot who was among the first astronauts recruited for the newly formed National Aeronautics and Space Administration (NASA), almost wasn't part of the mission, after a close call a few years earlier.

The US entered the space race well behind the Soviet Union, which put the first artificial satellite, Sputnik 1, into orbit in 1957, and sent up the first human, Yuri Gagarin, four years later.

NASA/AFP / HO In this May 22, 1969, image obtained from NASA, the Apollo 10 command module is seen from the lunar module (LM) after separation in lunar orbit

To catch up, the Gemini program was conceived to devise rendezvous and docking techniques for an eventual mission to the Moon.

"As a boy I'd read about Buck Rogers, Flash Gordon -- you'd see these spaceships flying together. Nobody had ever done it," Stafford said at a Washington event commemorating the anniversary.

The Oklahoma native was chosen for the two-man Gemini 6A mission, which could have ended in tragedy had it not been for the quick thinking of Commander Wally Schirra.

Seconds before lift-off on December 12, 1965, they realized the engines of their Titan II rocket had cut out.

Mission rules dictated that Schirra should pull a cord and eject them because if the rocket had taken off with partial thrust, it would likely fall back to its launch pad, causing a catastrophic explosion.

But realizing from previous experience that they had not in fact taken off, Schirra decided to wait.

Stafford said it was a decision that probably saved their lives as the cabin had been soaking in pure oxygen for hours.

"We were at 100 percent oxygen, we could have been like two Roman candles going out!" he told AFP.

The mission launched three days later and met its objectives.

NASA/AFP/File / Handout This NASA image shows the Earth as seen from Apollo 8 as it entered lunar orbit on December 24, 1968

It became synonymous with Snoopy and Charlie Brown in the minds of the public, because the three-man crew named their lunar and command modules after the iconic cartoon characters.

"NASA developed a relationship with Charles Schulz, who drew Peanuts," he explained.

The names were said to have caused some consternation among NASA management, which felt they lacked sufficient gravitas -- accordingly, "Eagle" and "Columbia" were chosen for Apollo 11.

The Apollo 10 crew could have been chosen to land on the Moon, but for the fact that NASA had not shaved enough weight off their lander at the time, added Stafford.

Of course, they couldn't actually see it until they were upon it, because it was eclipsed by the Earth on their trajectory.

NASA/AFP / Handout In this May 1969 image obtained from NASA, astronaut Tom Stafford, wearing his spacesuit, is being shown a pennant bearing the Peanuts comic book character Snoopy at the Kennedy Space Center in Florida

"Kind of a buggy feeling -- you're going somewhere you couldn't see," he said with a laugh.

The mission itself was notable for the lunar module's unexpected rolls in its descent stage -- the crew was heard muttering expletives on US television broadcasts.

But they regained control and scoped out the landing site for Apollo 11 on the Sea of Tranquility.

On whether he ever experienced fear during the mission, Stafford said: "No, I was a fighter pilot, a test pilot -- I was used to risk."

But, as their ship set out, he recalls thinking: "Here was the Earth, it was shrinking away.

Stafford says that he remains struck to this day by the sheer size of the boulders they witnessed in some of the Moon's craters, which he compared to modern-day stadiums like the Superdome in New Orleans.

AFP / -Tom Stafford, 88, is the last surviving member of the Apollo 10 crew

On the return journey, the Apollo 10 crew achieved a speed of Mach 37 (about 25,000 miles per hour) as they entered Earth's atmosphere -- a record which still stands.

Stafford's advice for missions returning to the Moon and heading for Mars are two-fold.

"Number one: keep things as simple as possible" as complexity magnifies the risk, he said.

Secondly, he suggested involving astronauts with the development from the get-go, as was done with the Gemini and Apollo programs -- "not somebody saying, 'Here's a spacecraft, go fly it.' It doesn't work that way."

While the technology involved may have come a long way -- Stafford recalls the Gemini guidance computer designed by IBM carried a total memory of 4,096 words -- other things, like science-deniers, remain familiar.

The day after Stafford made his cheeky request to contact the British Flat Earth Society, he received news from mission control that the group had responded.

They were reading out the day's news items, and told him: "The president of the British Flat Earth society said he appreciated the beautiful color TV images, and yes, the Earth is round but it's a flat disc."