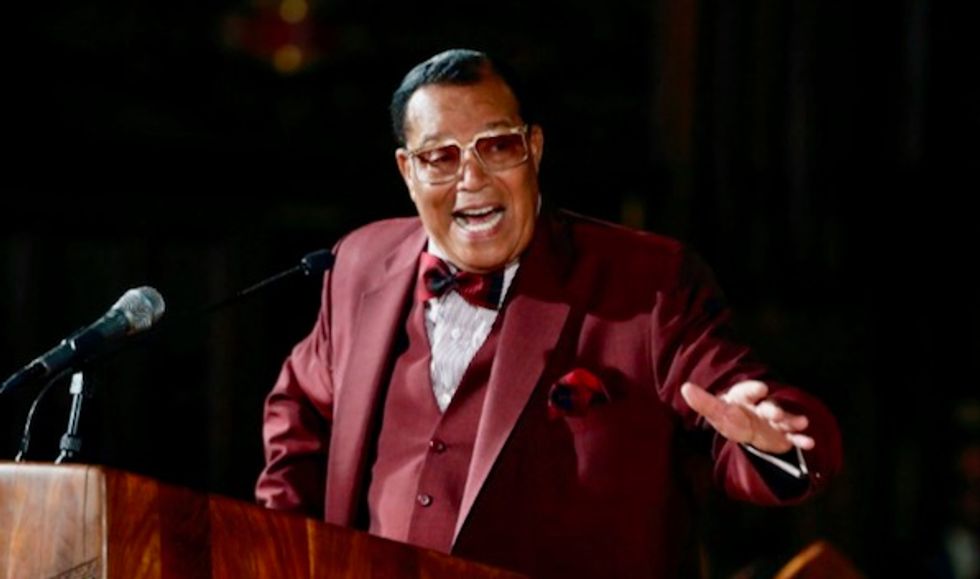 Nation of Islam leader Louis Farrakhan speaks about his ousting from Facebook at St. Sabina Catholic Church in Chicago, Illinois on May 9, 2019 AFP / KAMIL KRZACZYNSKI

Racist demagogue and dangerous fundamentalist to some, heroic crusader for black rights to others, incendiary religious leader Louis Farrakhan is finding the audience for his message increasingly hard to reach.

The head of the Nation of Islam -- barred for years from Britain and blocked from mainstream TV -- has been declared an undesirable by Facebook for his long record as an unrepentant merchant of anti-Semitism and homophobia.

Farrakhan's black advocacy and mantra of self-reliance has lent him a measure of legitimacy over the years, bolstered by his role a quarter century ago in organizing the Million Man March that drew hundreds of thousands of African Americans to Washington.

And while his continuing influence is undeniable, critics of the 86-year-old son of a Massachusetts seamstress point out that he has compared Jews to "termites," called Hitler a "great man" and claimed that the white race was created by an evil wizard.

True to form, one of the most divisive political figures in modern American history reacted to his May 2 ouster from Facebook by casting himself as a victim silenced by powerful forces.

"What have I done that you would hate me like that?" Farrakhan asked before an audience of more than 1,000 at Saint Sabina Church in Chicago on Thursday.

Cheered on by the rapt congregation -- many of whom were members of the Nation of Islam -- he denied misogyny, homophobia and racism, telling the crowd: "I do not hate Jewish people. No one who is with me has ever committed a crime against the Jewish people."

Farrakhan's supporters say his words have been twisted.

"If they actually heard what he had to say and not listen to a soundbite it would be very helpful," said Enoch Muhammad, 40, a member of the Nation of Islam and founder of the community group Hip Hop Detoxx.

What hasn't been taken out of context is Farrakhan's claim that Jews played a key role in the slave trade and have systematically oppressed black people in the US.

On Thursday night, he once again uttered the kind of statements that have gotten him in trouble, criticizing the influence of Jewish scriptural thinking on the Catholic Church.

"It's this that they fear," he said, pointing to his mouth. "I don't have no army. I just know the truth. And I'm here to separate the good Jews from the Satanic Jews."

In recent decades, his star has faded, but the current era of increasingly high-profile hate crimes may have finally caught up with Farrakhan.

Last month, a teenage gunman who wrote a hate-filled manifesto online opened fire at a synagogue in Poway, California, killing a worshiper.

"Farrakhan may be the most popular anti-Semite in the United States," said Oren Segal of the Anti-Defamation League, describing his group as Farrakhan's "biggest foil."

"He often gets a pass for his vitriol, because of the way he's tried to present his standing within the community," Segal said.

Born in 1930s New York as Louis Eugene Walcott, and brought up in Boston's fundamentalist Christian tradition, Farrakhan has been credited for bringing hope to African American communities.

His followers have stood guard in neighborhoods against gang violence and ministered to convicts in prison who are disproportionately African American.

And while former president Bill Clinton may have been criticized for sitting alongside Farrakhan at the televised funeral of Aretha Franklin last year, many younger Americans have no qualms about being associated with the preacher.

As recently as April, he commanded a crowd while giving a speech in Los Angeles on the spot where popular rapper Nipsey Hussle was shot dead.

"The enemy wants to keep this killing of one another going," he told the rapt crowd.

"Because as long as we keep killing one another, he can maintain power in what we call the tyranny of white supremacy," he said.

"Show what he really be talking about -- educating the truth. Can't ban all of us," Snoop Dogg said.

Among Farrakhan's other supporters is Father Michael Pfleger -- the politically-active Chicago priest who invited Farrakhan to speak at his Saint Sabina church Thursday night.

The public show of support gave Farrakhan a boost and led to a public rebuke of the priest from the Illinois Holocaust Museum.

"Minister Farrakhan has been a bold voice against injustice done against black people in this country and his voice deserves and needs to be heard," Pfleger said.