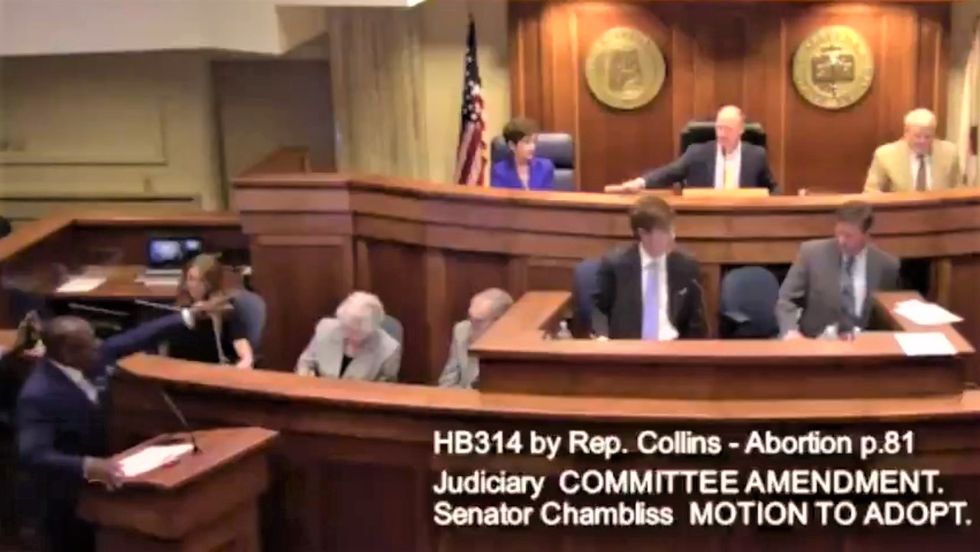 State senators in Alabama angrily debate a bill that would make having an abortion punishable by 99 years in jail (Screen cap).

The Alabama State Senate erupted into chaos on Thursday after members of the Republican Party tried to jam through a bill that would have made having an abortion punishable by 99 years in prison -- without even allowing exceptions for cases of rape and incest.

AL.com reports that the Republican caucus in the Alabama Senate ignited a firestorm in the chamber when they removed an amendment in their anti-abortion bill that would have exempted women who had abortions after being raped from being punished by decades in prison.

This led to furious objections by Democratic lawmakers, who eventually succeeded in getting the Republicans to table the motion and push back a final vote on it until next week.

According to AL.com, Democratic senators led by Senate Minority Leader Bobby Singleton "strongly objected to Lt. Gov. Will Ainsworth, who presides over the Senate, for his quick gavel on tabling the rape and incest amendment on a voice vote, meaning there is no recorded vote."

The Alabama Senate has made its anti-abortion bill so punitive in the hopes of drawing a Supreme Court challenge that will lead to the overturn of Roe-v-Wade.