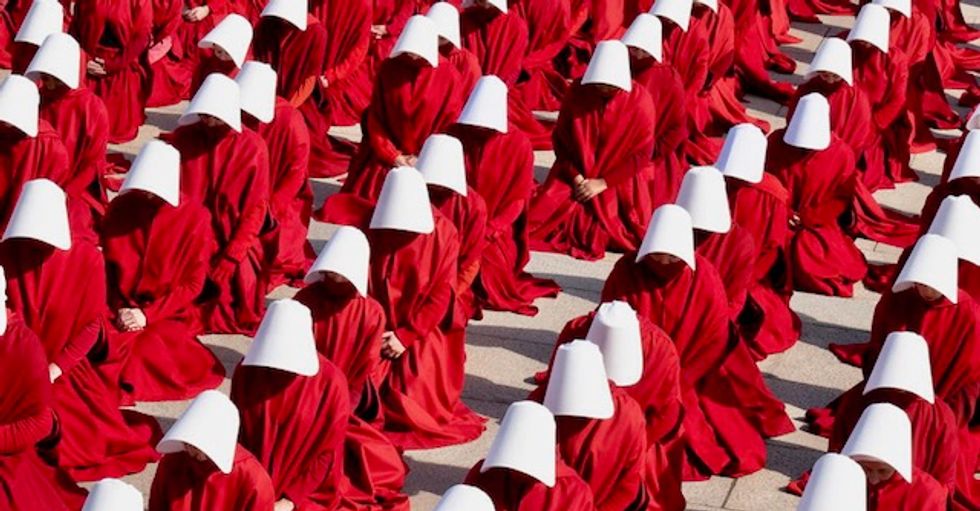 The new wave of abortion bans being passed by Republican-controlled state legislatures in Alabama, Georgia, Ohio, Missouri, Louisiana and elsewhere have spurred a fresh wave of women's rights activism, driven by fears that a judiciary appointed by President Donald Trump could finally achieve the destruction of Roe v. Wade and a return to the pre-1973 framework in which abortion was broadly criminalized around the country and hundreds of women a year died from botched illegal abortions.

But, wrote Michelle Goldberg in a new op-ed for The New York Times, the new anti-abortion legal regime Republicans are seeking to create would not actually be like the one in 1973: "It will probably be worse."

"While doctors were prosecuted for abortions before Roe, patients rarely were," wrote Goldberg. "Today, in states that have legislated fetal personhood, women are already arrested on suspicion of harming or endangering their fetuses, including by using drugs, attempting suicide or, in a case in Utah, delaying a cesarean section. There’s no reason to believe that, in states where abortion is considered homicide, prosecutors will be less punitive when investigating it."

Moreover, whereas the old abortion bans generally gave doctors themselves the power to decide what constituted a medically justifiable exemption, Goldberg wrote, "By contrast, the new laws seek to curtail medical discretion. Under the Alabama measure, doctors can perform abortions only when a woman is facing death or 'serious risk of substantial physical impairment of a major bodily function.' Otherwise, abortion is a class A felony, and ... the potential 99-year prison sentence it carries is far longer than any punishment a doctor could have faced in pre-Roe America."

"At least the Alabama law exempts people having abortions from prosecution. But they are not spared by the Georgia law, which, as Mark Joseph Stern points out in Slate, has language that criminalizes self-induced abortion. Nor are women who abort exempt from punishment in the most recent version of Louisiana’s six-week abortion ban," continued Goldberg. "Republican politicians in other states are clearly interested in locking women up; last month Texas legislators held a hearing on a bill that would allow women who have abortions to be charged with homicide and potentially subject to the death penalty. In a post-Roe future, the political fight, at least in red states, could shift from whether women can have abortions to whether they can be imprisoned for them."

"A lesson of fundamentalist regimes worldwide is that when reactionaries try to enforce their ideas about gender traditionalism, they can be more tyrannical than real tradition ever was," concluded Goldberg. "Rather than moving backward, we're charting awful new frontiers."