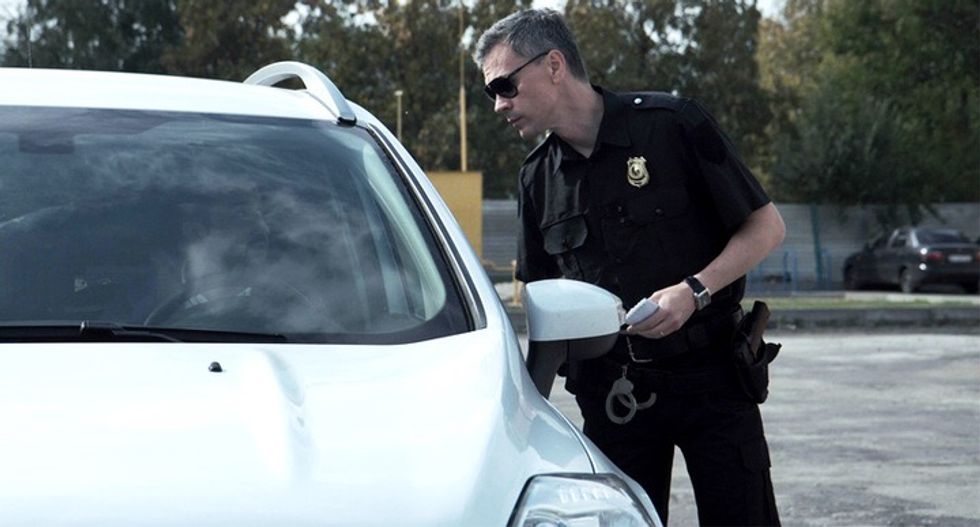 Police officer stopping the driver of a vehicle. (Shutterstock)

On Thursday, the Los Angeles Times detailed the case of Brian Allen, a 31-year-old dance instructor who was notified by the LAPD in 2018 that he was being added to CalGang, the registry of known gang members and their connections — something that came as a shock to him, as he was not a member of any gang.

The reason he was added? Police pulled him over in his South L.A. neighborhood a year before, when he happened to be giving a ride to an old friend from Crenshaw High School, an aspiring rapper with a criminal record. He was questioned, but neither of them were arrested or even accused of any gang-related activity.

But police argued that Allen needed to be registered because he was driving through his own neighborhood — which was listed as having gang activity — and in the company of his friend, who was alleged to be a gang member.

"I was stunned," said Allen, who is African-American. "You automatically get cast as [a gang associate] often just because of how you look and where you are."

The CalGang database has been accused of being a racial profiling tool, as 90% of the 90,000 people in the registry are black or Latinx. Moreover, it is much harder to be removed from the database than to be added to it, and a state audit in 2017 concluded that the database is riddled with errors.

Police insist that the information in CalGang is never used for fishing expeditions, or in immigration or employment checks, and is only for assisting criminal investigations — but even this limited use would still imply that people of color are disproportionately likely to be interrogated in connection with crimes.

The California Department of Justice is planning to release new guidelines this month placing restrictions on how CalGang information can be used.