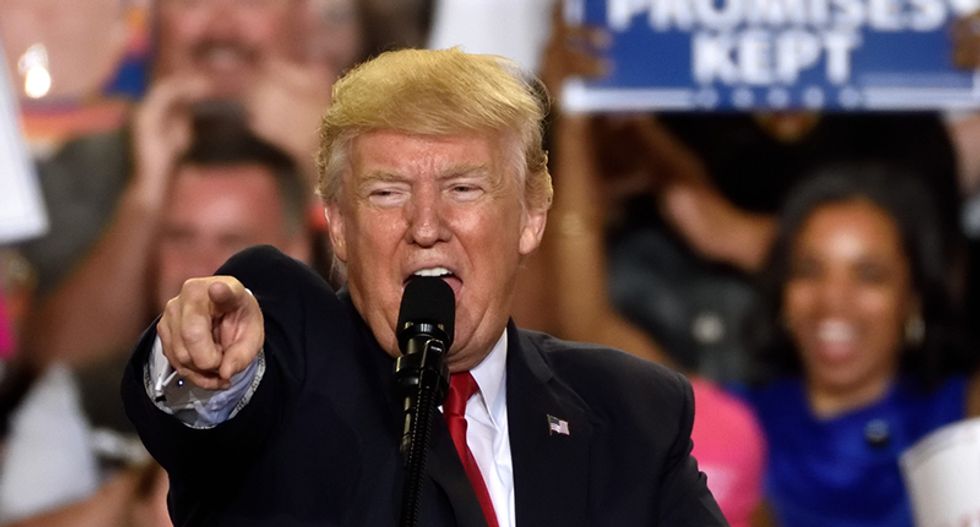 HARRISBURG, PA - APRIL 29, 2017: President Donald Trump points and shouts at what he calls the "dishonest" media during a speech to mark 100 days in office at the Farm Show Complex and Expo Center. (Photo: Shutterstock)

It isn't only about crumbling bridges or roads filled with potholes, the water problem in Flint, Michigan persists, and Flint isn't the only city with a water infrastructure problem.

But this week President Donald Trump blew up any opportunity for progress on the one issue he agreed on with Democrats. The Washington Post quoted a recent report from the Society of Civil Engineers that rated American infrastructure at a D+ grade. The ASCE report warned that the government needs to invest about $3.6 trillion on the infrastructure alone by 2020.

Trump spent 2016 claiming to be a dealmaker and a builder, but thus far he hasn't managed either. The one chance he had was making a deal with Democrats. Instead, he spent three minutes reprimanding them before leaving the room and holding a press conference to tell Americans he's on strike and nothing will move forward until investigations stop.

It gives Democrats a unique opportunity to prove their own leadership abilities to craft a bill with the few Republicans that are interested in talking to them and passing it out of the House. Democrats could even troll the president by including $1 billion for his border wall.

"We can no longer afford to wait," ASCE Executive Director Tom Smith told The Post. "Our infrastructure problem is not going to go away, and it's certainly not going to get better with time."

Local leaders are frustrated with Washington and the political stalemate. While states could step up with taxes that could fund the projects, the interstate system is supposed to be part of the federal government's obligation.

"It's exhausting," said Chicago-based Metro Planning Council President MarySue Barrett. "We're desperate in Illinois and in Chicago for infrastructure investment to jump-start our economy and are beyond frustrated that the federal government is not our partner."

Trump and Democrats were on the same side, briefly, with the president advocating for a $2 trillion investment. Republicans pulled away, unwilling to add that much to the national debt or raise taxes to fund such a project.

Conservatives saw an impending showdown: compromise their conservative values or go up against Trump. Anti-tax conservative Grover Norquist has slowly lost his influence as Trump happily proposes ways to spend money the country doesn't have while cutting taxes for the wealthy. He's likely frustrated seeing his own party fall, but when he spoke to The Post, he found a way to blame it on Democrats.

"Any Trump-proposed tax increase to fund a $2 trillion infrastructure deal would mount to 'fingerprints on the murder weapon' that would be used to convict Republicans in the next election," The Post summarized Norquist.

Either way, Trump is in trouble. Promising the American people a fix to infrastructure was part of Trump's 2016 pledge. As the president launches his 2020 campaign with the slogan "Promises Made, Promises Kept," he's putting himself in the awkward position of having to defend a broken promise.