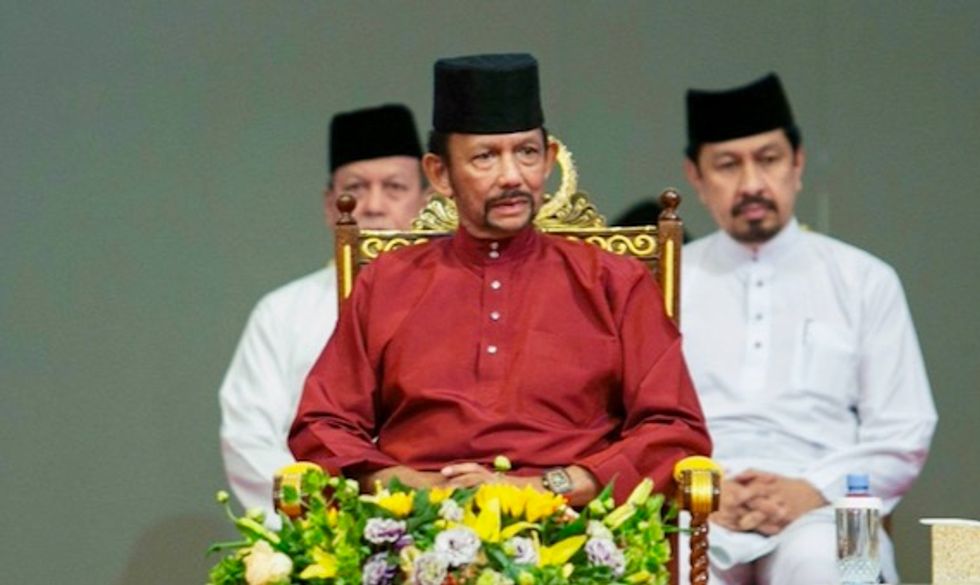 Brunei's Sultan Hassanal Bolkiah -- one of the world's wealthiest men, who has been on the throne over five decades -- announced plans for the sharia penal code in 2013 AFP/File / -

Brunei's sultan has announced death by stoning for gay sex and adultery will not be enforced after a global backlash, but critics Monday called for harsh sharia laws to be abandoned entirely.

In a speech late Sunday, Sultan Hassanal Bolkiah said a moratorium on capital punishment that already applies to Brunei's regular criminal code would also extend to its new sharia code, which includes death by stoning for various crimes.

The code, which also punishes theft with the amputation of hands and feet, fully came into force last month in the small sultanate on Borneo island, making it the only country in East or Southeast Asia with sharia law at the national level.

The move sparked anger from governments and rights groups, the United Nations slammed it as a "clear violation" of human rights while celebrities led by actor George Clooney called for Brunei-owned hotels to be boycotted.

In a televised address, the all-powerful sultan made his first public comments about the furore and took the rare step of addressing criticism, saying there had been "many questions and misperceptions" regarding the sharia laws.

"Both the common law and the sharia law aim to ensure peace and harmony of the country," he insisted, according to an official translation of his speech.

Some crimes in Muslim-majority Brunei including murder and drug-trafficking were already punishable with death by hanging under the regular criminal code -- which is enforced alongside the sharia code -- but no one has been executed for decades.

Hassanal said that "we have practised a de facto moratorium on the execution of death penalty for cases under the common law.

"This will also be applied to cases under the (sharia penal code), which provides a wider scope for remission."

But rights groups said the announcement did not go far enough.

"This announcement does nothing to address the many other human rights concerns about the (sharia code)."

The maximum punishment for gay sex between men under the sharia code is death by stoning, but perpetrators can also be sentenced to lengthy jail terms or caning.

Women convicted of having sexual relations with other women face up to 40 strokes of the cane or a maximum 10-year jail term.

Whipping and jail terms, as well as severing of limbs for theft, under the new code were not affected by the sultan's announcement.

It was not clear how far other sharia punishments would be enforced.

The sultan also vowed in his speech that Brunei would ratify the United Nations convention against torture which it signed several years ago.

Phil Robertson, deputy Asia director for Human Rights Watch, said that "the entire law is a human rights-abusing monstrosity that should be scrapped.

"It's a quaint but unrealistic idea that a temporary moratorium on the death penalty is worth something in a royal dictatorship where the sultan's word is law."

While gay Bruneians were relieved the death penalty for homosexual sex would not be enforced, they said the law still encourages discrimination against LGBT people in the former British protectorate of about 400,000 people.

"The announcement last night gave me and my friends some relief because honestly it does make you anxious when such laws are in place," a 32-year-old gay man, who did not wish to be identified, told AFP.

But Adam Rozman, a 24-year-old gay university student who gave a pseudonym, added: "I just wish that the country can one day remove laws that discriminate against gay people.

"We do exist and we are normal people who are in schools and universities, and have careers and contribute to the whole country."

The sultan -- one of the world's wealthiest men, who has been on the throne over five decades -- announced plans for the sharia penal code in 2013.

The first section was introduced in 2014 and included less stringent penalties, such as fines or jail terms for offences including skipping Friday prayers, but the harsher penalties were delayed for years after criticism.

Analysts say Hassanal is seeking to burnish his Islamic credentials and shore up support among the country's conservatives due to the waning fortunes of the oil-dependent economy, which has been ravaged by recession in recent years.