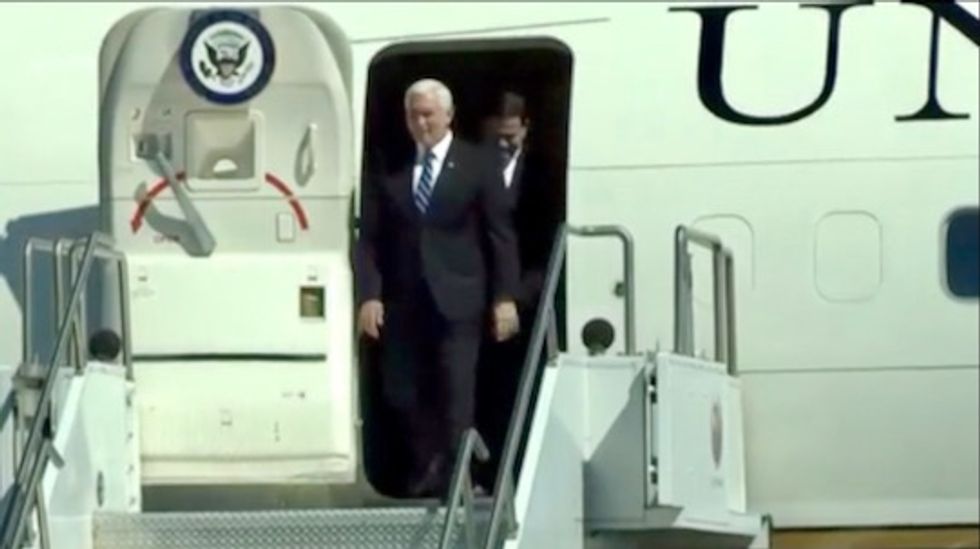 "Disputes over congressional subpoenas for documents and testimony, as well as legal battles over administration policies and Trump's businesses, finances and personal affairs, are moving inexorably toward a court Trump has sought to shape in his image," Wolf reported.

The Washington Post's Robert Costa reports on the "unusual group on Air Force Two today: Vice President, Senate Majority Leader, and Chief Justice all on the plane. Rare to have that trio together, particularly on a flight."

Rare indeed, especially given that the Trump administration has and will have a "deluge" of critical cases involving President Donald Trump and his administration's policies before the Supreme Court in the coming months, and possibly years.

(The three Republicans traveled Wednesday to the funeral of the late Senator Richard Lugar.)

Republicans went ballistic when former President Bill Clinton in June of 2016 spent 20 minutes speaking with then-Attorney General Loretta Lynch while her plane was on an airport tarmac.

CNN described the encounter as a private meeting, which was an exaggeration. They also quoted then-presumptive GOP presidential nominee Donald Trump's response:

"It was really a sneak," Trump told conservative talk show host Mike Gallagher. "You see a thing like this and, even in terms of judgment, how bad of judgment is it for him or for her to do this? Who would do this?"

Republican Senator John Cornyn lashed out, saying the incident "does nothing to instill confidence in the American people."

The chance encounter caused Attorney General Lynch to recuse herself from the FBI's then-ongoing investigation into Hillary Clinton's emails, which led to FBI Director Jim Comey's very public denouncement of the former Secretary of State and Democratic presidential candidate.

More than a year after the chance meet-up, Fox News was still reporting on it: