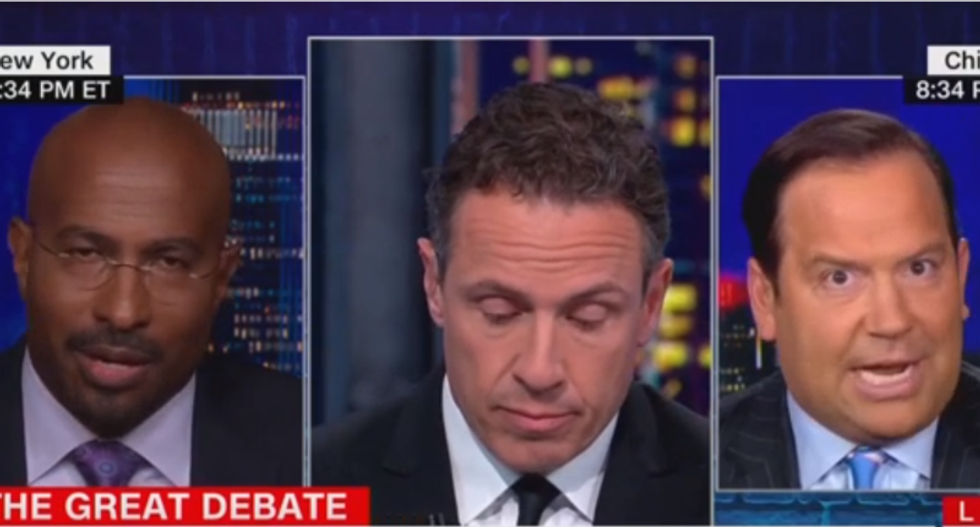 President Donald Trump's attempt to go after former Vice President Joe Biden for the 1994 crime bill has led to a flurry of reporters reminding the president's supporters for his history of overtly racist behavior — one of the most prominent episodes being his full-page ads in The New York Times to "bring back the death penalty" during the trials of the Central Park Five, who were ultimately exonerated.

But incredibly, in an exchange with CNN's Chris Cuomo and former White House special adviser Van Jones, Trump surrogate and economic strategist Steve Cortes tried to excuse Trump's treatment of the Central Park Five by arguing they really weren't that innocent — causing the whole segment to erupt into chaos.

"You ignored the premise of my initial question which was, Donald Trump has never apologized for — I always call him Mr. President but I'm talking about him then as a citizen, he wasn't president then, obviously, back in the late 80s — he's never apologized for it," said Cuomo. "He thinks they still did it! I can't believe that he believes that, but he says it. And I don't know why he feels that he can have high ground on this with what he did back then."

"Chris, I would love to get into all the facts of that night, of what happened with the Central Park Five, because they are not nearly as exculpatory to those five gentlemen as you want to believe," said Cortes.

"You can't just say no a thousand times and not let me talk!" said Cortes.

"Another guy's DNA was on the victim," said Cuomo.

"Correct, and that was never in dispute at trial," said Cortes. "The prosecutor in closing arguments said, yes, the actual rapist, the person who did the physical insertion is not here on trial. That was established from the very beginning. You can be convicted of rape even if you're not the one that did the actual raping."

"Steve, you are gonna go back — no," said Jones. "This is disgusting and pathetic on your part."