CNN's Chris Cuomo: Mueller has to keep saying why he didn't indict Trump because the White House keeps lying about it 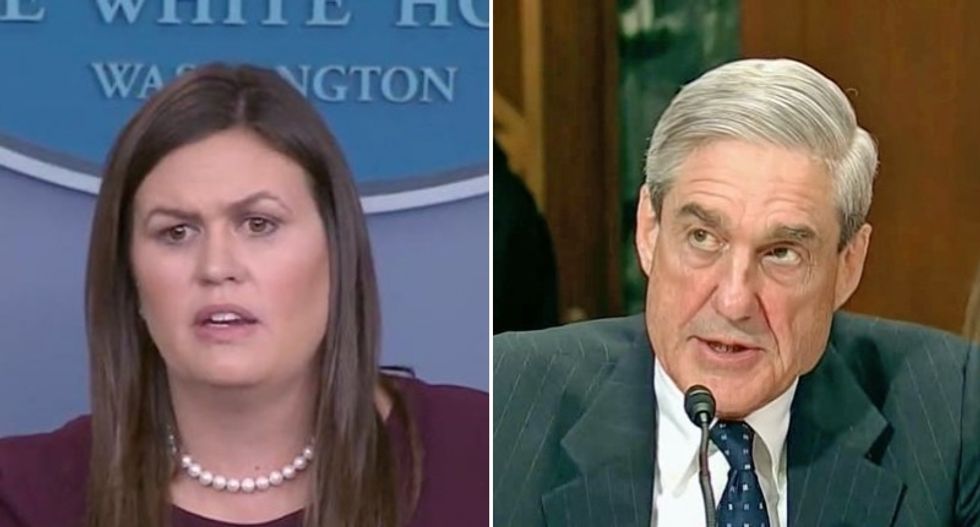 On Wednesday, CNN's Chris Cuomo laid out what made former special counsel Robert Mueller's resignation speech so significant for both President Donald Trump, Attorney General William Barr, and the White House generally — and why he keeps clarifying the Office of Legal Counsel's policy on indicting a sitting president.

"Bob Mueller is not on the same page with the A.G. and POTUS," said Cuomo, playing clips of the president calling the investigation a "witch hunt" before contrasting with Mueller's remark that "the matters we investigated were of paramount importance."

"Now, on that point it would seem our A.G. arguably misrepresented the reason President Trump was not charged with obstruction. In fact, he did so at least six times, including this." Cuomo then played a clip of Barr saying Mueller "made it clear that he had not made the determination that there was a crime."

"Now we know why those two guys behind him were looking like that the whole press conference," said Cuomo. "It doesn't match up. Why does Mr. Mueller keep saying the opinion is what kept him from pursuing? And that Congress has a role in moving it forward? And why didn't Mr. Sessions or Mr. Rosenstein tell us a year ago that there would be no charges possible against the president? Why have people thinking something was possible when it wasn't?"

"However, what is not suspicious is Mr. Mueller's mindset," said Cuomo. "He put it in writing back in March when he complained about Mr. Barr's four-page memo, that it did not fully capture the context, nature and somebodies tans of Mr. Mueller's work. He said his hands were tied as his first point in that part of the report and the man described as a sphinx for the last two years doubled down today." Cuomo showed Mueller saying, "Under longstanding department policy a president cannot be charged with a federal crime while he is in office ... Charging the president with a crime was therefore not an option we could consider."

"If it wasn't a fundamental part of his inaction, why does he keep mentioning it?" said Cuomo. "Here's why. Because of what came out from the White House just hours later." Cuomo played a clip of White House Press Secretary Sarah Huckabee Sanders saying, "He, Mueller spent two years, did an exhaustive investigation and came back to say that there was no wrongdoing by the Trump campaign or any American."

"That's just not true," said Cuomo. "Just like he said in his report, this lifelong Republican, Mr. Mueller, says if he could clear the president he would so state. Instead, Mr. Mueller laid out five instances in his report that all met his own high bar for obstruction of justice."

"Look, we've been arguing for a long time that we needed to hear from Mr. Mueller. This is why," said Cuomo. "You can say the president was exonerated but he wasn't. You can say this was a hoax but it never was. The attack on our election happened. It may well be worst the next time. And while the president continues to tell you it wasn't the Russians, Mr. Mueller says it was and it was bad and it should be a major concern for every American."

"That's what he said. And that's the truth," concluded Cuomo. "And it is now clear that the power of the presidency was abused to try and hide the truth. The only question that remains is what happens next."