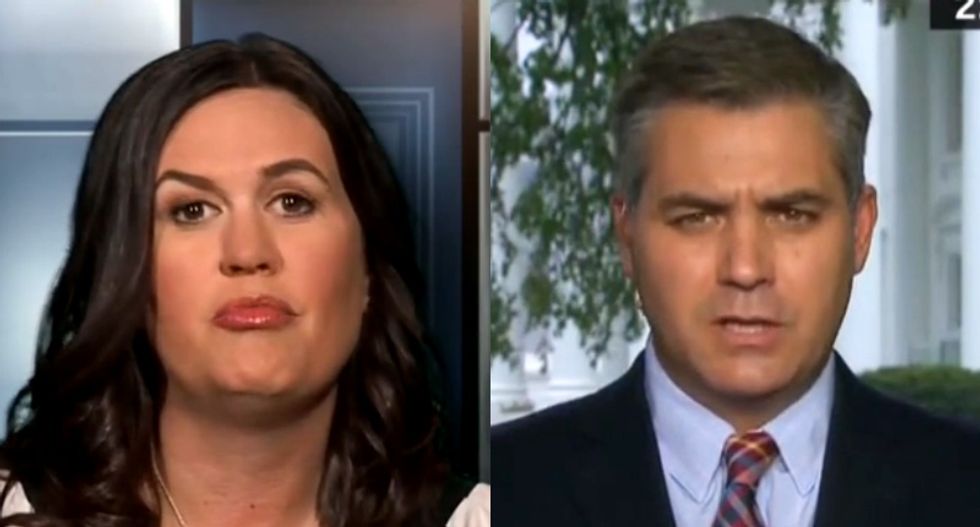 White House Press Secretary Sarah Huckabee Sanders has always had an adversarial relationship with reporters. She has accused journalists of being predominantly against the administration and divisive to the country, and has steadfastly defended President Donald Trump as he trashes the press as "fake news" and the "enemy of the people," and has openly longed for the ability to sue them.

Behind the scenes, however, her relationship with some of the reporters she trashes in press conferences might be more collegial.

That's according to CNN White House correspondent Jim Acosta, whose new book, The Enemy of the People, alleges that Sanders routinely met reporters for drinks and that she could "throw back her Maker's and Coke with the best of them."

Acosta and Sanders have clashed very publicly, with the most notable incident occurring last year when Sanders revoked Acosta's "hard pass" to the White House and claimed he had placed his hands on a White House intern. Reporters subsequently accused Sanders of lying about the incident and spreading manipulated footage to back up her story, and a federal judge appointed by Trump swiftly ordered Sanders to restore Acosta's credentials.

Acosta notes in his book that Sanders' accusation against him was a "disgusting smear" and says that "everything in my life began to spiral out of control" after the incident.