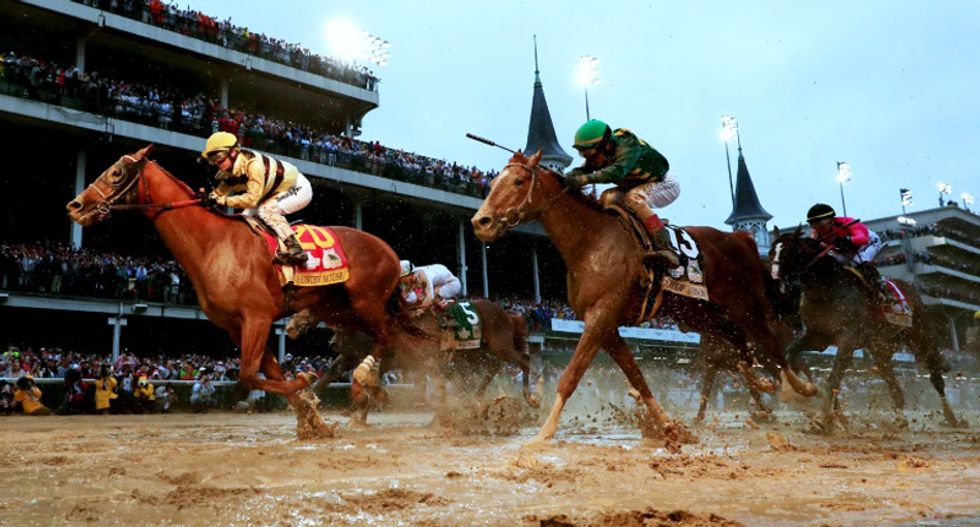 Country House, a 65-1 longshot, won the 145th Kentucky Derby on Saturday after wire-to-wire leader Maximum Security was stunningly disqualified from the top spot.

It was the first time the horse that crossed the finish line first in the Kentucky Derby was denied victory because it hindered another horse.

Maximum Security, trained by John Servis and ridden by Luis Saez, was running comfortably in front on the sloppy Churchill Downs track in Louisville, Kentucky, but the colt moved sharply out from the rail as the field turned for home.

After an objection and a nail-biting 20-minute review, he was ruled to have interfered with War of Will and other horses -- a move that stewards ultimately judged significantly affected the outcome of the race.

The result gave trainer Bill Mott a first Kentucky Derby victory at the age of 65.

"First of all, I think our horse ran great," Mott said. "As far as the win goes, it's bittersweet. I'd be lying if I said it was any different.

"You always want to win with a clean trip and have everybody recognize the horse as the great athlete he is. Due to the disqualification probably some of that is diminished."

"We had a pretty good trip and then when I came around the turn I was outside and all of a sudden there was a real move from the inside to the outside," Prat recalled as trainers, jockeys and a crowd of 150,729 waited in suspense for the outcome of the stewards' inquiry.

"I did actually claim foul," Prat later confirmed, as did the rider of Long Range Toddy.

"I thought (Maximum Security) had shifted out a lot. We had been slightly bothered in that incident."

Mott had no doubt that the right decision was made.

"This is horse racing," he said. "There are two horses in the race that lost all chance to win a Kentucky Derby (when Maximum Security veered off the rail). And they were in a position at that time to hit the board.

"I know the stewards had a very difficult decision," Mott added. "I'm glad I wasn't in their shoes. With that being said, I'm damn glad they put our number up."

But it was a massive blow for Servis and Panamanian jockey Saez, who said previously unbeaten Maximum Security was startled turning for home by the roar of the crowd.

Saez thought he had steadied his mount before any harm was done, but he ended up 17th in the 19-horse field.

"I thought I never put anybody in danger," Saez said.

Code of Honor finished second after the disqualification, followed by Tacitus.

"We had a lengthy review of the race. We interviewed the affected riders. We determined that the 7 horse (Maximum Security) drifted out and impacted the progress of the number 1 (War of Will), in turn interfering with the 18 (Long Range Toddy) and 21 (Bodexpress)," she said.

"Those horses were all affected, we thought, by the interference, therefore we unanimously determined to disqualify number 7 and place him behind the 18 -- the 18 being the lowest-placed horse that he bothered, which is our typical procedure."

Trainer Bob Baffert, seeking a record-equalling sixth Kentucky Derby victory a year after guiding Justify to the coveted Triple Crown, had three horses in the race but none was a factor.

Now it remains to be seen if Country House, having seized the first jewel of the Triple Crown in controversial style, can contend in the Preakness and Belmont Stakes.

Certainly the end to Saturday's race will do little to ignite enthusiasm for racing in America, where 23 horse deaths in a three-month span at Santa Anita racetrack in California have put the sport under scrutiny.

The only other time an apparent Kentucky Derby winner lost a victory was in 1968, when Dancer's Image tested positive for a banned medication and Kentucky racing officials redistributed the purse sometime after the fact, making Forward Pass the official winner.