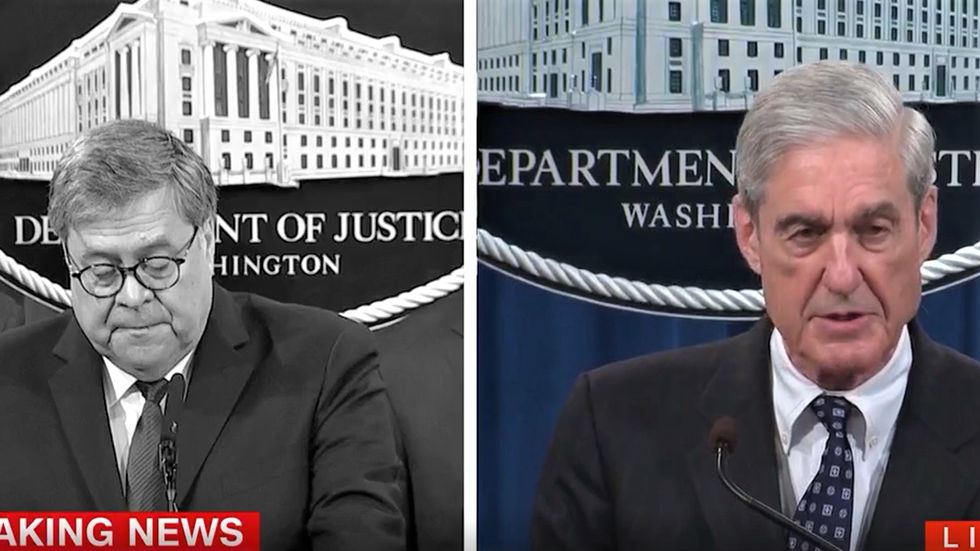 CNN's Brooke Baldwin on Wednesday showed a devastating side-by-side comparison of statements made by Attorney General Bill Barr and former special counsel Robert Mueller about the results of the investigation into Russian interference in the 2016 presidential election.

In the middle of a panel discussion in which former FBI agent Asha Rangappa accused Barr of "lying" about Mueller's final report in his four-page summary released two months ago, Baldwin decided to show side-by-side video clips of Barr and Mueller describing the special counsel's work to let viewers judge for themselves.

In the first clip, Barr stated that there "was no evidence of the Trump campaign collusion" with the Russian government to interfere in the 2016 election, whereas Mueller said that "there was insufficient evidence to charge a broader conspiracy."

In the next clip, Barr claimed that "the evidence developed by the special counsel is not sufficient to establish that the president committed an obstruction of justice offense," whereas Mueller said that "if we had had confidence that the president clearly did not commit a crime, we would have said so."

Rangappa also point out that Barr tried to claim that Mueller's decision not to charge Trump with a crime was not based on DOJ policy against indicting a sitting president, whereas Mueller emphasized that the DOJ's policy about indicting the president was a crucial factor in his final decision.