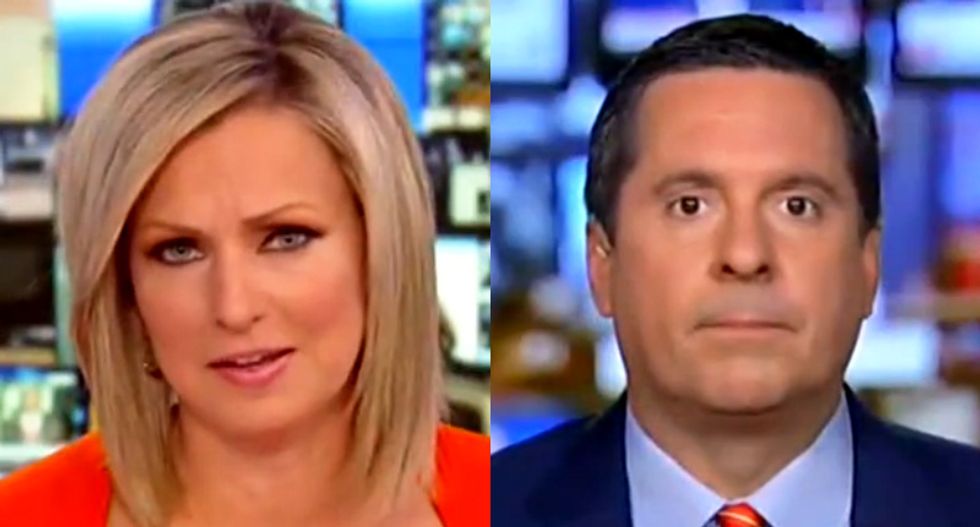 Rep. Devin Nunes (R-CA), an ardent supporter of President Donald Trump, appeared Friday morning on Fox News to react to new comments from Attorney General Bill Barr. But Nunes was called out after blatantly mischaracterizing what Barr had said.

"[Bill Hemmer] asked the question to the attorney general about what did Bob Mueller know and when did he know there was no collusion. Bob Mueller knew the day that he walked in the door there was no evidence of the Trump campaign colluding with Russians," the congressman said.

"Think about it. We spent tens of billions of dollars, right, collecting emails, phone calls, all the things that people know that we have the capability to do. We have human —"

"I don’t think that he has stated that publicly. I don’t know what evidence you have with that," Fox News host Sandra Smith interjected.

"No, what I’m saying is that Mueller," Nunes stumbled, "the attorney general didn’t answer that question but what I’m able to answer that because we looked at all the work. We looked at all the intelligence. We’ve known for — our report came out a year ago. Not only is there zero evidence of the Trump campaign colluding with Russians, period."

"To be clear... the attorney general's answer was that he could not say at what point Robert Mueller made that determination," Smith clarified.

"Right. That’s my point. I just wanted to make sure that I answered it for the American people and that’s why the attorney general is doing a good job here and not jumping to any conclusions," Nunes said.

Barr explained his decision to launch an investigation into the origins of special counsel Robert Mueller's probe in an interview that aired Friday morning on Fox News.

"I remember at the hearing about a month ago you said you’re trying to get your head around everything. What are you trying to figure out?" asked Fox News' Bill Hemmer.

"The first step is to find out exactly what happened, and we're trying to get our arms around that, getting all the relevant information from the various agencies and starting to talk to some of the people that have information," Barr replied.

Hemmer asked Trump's attorney general when Mueller knew there was no collusion with Russia.