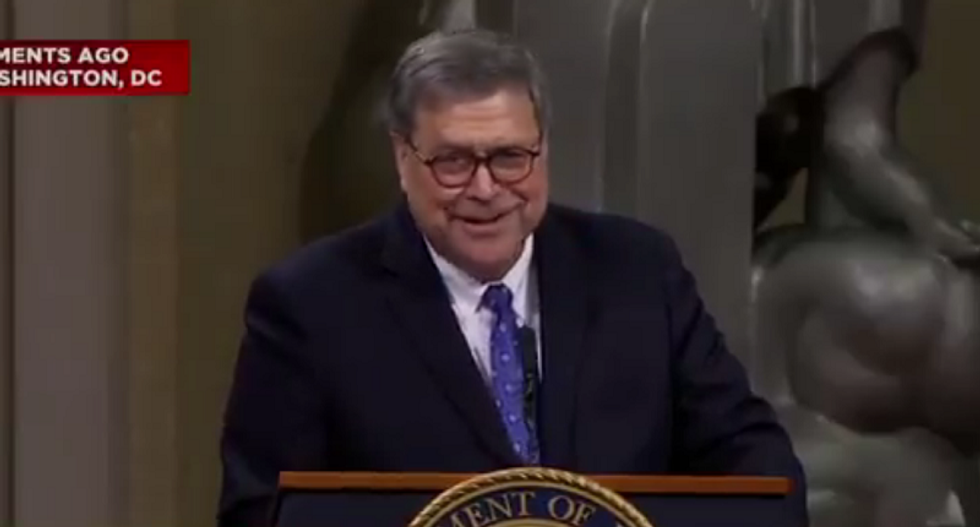 On Thursday, as Deputy Attorney General Rod Rosenstein officially stepped down from the Department of Justice, Attorney General William Barr laughed about being held in contempt of Congress during his speech.

"This must be a record of an attorney general being proposed for contempt within a hundred days of taking office," he chuckled, to general laughter from the audience.

On Wednesday, the House Judiciary Committee voted to hold Barr in contempt for failure to turn over the unredacted report from special counsel Robert Mueller's investigation of Russia, which he has been accused of distorting to politically protect President Donald Trump.

The redacted version of the report has already been released to Congress and to the general public. But Barr's refusal to submit the full report is seen as part of a broader, coordinated attempt by the Trump administration to refuse to comply with any proceeding related to congressional oversight.

It is not yet finalized when the full House will vote on the contempt resolution.

Bill Barr has jokes about being held in contempt of Congress. Because authoritarianism is lulz. https://t.co/4RGAtiIbMV
— Aaron Rupar (@Aaron Rupar) 1557428510.0