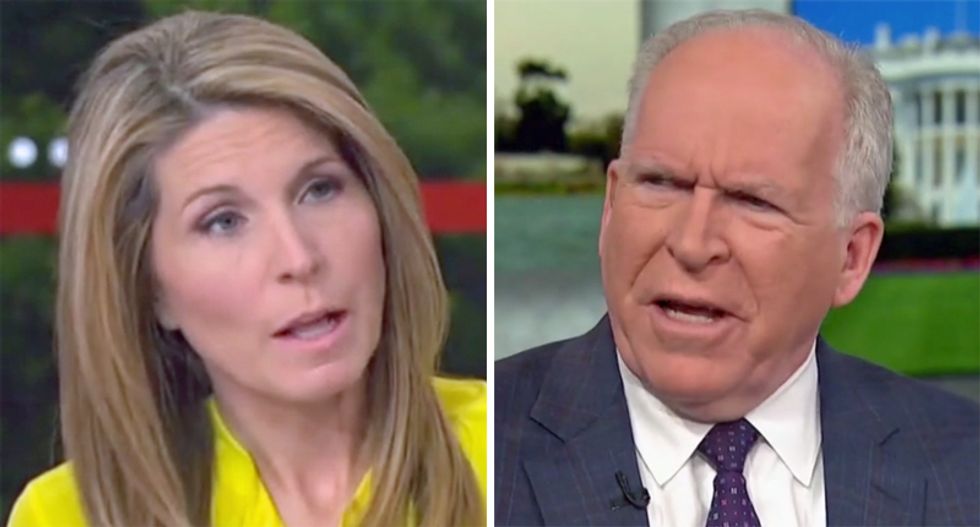 MSNBC anchor Nicolle Wallace asked the former director of the Central Intelligence Agency to explain President Donald Trump if he were leading a foreign country.

"If you were still doing intel work, and you went in to brief a president about a country that’s taken this swerve and their immigration policies are so severe that they are talking about rounding up families, that they are not pressing pause because that is a moral violation, but because they couldn’t iron out the logistics ... what kind of assessment would you give a policymaker if you were looking at America like a blind test, you didn’t know it was America?" Wallace asked. "You just saw someone putting in place these kinds of policies."

"I think we’ve seen it throughout the course of history, these authoritarian, tyrannical leaders will do anything to preserve power and to try to prevent any opposition or issue develop that could hurt them," Brennan replied.

"Words escape me to try to describe the depth of the cruelty, the immorality and lack of empathy that this administration, I think embodied by Mr. Trump, shows to young children and to families," he continued. "It just shows he has this very unemotional, again, unempathetic approach."

"What does it say when you’re examining a leader who has cruelty at the center of the policy like this and everyone around him goes along. Does that leader become more ominous?" Wallace asked. "What eventually stops a leader like that?"

"It becomes much more worrisome, because they feel empowered and because they have surrounded themselves with the sycophants, with the individuals that will allow him or her to do this. If I were briefing a president about an authoritarian leader, I would say this is the track they are on and the trends are not good and we can expect to see more of this, because he feels as though he can do it with impunity," Brennan explained.

"Unfortunately, Mr. Trump continues to go down this road. Not only will his staff and members of the cabinet support him, but the quislings in the Senate and House in terms of Republicans and what Lindsey Graham and others are saying now in terms of flouting the law, I think this just puffs up Mr. Trump’s chest to say I can do this. Damn be the law, damn be what American values are," he continued. "It’s really disconcerting and it should be to all of us."

"And what is coming down the pike between now and 2020, God only knows. He probably doesn’t know either," Brennan added.