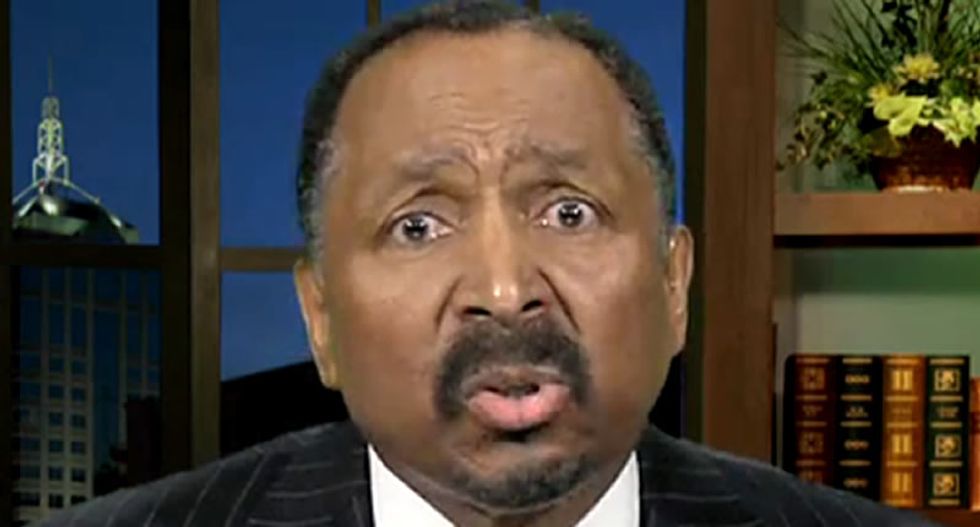 Virginia Republican E.W. Jackson says 2020 Democratic presidential candidate Pete Buttigieg Is "going to die and go to hell" because he's gay and refuses to "repent" for his "wickedness." He also compared the South Bend, Indiana mayor to a "temple prostitute," and – rebuking Buttigieg – says the devil, not God, creates gay people.

Jackson is a far right wing pastor who ran for the U.S. Senate in 2012 and 2018 and was the Republican Party's nominee to become Lieutenant Governor in 2013.

He "dedicated the bulk of his radio program yesterday to attacking Democratic presidential hopeful Pete Buttigieg for being gay and calling himself a Christian," Right Wing Watch's Kyle Mantyla reports.

Bishop Jackson, who has a long and ugly history of attacking LGBT people, went after Buttigieg for saying that he is both gay and a Christian, and for declaring that his marriage has brought him closer to God and made him a better person.

“What Pete Buttigieg said was not only a lie out of the pit of hell, it was a direct blasphemy against God,” Jackson proclaimed.

“He’s giving credit to God for a work of the devil. The devil makes homosexuals, not God," Jackson claimed. "The devil makes transgenders, not God. He perverts their minds and perverts their thinking and, who knows, he maybe even messes with them physiologically. They get molested at a young age and confused in their sexuality and then everybody is now expected to celebrate it.”

In March Jackson said that “homosexuals basically are trying to intimidate and cow Christians into bowing to their will,” which is also false.

“We’re not bowing,” he insisted. “They can do whatever they want to do. We’re not bowing … We Christians are never going to bow down. Never! You’ll have to kill us, but we won’t bow.”

Last month Jackson falsely claimed that Buttigieg is trying to turn America into a “homocracy.”