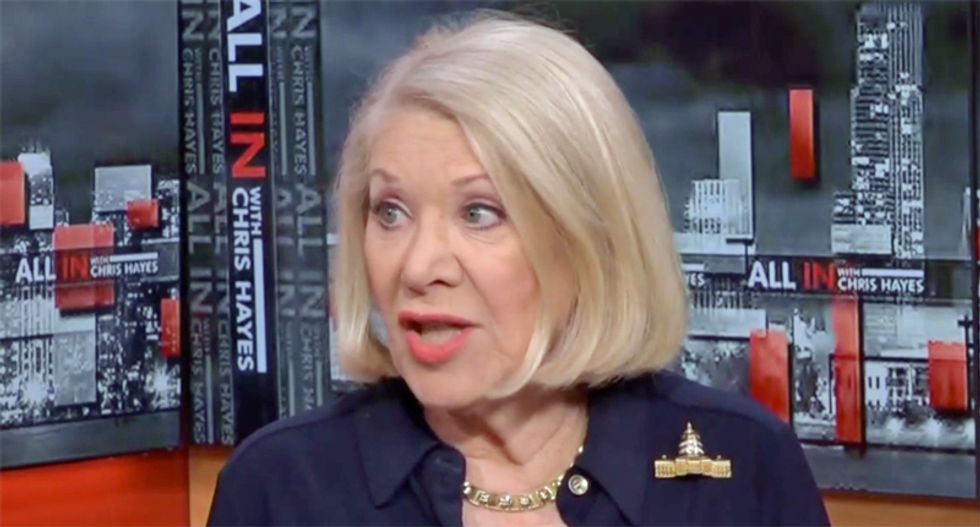 Former Watergate prosecutor Jill Wine-Banks presented a terrifying scenario of what could unfold if President Donald Trump refused to follow a court order as part of the White House effort to stonewall all investigations.

Wine-Banks was interviewed by Chris Hayes on MSNBC's "All In" on Friday for analysis of the role of the courts in settling the battle between Congress and the White House.

"The courts can expedite if they want to and clearly, my takeaway is the judges understand this is high stakes stuff and there has to be resolution of what is now a stalemate between the two branches," Hayes said.

"Right now Donald Trump is effectively eviscerating Congress and Congress has to act," Wine-Banks replied. "I really think -- although I have been cautious in saying we need fact-finding, people need to be educated, we have the public know what’s going on, we need to see live witnesses, not hear transcripts or have somebody summarizing it -- but we are getting to a point that the stonewalling is way beyond the Mueller report."

Hayes asked about a particularly tense period during the investigation into Nixon.

"There was a moment when the judge, when the Supreme Court orders Nixon to hand over the tapes. There was an open question about whether they will comply," Hayes noted.

"My memoir will include that fear of who will go into the White House and get them," she noted.

"You and which army?" Hayes replied.

"They have guns and guards and the Army and Secret Service. Are we going to send in the U.S. Marshals? They work for him, too," she explained. "I have to say in retrospect, we were never as seriously worried that the president wouldn’t comply. Michael Cohen warned us he’s not going to go quietly into the night if he loses the election. Now we have serious reason to worry that he will not comply. That would be a constitutional crisis."