The host explained that "today we’ve been watching the collapse of a con."

"Donald Trump’s cover story -- crafted with a heavy assist from Attorney General William Barr’s five pre-report appearances and statements -- came crumbling down today when Donald Trump woke up and realized that Robert S. Mueller clearly found evidence he obstructed justice and that he had unseemly contacts with a foreign adversary," Wallace said.

"The fatal blow to his fragile state may have come from the words on the bottom of the screen on his network of choice Fox News where they ran these words, 'no exoneration,'" she continued, showing a clip of Fox News personality Bret Baier on Wednesday.

"It was a far cry from Trump’s words, 'total and complete exoneration,'" Wallace noted. 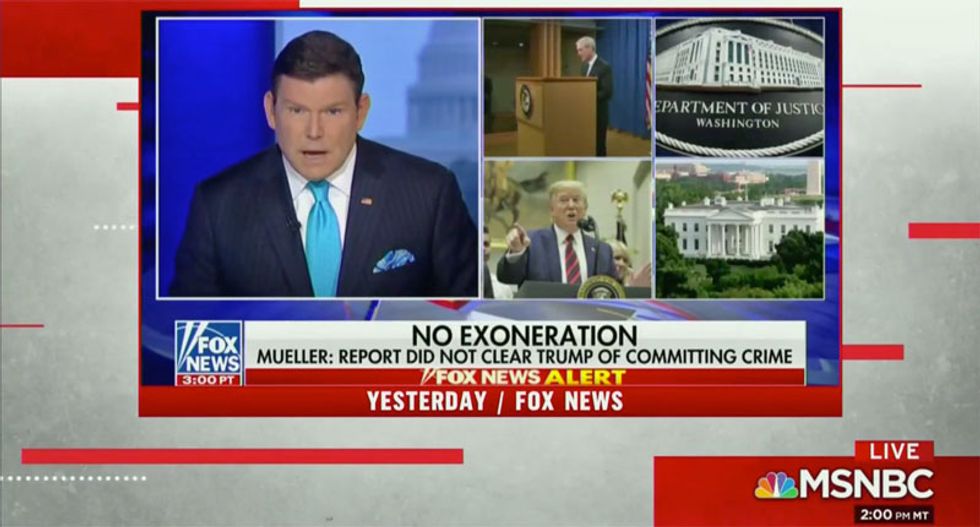 "To be caught in a lie is nothing new for Donald Trump, but to have been outed and revealed by a man like Robert Mueller, who could not be corrupted, baited or intimidated by Donald Trump’s mean tweets, seemed to undo the president," she observed.

The host played a clip from Trump's bonkers statements to reporters on the White House lawn, where he called Mueller's investigators "some of the worst human beings on earth."

"If you need any further evidence that Mueller’s performance yesterday left Trump stripped of his typical bluster, today he admitted that Russia helped him win writing on Twitter, 'I had nothing to do with Russia helping me to get elected,'" she explained.

"Of course, he saw the reaction on that from Twitter, got out of jammies to go the cameras and tried to clean it up, but the damage was done," she concluded.

Media Video Fox News
Report typos and corrections to: corrections@rawstory.com.
Like this article ? Text `Support` to 50123 to donate.
READ COMMENTS - JOIN THE DISCUSSION