From ‘Total exoneration!’ to ‘Impeach now!’ – the Mueller report and dueling fact perceptions

The Mueller report was supposed to settle, once and for all, the controversy over whether the Trump team colluded with Russians or obstructed justice.

Clearly it has not.

Reactions to the report have ranged from “total exoneration!” to “impeach now!”

Shouldn’t nearly 700 hundred pages of details, after almost two years of waiting, have helped the nation to achieve a consensus over what happened?

As the German philosopher Goethe said in the early 1800s, “Each sees what is present in their heart.”

Since 2013 – long before Donald Trump was even a candidate – we have been studying the “dueling facts” phenomenon: the tendency for Red and Blue America to perceive reality in starkly different ways.

Based on that work, we expected the report to settle next to nothing.

The conflicting factual assertions that have emerged since the report’s release highlight just how easy it is for citizens to believe what they want, regardless of what Robert Mueller, William Barr or anyone else has to say about it. 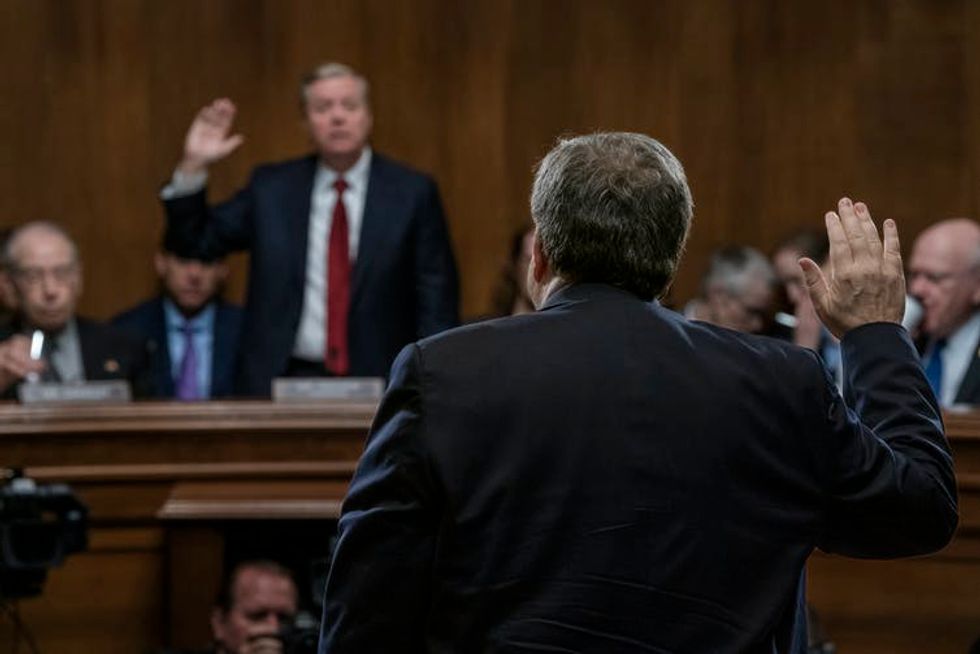 The Mueller report has sparked dueling perceptions of fact. Here, Attorney General William Barr, right, is sworn in to testify before Senate on May 1, 2019.

Our research has led us to several conclusions about the future of political discourse in the U.S.

The first is that dueling fact perceptions are rampant, and they are more entrenched than most people realize.

Some examples of this include conflicting perceptions about the existence of climate change, the strength of the economy, the consequences of racism, the origins of sexual orientation, the utility of minimum wage increases or gun control, the crime rate and the safety of vaccines.

This has serious implications for American democracy. As political scientists, we wonder: How can a community decide the direction they should go, if they cannot even agree on where they are? Can people holding dueling facts be brought into some semblance of consensus?

To figure that out, it is important to determine where such divergent beliefs come from in the first place.

This is the perspective we began with: If dueling fact perceptions are driven by misinformation from politicians and pundits, then one would expect things to get better by making sure that people have access to correct information – via fact-checking, for example.

We envisioned the dueling facts phenomenon as being primarily tribal, driven by cheerleading on each side for their partisan “teams.” We assumed, like most other scholars, that individuals are simply led astray by their team’s coaches (party leaders), star players (media pundits) or fellow fans (social media feeds).

But it turns out that the roots of such divergent views go much deeper.

Dueling facts: Climate change was referred to on an Obama administration EPA page, left; it was excluded on the Trump administration’s version of the page.

For example, according to our data from five years of national surveys from 2013 to 2017, the most important predictor of whether a person views racism as highly prevalent and influential is not her partisan identification. It is not her general ideological outlook. It is not the amount or type of media that she consumes. It is not even her own race.

It is the degree to which she prioritizes compassion as a public virtue, relative to other things like rugged individualism.

Values not only shape what people see, but they also structure what people look for in the first place. We call this “intuitive epistemology.”

For example, the perception that vaccines cause autism – against all available empirical evidence – is now shared equally by Democrats and Republicans. Partisanship cannot account for this dueling fact perception.

But when we looked at the role of core values and their associated questions, we found the strongest predictor. If someone we surveyed ranked this question highly, “Does it appear that people are committing indecent acts or degrading something sacred?” they were by far the most likely to believe that vaccines are dangerous.

Perhaps the most disappointing finding from our studies – at least from our point of view – is that there are no known fixes to this problem.

Fact-checking tends to fall flat. The voters who need to hear corrections rarely read fact-checks. And for those who might stumble across them, reports from distant and distrusted experts are no match for closely held values and defining identities.

Education is the another possible means of encouraging consensus perceptions, but it actually makes things worse.

Rather than training people how to think more reasonably, college and graduate school merely sharpen the lenses graduates use to perceive reality. In our data, those with higher levels of education are more, not less, divided. And the higher the level of training, the more tightly values and perceptions intertwine. Education provides the tools to more efficiently match their preferred values to their perceived facts.

Based on this evidence, we conclude that dueling fact perceptions (or what some have labeled “alternative facts”) are probably here to stay, and worsen.

We suspect that the Mueller report would have been rejected by roughly half the country, even if its conclusions had been definitive.

But with key phrases like “Accordingly, while this report does not conclude that the President committed a crime, it also does not exonerate him,” the report’s indecisiveness reinforces how difficult it can be to really know the “truth” about a lot of things.

If a respected prosecutor like Robert Mueller can’t offer a firm conclusion after two years of document dumps and interviews, what are the rest of us to do?

As with so many other things, people will go with their guts, using their heads to feel better about the choices they have already made.

Our conclusions are much more definitive than Mueller’s: We see clear evidence of collusion and obstruction. Collusion between values and facts. Obstruction of the capacity to observe and accept legitimate evidence.

So for the past couple of weeks, the chorus of “I told you so!” has rung out from the country’s Blue coastlines and from every Red mile of heartland in-between.

And with that, the U.S. continues to inch ever closer to a public square in which consensus perceptions are unavailable and facts are irrelevant.

New York (AFP) - Thousands of pro-Palestinian demonstrators rallied in cities across North America on Saturday, calling for an end to Israeli attacks on the Gaza Strip as the worst violence in years flared between the Jewish state and Islamist militants.