Goodbye Fourth of July: Our self-aggrandizer-in-chief is hellbent on making the theme of the day Trump’s America 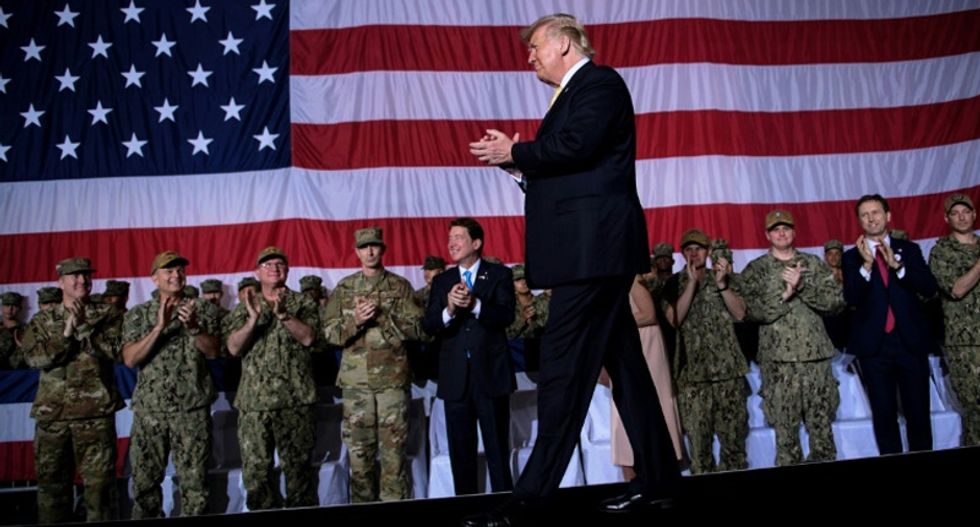 Years ago, I was interviewing the college roommate of a famous politician who told the story of being sent to a shop by the pol to pick up a large impressive trophy. It would be presented at an official school dinner that night. Is this for the university president, the roommate asked? No, the politician replied, without missing a beat, it’s for me.

That kind of 24-karat self-worth came to mind this Memorial Day weekend as I was watching Donald Trump present the first ever US President’s Cup, a four-foot high, 60-pound hunk of metal, at a sumo wrestling championship in Tokyo, part of his state visit. He violated several protocols of the highly formalized sport in the process and I distinctly got the impression that he would have preferred giving the prize to himself.

As The New York Times’ Katie Rogers reported, “a large Trump 2020 sign greeted the president as he approached the arena. And Mr. Trump seemed to make an entrance similar to those at any ‘Make America Great Again’ rally—he clapped, fist-pumped and waved, greeting the attendees as if they had assembled on his behalf.”

It was said of Teddy Roosevelt that he wanted to be the bride at every wedding and the corpse at every funeral, a supreme sense of self that has been far exceeded by Trump’s. (Although you have to wonder what TR might have been like in this age of social media: “Charge at San Juan Hill a cakewalk. Horses barely broke sweat. Cuba full of losers. #BigStick #Bully.”)

Trump’s favorite perks surrounding the office of being president revolve around a similar but exponentially greater grandiosity: he wallows in the overall pomp and circumstance of the job and the receiving of or presenting awards and honors; anything focusing on him that doesn’t take too much mental effort.

So as we enter the official beginning of summer with the Memorial Day weekend, we need to look ahead just a few weeks to the next big holiday and realize, with a shudder, that even the Fourth of July, that most patriotic of American celebrations isn’t safe. Solid ego and id, Trump has decided to make it all about him.

It began with a surprise tweet from him in late February: “HOLD THE DATE! We will be having one of the biggest gatherings in the history of Washington, D.C., on July 4th. It will be called ‘A Salute To America’ and will be held at the Lincoln Memorial. Major fireworks display, entertainment and an address by your favorite President, me!”

I’ve spent many Fourth of July holidays in DC – along with some inebriated pals, I once even managed to accidentally set fire to the median strip of the George Washington Parkway with some sparklers thrown from an apartment terrace after the fireworks ended. We rushed downstairs to stomp out the flames as motorists honked either their approval or outrage, I’m not sure which.

Until Trump’s sudden announcement of this Lincoln Memorial event and presidential address, the Fourth of July formula all these years has pretty much been the same in DC: small parade, folk life festival on the Mall, concert by the National Symphony with guest stars, fireworks, oohs, ahhs, applause.

But no, this year, Cheeto Benito, our self-aggrandizer-in-chief has to make the theme of the day Trump’s America and in so doing disrupt a city and federal plan for synchronizing events and crowd control that has worked reasonably well for quite some time. He’s planning a big speech, the location of the fireworks is changing, additional musical talent reportedly is being engaged and none of us yet know who’s paying for all of it. A good guess says it’s us.

Trump has “effectively taken charge” of the festivities, and made Interior Secretary David Bernhardt the overseer, according to The Washington Post: “The president’s starring role has the potential to turn what has long been a nonpartisan celebration of the nation’s founding into another version of a Trump campaign rally… The revised Independence Day celebration is the culmination of two years of attempts by Trump to create a major patriotic event centered on him and his supporters, including failed efforts to mount a military parade modeled on the Bastille Day celebration in France.”

The last time something like this happened was nearly fifty years ago, in 1970, when Washington’s Fourth of July was rechristened “Honor America Day,” exactly two months after the National Guard killed four kids at Kent State University in Ohio during protests against Richard Nixon’s invasion of Cambodia. (A week and a half later, police killed two more demonstrators at Jackson State University in Mississippi.)

In the wake of this violent national division, and bipartisan claims to the contrary, “Honor America Day” was created as a celebration of Richard Nixon organized by his pals J. Willard Marriott, the hotel magnate; the Rev. Billy Graham and Bob Hope.  As per historian Kevin Kruse, “Organizers self-consciously recruited conservative crowds, sending White House advance teams across the country to bring 350,000 members of Nixon’s Silent Majority to the capital by car, train and bus.”

I was there. I had been taking a course in filmmaking taught by a local priest at Washington’s free university. In the wake of the national student strike and antiwar demonstrations that had closed DC’s colleges, classes were done, so he and I decided to take the Super 8 mm camera we had been using and film the events of Honor America Day.

We met up early and began shooting the spectators dressed up in variations of red-white-and-blue finery and the many counter-protesters who had gathered as well. We worked our way over to the Lincoln Memorial where Billy Graham was leading a prayer service. Simultaneously, a smoke-in featuring red-white-and-blue joints began with lot of stripping down and jumping naked into the reflecting pool in front of the memorial. Meanwhile, a small group of young neo-Nazis shouted abuse. It was quite a scene.

Throughout the hot and humid day, there were confrontations between police and protesters. It all culminated in the evening when a nationally broadcast extravaganza hosted by Bob Hope and featuring a taped address from Nixon plus performances by Jack Benny, Red Skelton and Dinah Shore was broadcast from the Sylvan Theater near the Washington Monument.

Demonstrators pushed through police lines and tear gas was fired. But the gas, intended for protesters, accidentally drifted into the crowd there for the show and pandemonium ensued. The gas hit us, and I always swear this is true, it was while Kate Smith was singing “On a Clear Day You Can See Forever.”

The priest grabbed me by the hand and the two of us began to run as fast as we could away from the gas and the stampeding crowd. Absolute chaos.

So ended Nixon’s Honor America Day. And there’s a chance Donald Trump’s Fourth of July might end that way or worse. The aforementioned historian Kevin Kruse wrote a couple of years ago, “[A]ny effort by one side to claim the day as theirs, and theirs alone, invariably sparks an angry reaction from the other… ”

On Fourth of July holidays like Honor America Day and Trump’s upcoming Salute to America, “Americans sought to advance divisive issues by tapping into the day’s ceremonies and celebrations of national unity. But efforts to harness the holiday rarely ended well. Instead of bringing the nation together, they only served to illustrate just how divided it had become — or perhaps to remind us how divided it has always been.”

If Trump insists on making the anniversary of our nation’s birth a celebration of him, he will antagonize two-thirds of the country and perhaps thrill the other third that constitute his base. But his overreach will symbolize all that he has done to the country, trampling tradition and unity, trampling the tenets of the Constitution and Declaration of Independence that we commemorate on the Fourth, and trampling American democracy as no other president has ever done.