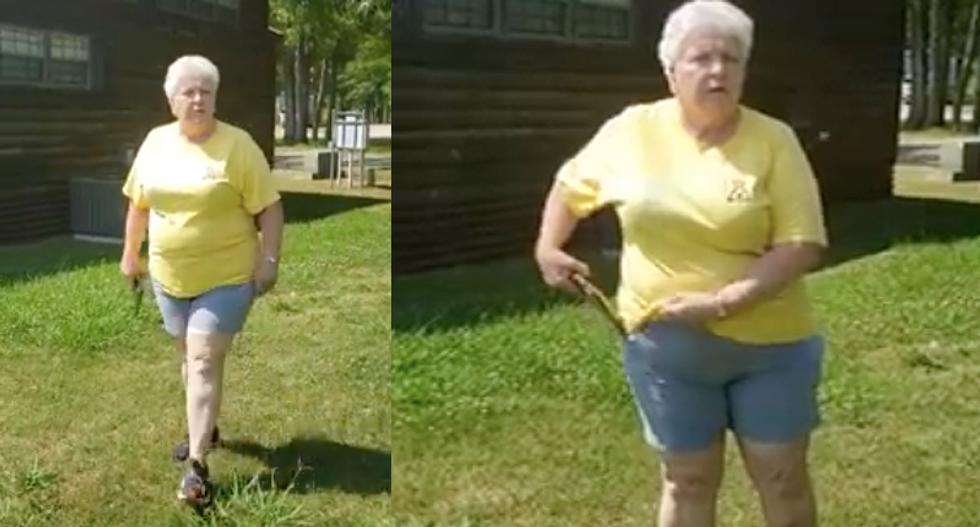 Add "camping while Black" to the long list of things white people find objectionable when they see it.

An employee at the Kampgrounds of America (KOA) took issue with a Mississippi couple walking through a park with their dog Sunday, The Clarion-Ledger reported.

"All you had to do is tell us you have to have a reservation and we would have left," said the woman filming the video. "You didn't have to pull a gun."

The gun-toting campground employee slowly put her handgun back into her pocket.

“Well I’m just telling you -- you need to leave because it’s under private ownership,” she said. “You can’t be out here.”

The Black couple tried to explain to her why they didn't think they needed a reservation to use the Oktibbeha County Lake, but the woman seemed disinterested.

Kampgrounds of America (KOA) is the world's largest company with privately held campground.

"KOA Inc. is aware of the situation that occurred Sunday, May 26th at the KOA franchise in Starkville, Mississippi," the company said in a statement. "KOA is currently looking into the matter and reaching out to all of the parties involved. Kampgrounds of America prides itself on providing a welcoming, safe environment for everyone to enjoy the outdoors.”

Missouri Attorney General Eric Schmitt, the Republican nominee for U.S. Senate in Missouri, decried an FBI raid of former President Donald Trump’s Mar-a-Lago resort, calling it an “unprecedented weaponization” of the Department of Justice against one of President Joe Biden’s political opponents. Schmitt cited several actions by the Department of Justice that conservatives have taken issue with — a letter asking the FBI to look into threats made against school board members, an audit of a local police agency’s concealed carry permits, lack of action against protests outside of the houses of U.S...