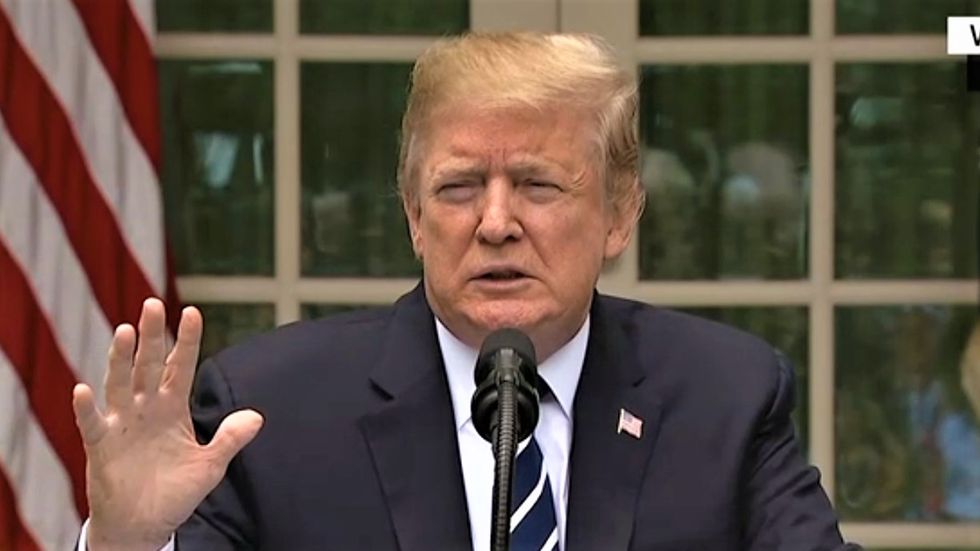 President Donald Trump delivered an angry and defensive rant in the White House Rose Garden on Wednesday in which he lashed out at House Speaker Nancy Pelosi (D-CA), who earlier in the day accused him of engaging in a "coverup."

The president often swung wildly from one grievance to another, and he regularly made baseless claims about supposed "crimes" that were committed by Democrats trying to undermine his presidency.

1.) Trump cancels all plans to work on rebuilding American infrastructure until Democrats agree to stop investigating him.

Trump told reporters that he was putting off all talks on infrastructure unless Democrats stop probing his administration.

"You can’t do it under these circumstances," the president complained. "So get these phony investigations over with."

The president alleged without presenting any evidence that his political opponents had tried to set him up to collude with the Russian government during the 2016 presidential election, and he attacked reporters for not repeating his wild assertions as fact.

"The crime was committed on the other side!" the president fumed. "This whole thing was a takedown attempt at the President of the United States. And all of you should be ashamed for the way you reported it!"

The president seemed particularly angry that Pelosi accused him of trying to conceal information about his past actions from the American public.

"Instead of walking happily into a meeting, I walked into a meeting with people who said I had done a coverup," Trump said. "I don't do coverups."

In fact, Trump's personal attorney last year pleaded guilty to making an illegal campaign contribution under Trump's instructions to cover up his past affair with adult film star Stormy Daniels.

4.) Trump regularly refers to himself in the third person while trying to discredit the Mueller investigation.

"They hated President Trump," Trump said of Mueller's team of prosecutors. "They hated him, with a passion."

5.) Trump freaks out about Democrats even discussing impeachment.

Although Speaker Pelosi is still holding the line against firing up impeachment hearings, Trump grew furious at the idea that the word was even being discussed.

"All of a sudden I hear last night that they’re going to have another meeting about the 'I-word,'" Trump said, referring to impeachment. "The 'I-word!' Can you imagine? I don't speak to Russians about campaigns! It's a hoax! The greatest hoax in history!"