How Trump scapegoats the most vulnerable to mask his incompetence and impress his followers: Trauma expert 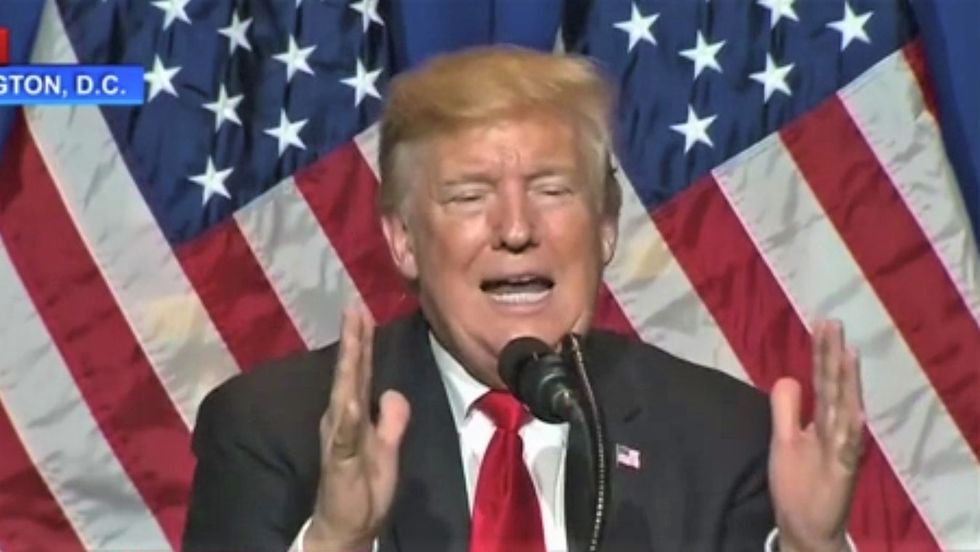 President Donald Trump seems uniquely obsessed with undoing the legacy of Barack Obama, pulling the US out of the Iran nuclear deal and trying to gut the Affordable Care Act. He's also taken a zero-tolerance approach to immigration, leaving undocumented people living in the US more vulnerable than ever. That involves emboldening ICE to go after migrants, including in sanctuary cities, where local law enforcement isn't supposed to share information with the federal agency. He's also undermined DACA, an Obama policy that  protects students who came to the US as children.

All of that combined has a corrosive effect on the mental health of immigrants and their families. It also presents the unique relationship the president and his most ardent followers, where they remain worshipful no matter how much he stumbles as long as he can scapegoat more vulnerable groups.

Raw Story spoke with Rosa Maria Bramble, L.C.S.W., who runs a clinical and forensic psychosocial service in New York City. She conducts psychosocial evaluations and provides expert testimony in immigration cases. She is a lecturer at Columbia University School of Social Work and trains students and service providers on trauma-informed service delivery. She founded Borders of Hope to increase trauma awareness in Latino immigrant communities. She is a contributor to “The Dangerous Case of Donald Trump: 37 Psychiatrists and Mental Health Professionals Assess a President,” edited by Bandy X. Lee (dangerouscase.org).

Raw Story: Why do you think this administration is obsessed with curbing immigration?

Targeting immigrants is part of a policy of scapegoating, which is not new. When a president who is incapable of leading, he has to distract from the real sources of problems, and immigrants are unfortunately the current President’s targets.

Raw Story: The President's own wife is an immigrant. How does he justify this?

Rosa Maria Bramble: His own wife, mother, and grandfather benefitted from a nation that had a generous immigration policy, opening its arms to the poor, the tired, and those yearning to be free. We are a nation of immigrants that has passed down the generosity we received. The generosity that has informed our immigration policy has resulted in immigrants embracing the United States as their home, and with that contributing enormously to the economy, to the richness of the culture, arts and sciences, and the nation’s success. For immigrants living in the United States, their new home has been a source of pride and achievement.

I have worked for more than fifteen years with immigrants, asylum seekers, and refugees, providing psychotherapy and community-based services. My parents inspire my work, as they fled a political upheaval in Venezuela to seek stability, employment, and educational opportunities for their family. I dedicated myself to serving individuals seeking refuge from violence and persecution based on their political, religious beliefs, ethnic, and sexual identity. I also work with asylum seekers, DACA recipients, children, families, and mental health providers.

The President is unable to pass on the generosity he and his family received, and that is why he blocks off that part of his history.

Raw Story: How do his followers process this obvious hypocrisy?

Rosa Maria Bramble: They will follow his lead on where to direct their hate and anger, and currently, the President is directing it against specific populations, worsening their trauma. Through my practice, I gain a window into the abuse, torture, and exclusion an individual suffers solely due to their identity and circumstances. I bear witness to the worst of human experiences. Despite their profound trauma, my clients demonstrate incredible resilience, remarkably transforming their suffering into purpose when given the chance to live freely and safely. For thousands of refugees and asylum seekers, the United States no longer offers this.

Raw Story:  The ongoing theme of the Trump administration is the fear mongering about immigrants. What in Trump's psychology makes him inflate a threat where, as you say, very little exists?

Rosa Maria Bramble: Scapegoating has little to do with real threat. In fact, it often happens against helpless groups that the administration can push around. The presidential campaign, election, inauguration, rhetoric, and consequent anti-immigrant policies served as cumulative stressors to an already vulnerable community. I discussed posttraumatic stress and the prevalent phrase, “Post-Trump Traumatic Stress” (similar to the “Trump Anxiety Disorder” Dr. Jennifer Panning described). Undocumented immigrants were experiencing symptoms classically consistent with traumatic stress: anxiety, uncertainty, fear of their surroundings, hypervigilance, and nightmares.

My daily commute passes through avenues where day laborers abound, waiting for and seeking daily work. After the inauguration, the streets were suddenly absent of workers under this spell of fear and silence. Queens, which is considered one of the most diverse areas in the world, visibly experienced the fear. People were out less, and storeowners reported that business was down. The eeriness of the silence following the inauguration felt similar to days after the collectively traumatic terrorist attacks of September 11, 2001. In this case, the Latino immigrant community was specifically targeted and left in fear. Communities that have faced ostracism also experienced vulnerability. One of my clients, a son of Holocaust survivors, feared an increase of attacks on the Jewish community.

The week of January 27, 2017, was one of the most difficult in my professional career. On that day, an executive order was signed, blocking entry from seven countries in the Middle East and Africa. This “travel ban” raised fear and terror not just among refugees and asylum seekers from the selected regions considered a “threat to national security,” but also for all immigrants. They received a clear message: “You are not welcome, and you are no longer safe.” It represented deliberate action and the fulfillment of the anti-immigrant rhetoric that had persisted. While the travel ban has been revised due to numerous acts of protest, advocacy, and court decisions, the Trump administration instantly set the tone of their administration: the United States is not open to refugees, asylum seekers, or other immigrants.

A “Zero Tolerance” policy, which the current administration has enhanced, sent adults charged with illegally crossing the border directly to federal court. Their children were sent to the Department of Health and Human Services’ Office of Refugee Resettlement, which works with shelters or relatives in the United States. From April to May 2018, approximately 2,654 children had been separated from their parents and detained.

I think of the hundreds of people I have worked within the LGBT community who are persecuted because of sexual orientation, women who have undergone female genital mutilation, and men and women who are tortured because of their political opinions. I reflect on conversations with a Chinese client who was tortured because of her religious practices. I remember a lesbian client who was sexually abused as a teenager in South America because the male perpetrator said, “I’ll show you what you need,” and I wonder about a young man from El Salvador who was discriminated against because of his indigenous identity and also had to flee gang recruitment attempts. They were able to find a home and a future in the United States.