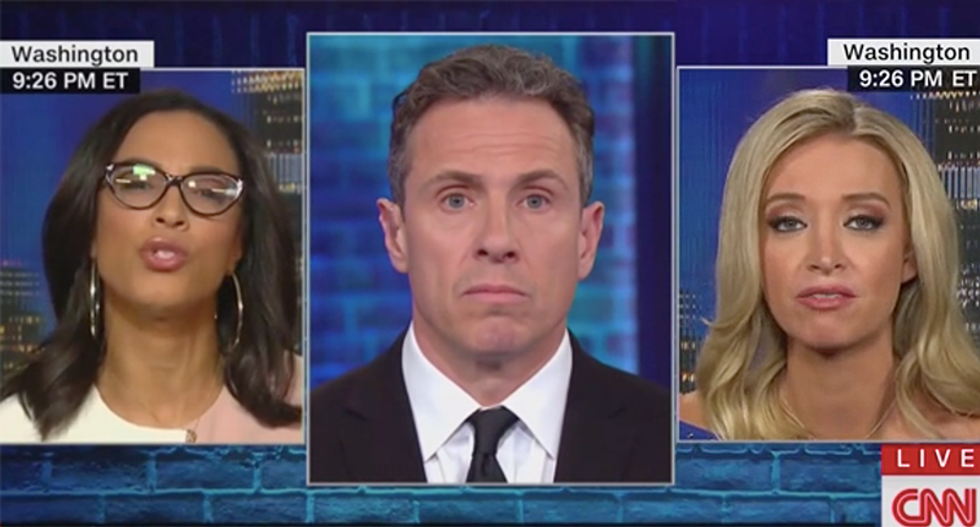 On Tuesday, CNN's Chris Cuomo and Angela Rye asked President Donald Trump's 2020 campaign press secretary and former RNC spokesperson Kayleigh McEnany why Trump, who declared a national emergency to construct a border wall, cannot simply declare one to provide humanitarian relief to the asylum seekers suffering at the border — and the conversation went off the rails quickly.

"No arguing the facts here," said Cuomo. "We know they're overrun and they can't handle it. We know they're begging for help. Nothing is coming. The president could use the emergency declaration to help with emergency resourcing. Why not be the hero?"

"Democrats for a long time said there's no humanitarian crisis. In fact there is one," said McEnany.

"Why doesn't he do something?" Cuomo pressed her.

"He said 4.5 billion in emergency funding is what I need for humanitarian assistance, no strings attached, no wall," said McEnany. "Where is Nancy Pelosi passing this through Congress? We need Congress to appropriate the money. President Trump's ready to sign it."

"Senate hasn't put it on the floor," said Cuomo. "He can do things with the emergency declaration that would tap pockets just like he did for fencing. But he's not doing it. It sends a message that what he cares about are the bad guys, not helping the kids."

"Here's what we have to remember when we're making policy in this country," said Rye. "There's always a human face attached to the policy. If a woman is willing to take her kids out of school from whatever country she originated or the family originated, there has to be a reason for that. I would submit to you the answer is not Lindsey Graham's new proposed legislation, where he is willing to now detain migrant children up to 100 days. In April, over 100,000 people were detained and 60% for families and children."

"Humanity has been distanced from policy and any time that happens you have a crisis," said Rye. "The crisis is one of consciousness. The crisis is one of mortality. It's one of human rights nature and we cannot divorce ourselves from that. Is he willing to tell us that the rapists and drug dealers he talked about during his campaign are these families and these children? I think not."

"You and I are Christians," Rye added, over McEnany's protests. "We are believers, and at some point social justice has to be a part of policy making. At some point. So we can't continue to say our Christianity, the Bible we read, only applies to law abiding citizens who didn't seek asylum. We have to at some point say there's a reason why they're coming to this border. All ye who are heavy laden. They can't come through the border?"