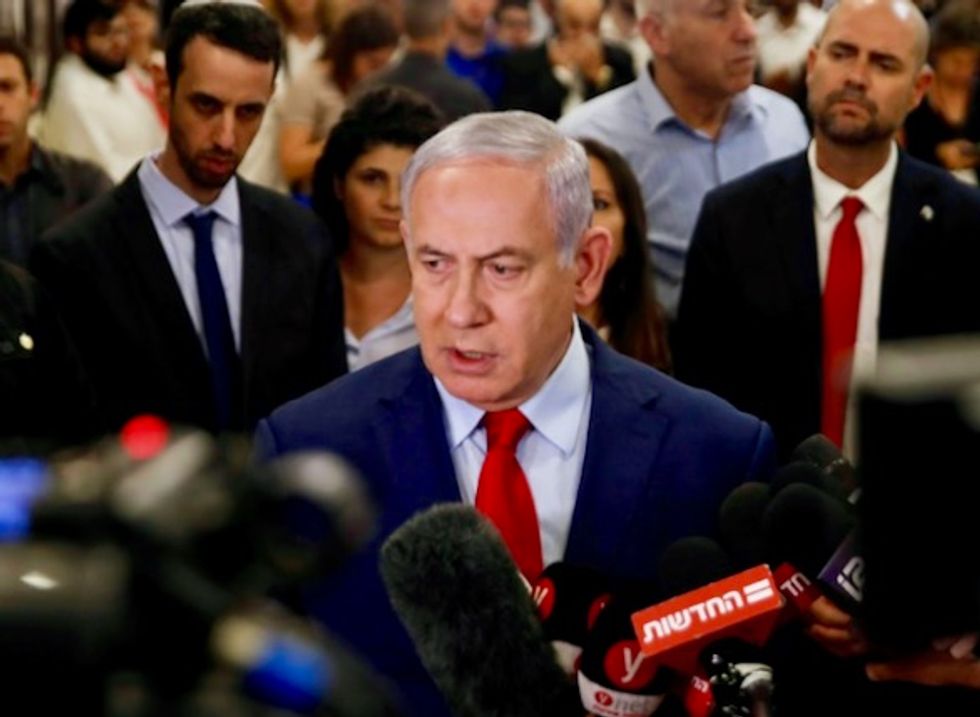 Israeli Prime Minister Benjamin Netanyahu was confronted with one of the biggest defeats of his political career Thursday after failing to form a coalition and opting instead to hold an unprecedented second election.

Israel will now head to the polls again on September 17, just over five months after an April election that saw Netanyahu and his right-wing and religious allies win a majority.

But as Wednesday's midnight deadline to form a coalition approached, Netanyahu was unable to convince ex-defence minister Avigdor Lieberman to abandon a key demand and join the government.

That led Netanyahu to instead move forward with his plan B and hold a parliament vote on new elections, which was approved just after the deadline in the early hours of Thursday.

It prevented Netanyahu's nightmare scenario of Israeli President Reuven Rivlin naming someone else to try to form a government, but also sent the country into what is likely to be another divisive and costly election campaign.

AFP/File / JACK GUEZ Israel now faces another divisive election campaign just five months after the last one, as a weakened Netanyahu fights for his political life

Netanyahu's inability to form a coalition showed his long tenure atop Israeli politics may be weakening as rivals eye his downfall in the not-so-distant future over corruption allegations, some analysts said.

"Netanyahu is a very strong person and personality. He is not someone who gives in so easily, but definitely it could signal a possible beginning of the end," said Hebrew University political scientist Abraham Diskin.

"He is going to fight. But definitely he is not as strong as he was in the past."

In a matter of weeks, Netanyahu has shifted from victory celebrations to tense, behind-the-scenes efforts to ensure his long tenure in power continues.

The stakes could not be much higher for the 69-year-old premier.

Netanyahu is facing possible indictment for bribery, fraud and breach of trust in the months ahead and is reportedly seeking legislation in the new parliament that would result in him being granted immunity.

He is also on track to become Israel's longest-serving prime minister in July, surpassing founding father David Ben-Gurion -- and he is no doubt aware of the weighty milestone.

Lieberman wants legislation he supports aimed at having ultra-Orthodox Jews perform mandatory military service, like other Jewish Israelis, to be approved without changes.

The issue is highly sensitive in Israel and the legislation is opposed by ultra-Orthodox parties, who control 16 seats in parliament and are a key part of Netanyahu's alliance.

Netanyahu sought to place full blame on Lieberman after the parliament vote, alleging he "had no intention to reach agreements and just wanted to bring down the government."

"We will have a clear and strong election campaign and win," he said.

Lieberman repeatedly described his refusal to go along as a matter of principle.

He has long championed the issue and speaks out regularly against attempts by the ultra-Orthodox to impose religious restrictions on Israeli society at large.

"We want a nationalist and right-wing government, not a religious one," he said at a Thursday press conference.

"Israelis are fed up with capitulation before the ultra-Orthodox."

While the prime minister and Likud members blamed Lieberman, others pointed to Netanyahu's legal troubles as an obstacle.

AFP/File / JACK GUEZ Thousands of Israelis, including Blue and White leader Benny Gantz, demonstrate against their "crime minister" in Tel Aviv, many of them wearing fezzes in protest at what they see as Netanyahu's attempt to rule the country like an Ottoman sultan

The main opposition Blue and White, a centrist alliance involving several former military chiefs, said a unity deal with Likud would be possible if Netanyahu would allow someone else from his party to form a government.

Blue and White's leaders say they cannot join a government led by Netanyahu given the corruption allegations he faces, while the premier is seen as wanting partners willing to support legislation that could give him immunity from prosecution.