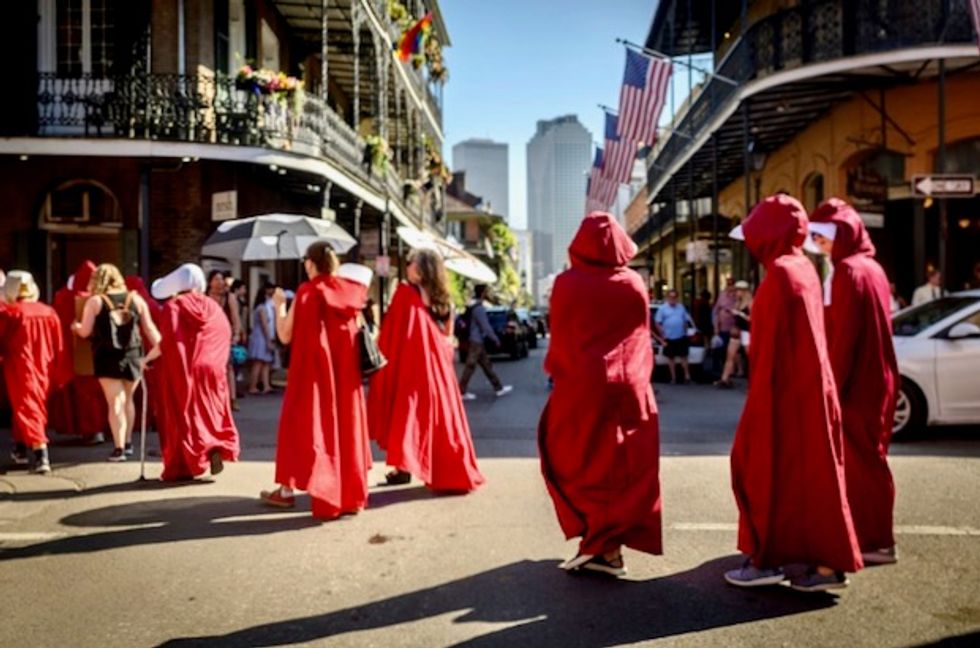 Protesters, dressed as characters in the dystopian novel and TV series "The Handmaid's Tale," march through the French Quarter of New Orleans, Louisiana, on May 25, 2019, to protest the bill to restrict abortion AFP/File / Emily KASK

Louisiana lawmakers on Wednesday passed a bill banning abortions once a fetal heartbeat is detected, joining a string of other US states restricting the termination of pregnancies as early as six weeks.

The bans are expected to be blocked in lower courts, but supporters plan to appeal such decisions until they reach the Supreme Court.

They hope this will lead to the long-sought conservative goal of overturning the landmark 1973 ruling known as Roe v Wade, which recognized women's right to abortion.

The measure -- which includes exceptions for cases in which a woman's life is at risk or the fetus has a fatal condition -- passed the Louisiana House of Representatives with a vote of 79-23 after being approved in the Senate by 31-5, according to the legislature's website.

It now goes to the desk of the governor, who said he plans to endorse it.

"As I prepare to sign this bill, I call on the overwhelming bipartisan majority of legislators who voted for it to join me in continuing to build a better Louisiana that cares for the least among us and provides more opportunity for everyone," Governor John Edwards said in a statement posted on Twitter.

Planned Parenthood, which offers abortion services, said Louisiana "is part of an alarming and widely-opposed national trend of bans criminalizing abortion before many women even know they're pregnant, threatening women with investigation, and promising to throw doctors in prison for doing their jobs."

"Banning abortion will not stop abortion -- but it will end access to safe, legal abortion care," Leana Wen, the president of the Planned Parenthood Action Fund, said in a statement.

"These politicians in 2019 are deliberately putting women's lives at risk. This is not about medicine or science, but power over women's bodies," she said.

Several other conservative southern US states have passed similar measures in recent weeks, including Alabama, whose anti-abortion law is the strictest in the country. It amounts to a near-total ban on ending a pregnancy, even in cases of rape and incest.

Performing an abortion would be a crime that could land doctors in prison for 10 to 99 years.

Like the Louisiana measure, the Alabama bill includes exceptions if the life of the mother is in danger or the fetus has a fatal condition.

Conservatives are ultimately counting on support at the highest court in the land.

Conservative-leaning Chief Justice John Roberts is seen as the potential swing vote if the constitutionality of abortion eventually comes before the court.